Do, start and keep trying

. This is the story of a chance meeting.

The Southsiders share many passions, from bikes to surfing, therefore it was only natural that my neighbour Julien who shares the same interests has recently become integrated to the Southsiders’ crew. The Norton that we are showing you today has been a long challenge for me. As a matter of fact it got me thinking as to why do we only see rigids based on Triumphs or BSAs and never on  Commandos? It’s an unanswerable question for me but we are very proud of the finished build

A couple of years ago I went to see my neighbour who was reputed to be an authority on old motorcycles to show him a beach cruiser I had recently bought. We talked,then visited his garage where I saw an old Mercedes,a bettle,Ducati,Moto Guzzi,Norton and a Triton.

For me everything started from meeting Vincent. Then I began to follow the Southsiders blog and attend some events they organised at the shop "Eastside" in Toulouse and at the "The third year party".I then became involved in the first and second W&W.
During the weekends of the (cold) winter of 2011-2012, I was spontaneously invited to Vincent’s garage. Florent arrived at the same time, with the project of reviving his father’s old Norton : I got involved with the project with Vincent, the thinker, and Florent, a novice like myself: both of us in the role of those carrying out the orders. Slowly, I became familiar with this type of mechanics and despite some periods of inactivity, I made progress. Certainly if Vincent hadn’t put his ideas, his knowledge and his garage at my disposal, I would never have thought to have thrown myself in to the project of acquiring the Norton.

I had bought my 1974 Norton HiRider 850cc a year and a half earlier from  a French importer of English motorcycles destined for the American market. For him this bike, an order that never came off, was incongruous in his stable of flamboyantly new bikes: it was my holy grail.
I came back from a trip in the USA and despite its numerous stylistic faults, this English bike reeked of California!
This Norton came from Baxter Motorcycles in Iowa. Its historical importance was slight, but the style is irreprochable… the previous owner had the ideas, but not the means. I nicknamed him ‘the butcher of Iowa ‘Mechanically the bike was not functional, the front tyre was from a car, the sissy bar was looked like it had been forged by teeth. Mechanically everything had to be redone: Having been thrown in at the deep end I had to develop from a novice into a quasi-expert in Norton Commmandos


Like so many others I would go off driving, break down, repair the problem, find another…. During one and a half years our relationship was up and down: full of joys and despair, numerous frustrations, desire to abandon the project, then start it again. During this time I would visit the Southsiders garage, where I witnessed several other exciting projects: the beautiful realisation of Florent’s Café Racer, the preparation of Vincent’s Triton for Bonneville 2012, the finishing touches for the electrics and last details on the Bobber Triumph of Christophe Canitrot …I realise today that it was that period, so rich in apprenticeships: (mechanics,design, forging, electrics, painting, etc), which pushed me to make my Norton project so much better, and to have such an ambitious goal. Compare a stock version of the HiRider to that which I have accomplished, and you'll see how far I have gone.
Nothing has been  delegated to a subcontractor: everything that has been done on this motorbike, has been done in the garage, and I think I can say that everyone who has set foot in there has particiapated to some extent in the project. Corey Wyatt, who speeded up the process, thanks to his skill and speed at welding and Chaudonnerie;  Frédéric Antoine,, for his talents as a blacksmith; Marcel Galinié, the goldsmith/ mechanic,whose milling and lathework, made a big difference onthe bike, Thierry De Miras for his unerring ear which can detect potentially expensive suspicious noises ,Henry Martinez, for his generous inventory of readily available parts; Benoit Guerry for the quality of his photos, and for sharing each disappointment. Vincent Prat, for time spent in the garage discussing things together, thinking about all possible angles by which to advance the project. And for the final touch, Jerome Gone, who brilliantly adjusted the cable throttle!

Today, it's just pleasure. The bike reacts perfectly to me. The engine runs like clockwork, and its handling on the road lives up to all its promises, with the added bonus of watts à gogo as it accelerates. Several days ago  the guys at Southsiders all took to the road on it in turn and as I saw their collective unanimous smile I said to myself that the project is validated.... ! 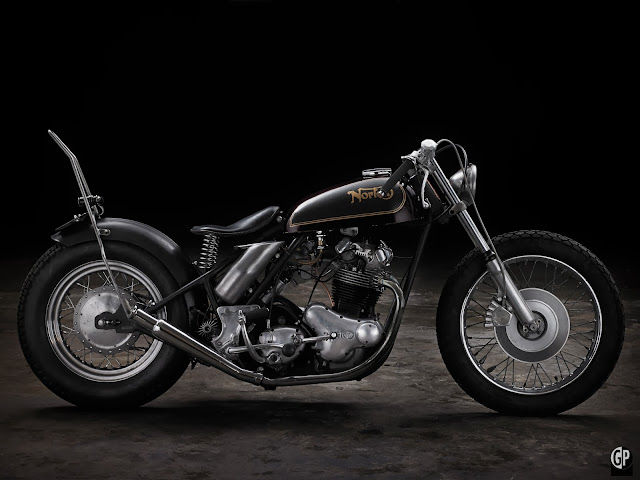 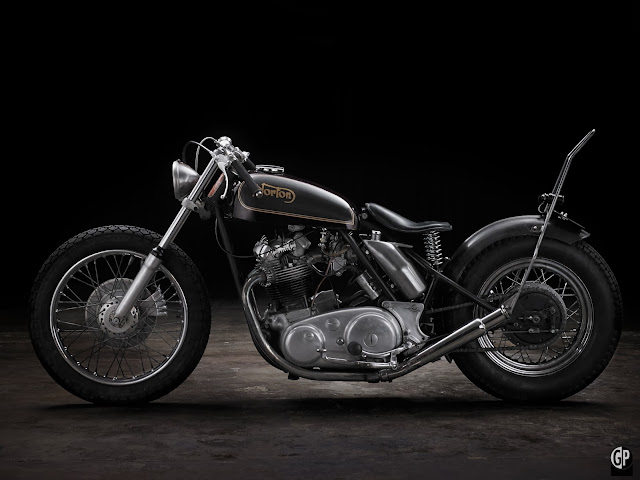 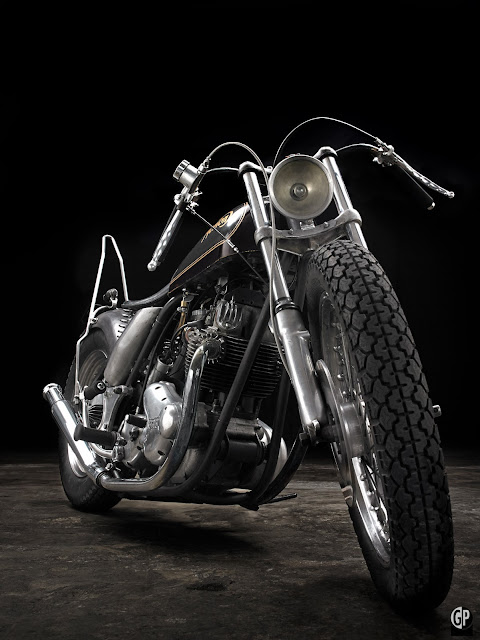 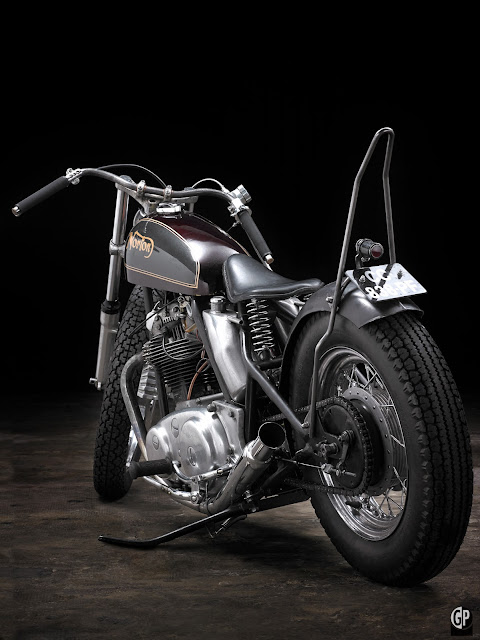 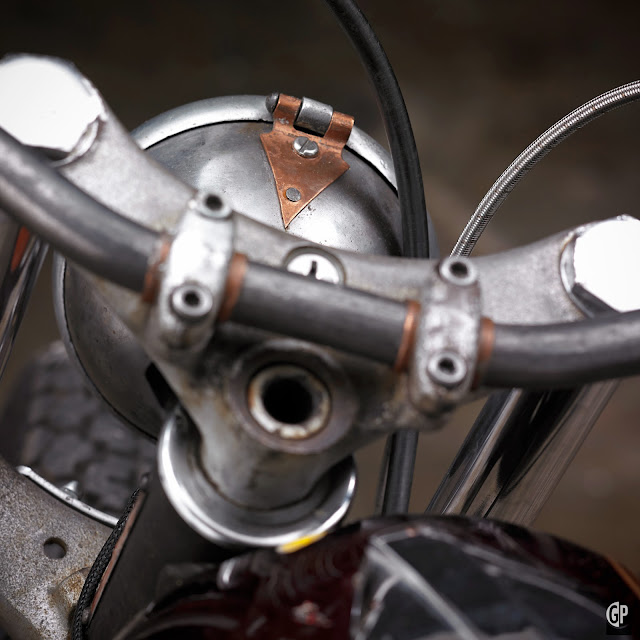 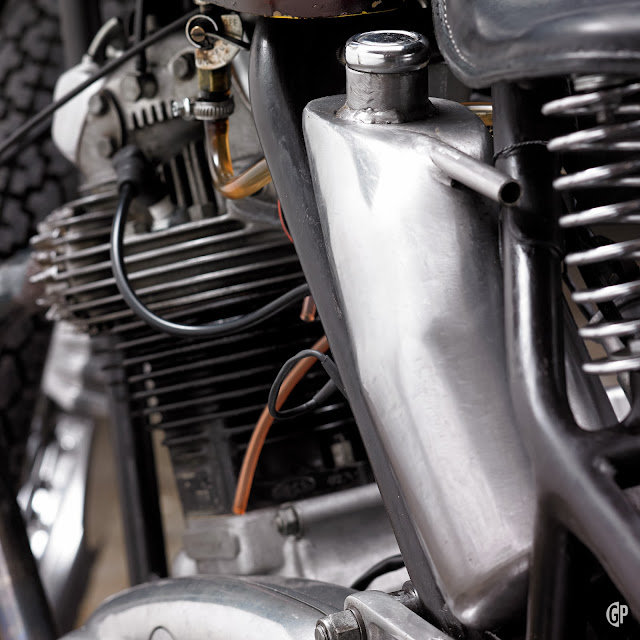 Not one but two oil tanks built from stolen urban furniture 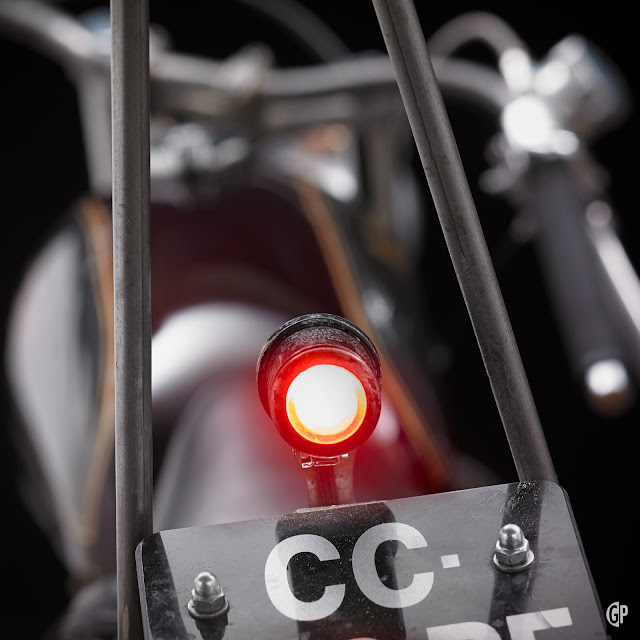 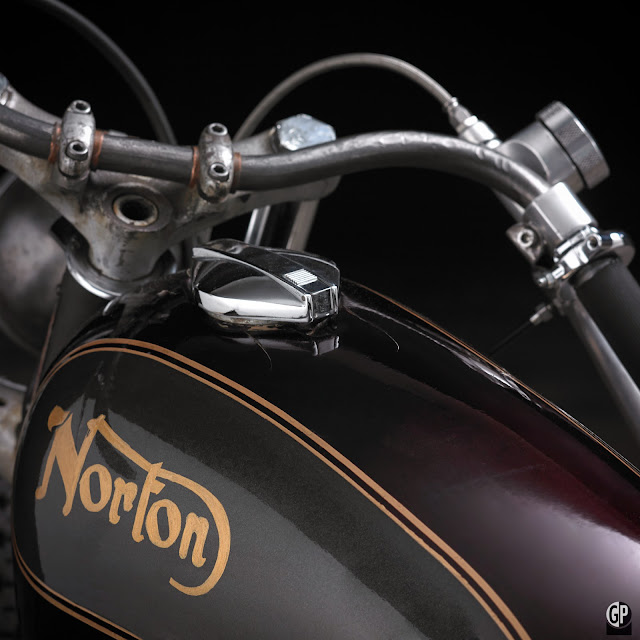 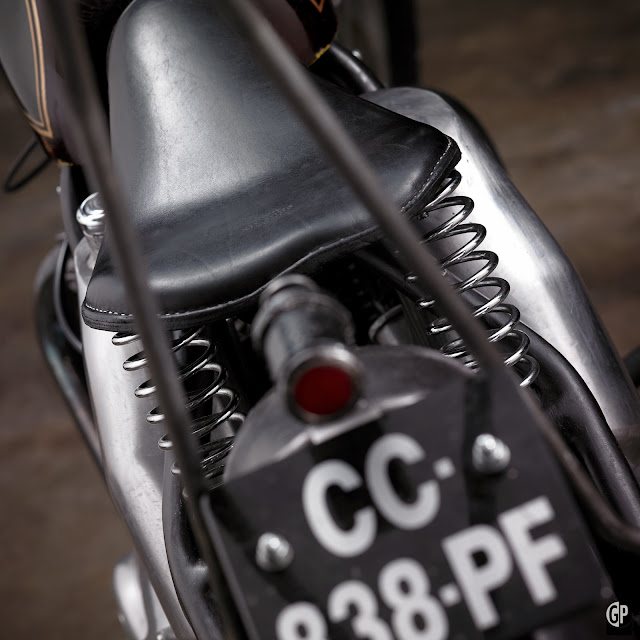 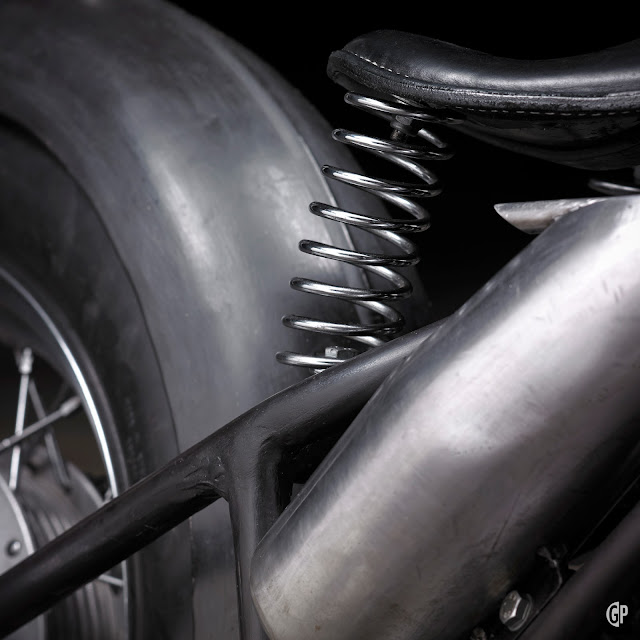 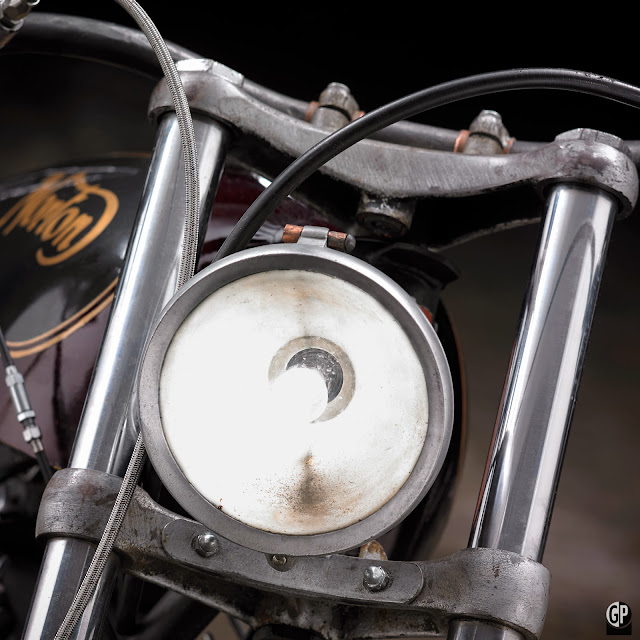 That Cibié Headlamp comes from the 30's thanks to JCBarrois 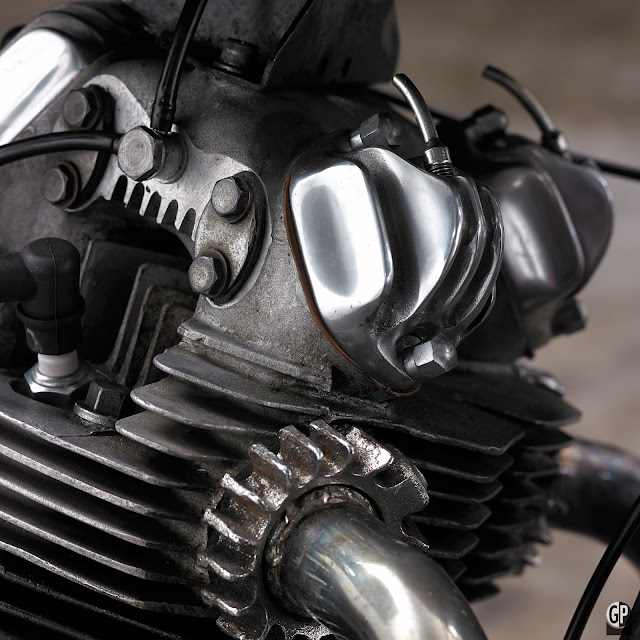 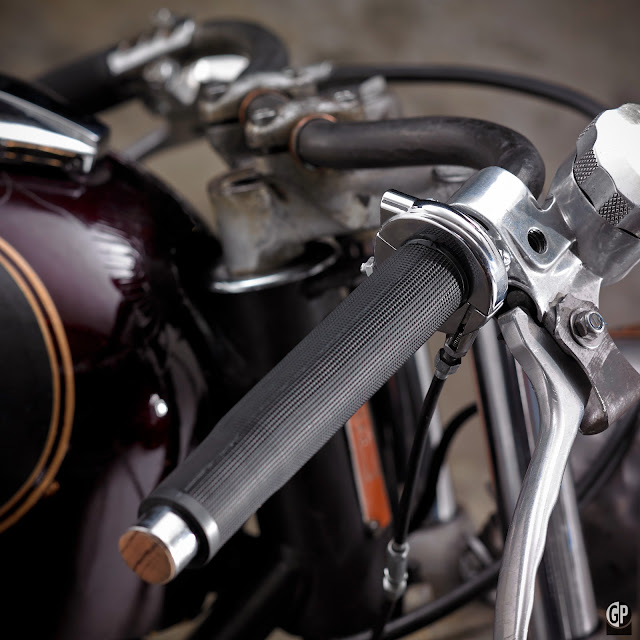 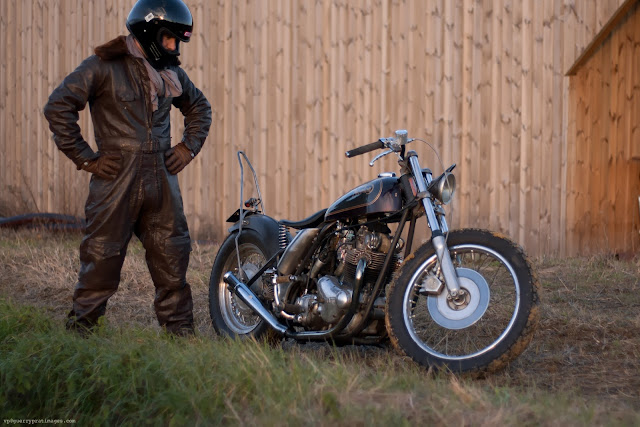 Shall we remove that front brake Julien? 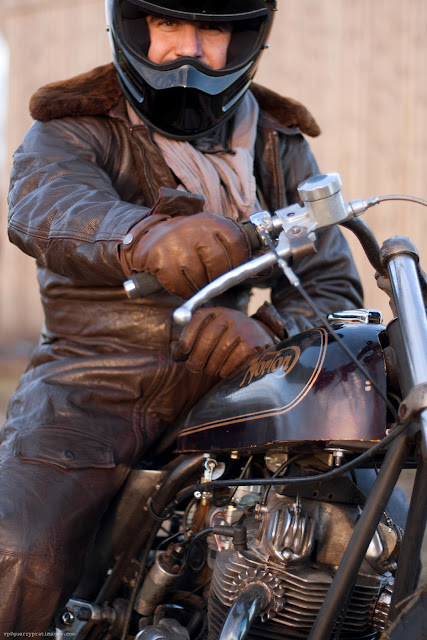 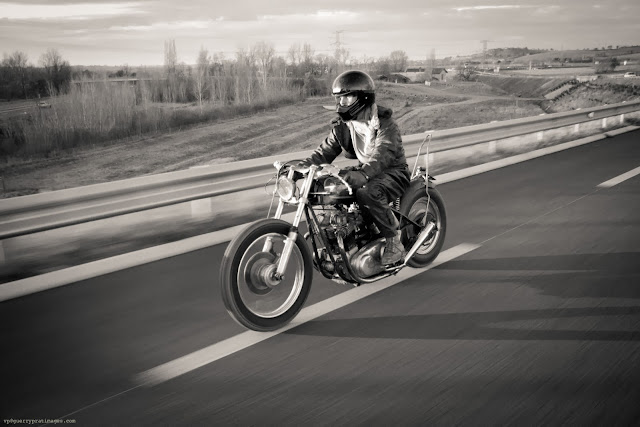 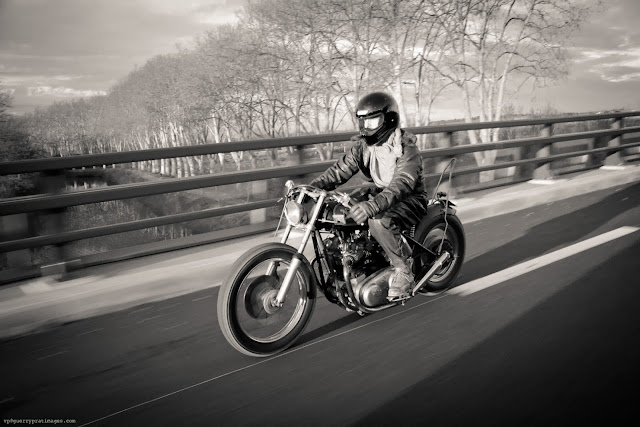 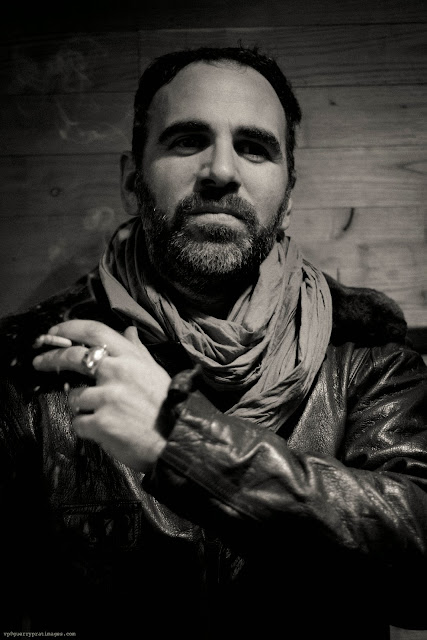 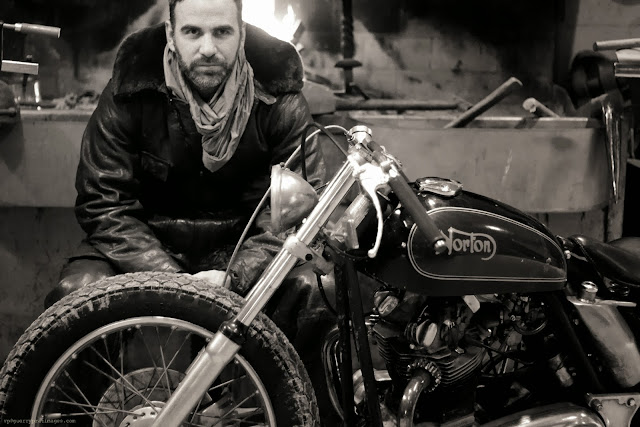 Back to the forge, where the bike was born. 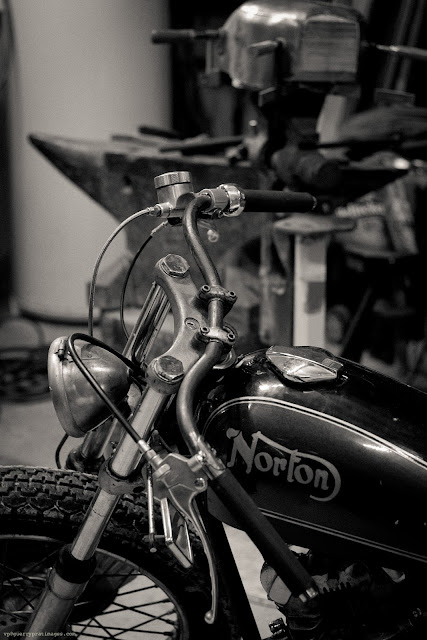