Sylvain Berneron: a man and the machines.

Sylvain Berneron aged 24, is a talented french motorcycle designer, working for a German company. He is also a pilot, the tracks and the dust have no secrets for him. He works for the future but also love the past and motorcycles history . We met him in Toulouse last June for a photoshoot just before going together at W&W.

Suzuki TZAR:
Being a motorcycle freak, how can it get better than building your own custom bike ?
But before getting my hands dirty, I had to figure out what i exactly wanted:
- A good steel frame for the stifness, but it also had to run under the tank and not be perimetric to get a more classic look.
- An oil-cooled engine because it is simple and reliable.
- A big bore inline 4 cylinders to get decent torque and power.
- Twin shocks for its beauty.
- and all of it in a "modern" base to be ridden everyday.

After a quick research, only two bikes were fitting the bill, The Kawi ZRX 1200 and the Suz 1200 Inazuma. I went for the Suz simply because the tank looked better to me.
I bought the donor a few weeks later and started to teer it apart, at that point I was very sceptical, the stock bike was miles away from what I had in mind...
This bike is a light custom, the goal was to get the maximal impact with a tight budget so it was all about updating the chassis in some areas and reworking the all tail to get a proper cafe-racer fly line.
I have been working on all my bikes maintaining them for years, but I didn't have the skills to do this, luckly my best friend (Hugo Lambert) is a race mechanic and took care of the proper custom face.
We started to swap the front end for a 2006 GSXR 1000 fork and brakes, combined with LSL clip-ons, an ACEWELL speedo and a pair BRAKING PR19 master cylinders.
The subframe has been shorten by 30 cms and totally rework to place the battery and the CPU under the seat.
The engine received K&N filters, bigger exhaust pipes with a ZARD silencer, a modifies ignition finger and a pair of YOSHIMURA camshafts that brought the torque up to 13,5 Mkg and the power to 160 Hp.
Finally a lot of parts have been black powder coated and we finished it all with a Barry Sheene's 1975 RG500 replica paint job. 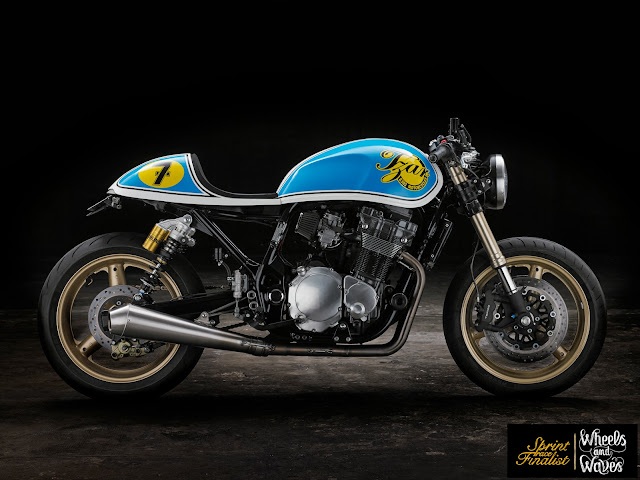 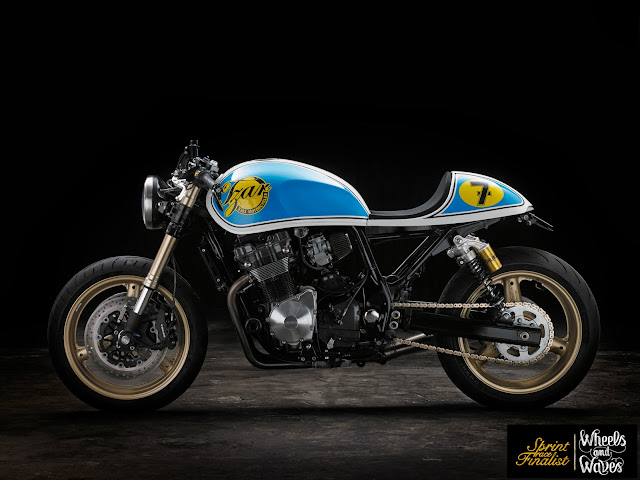 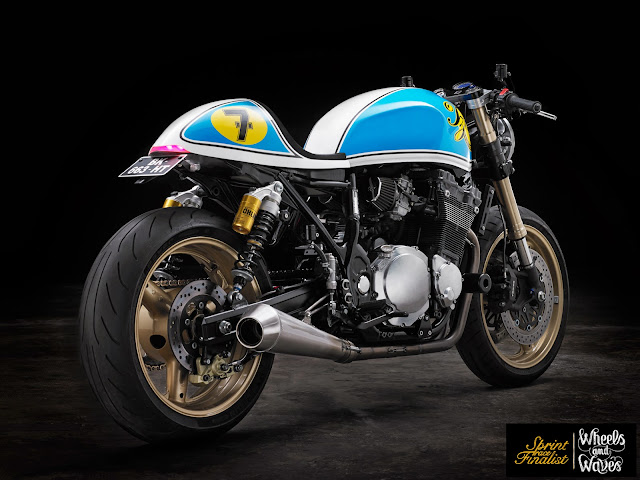 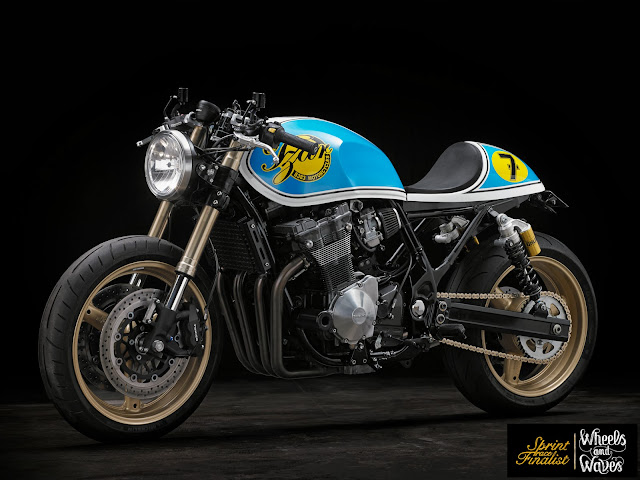 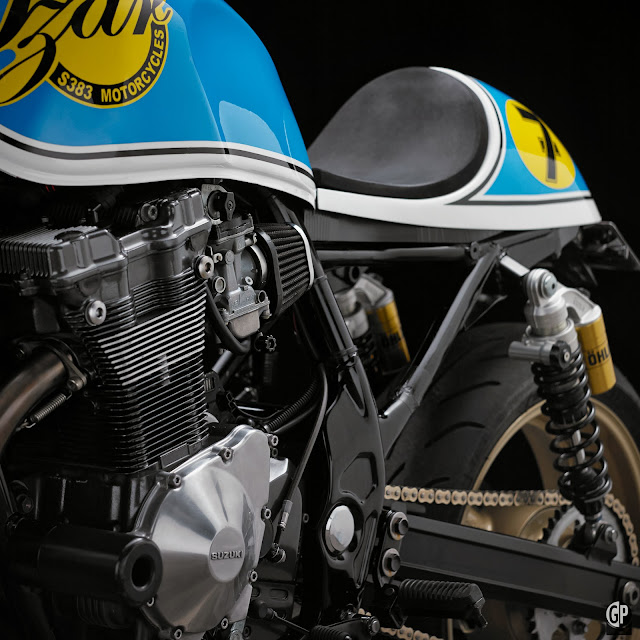 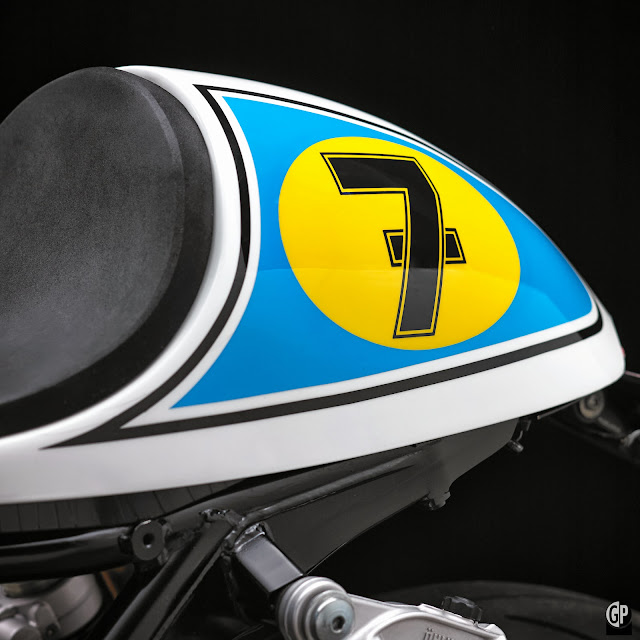 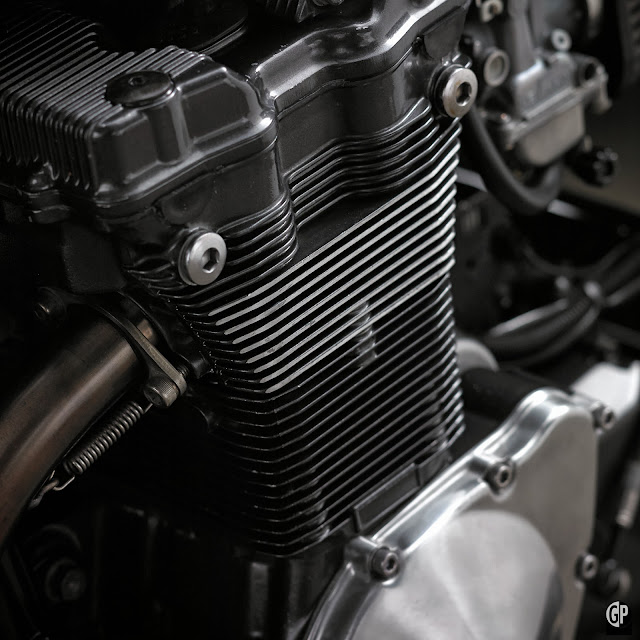 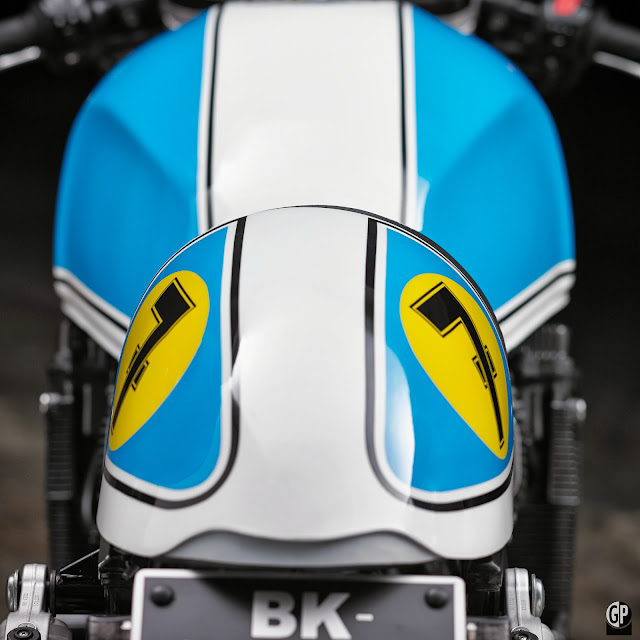 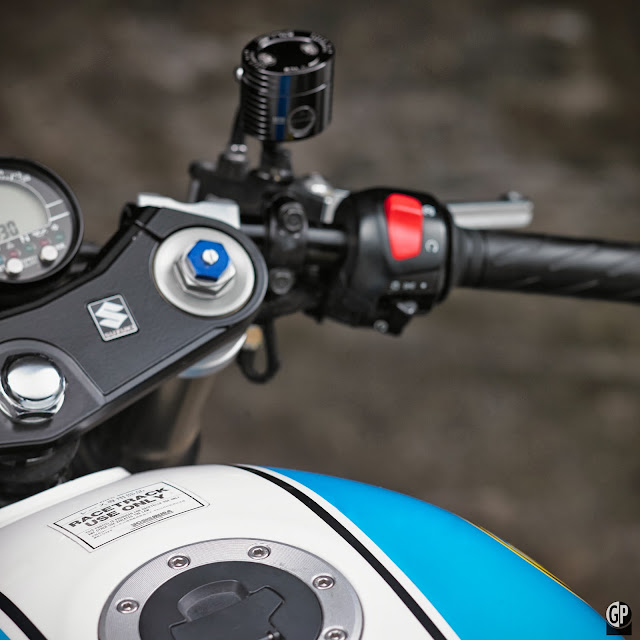 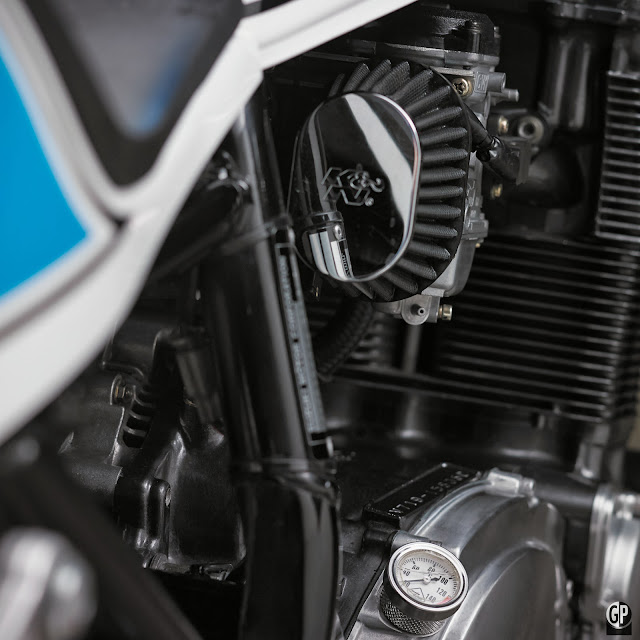 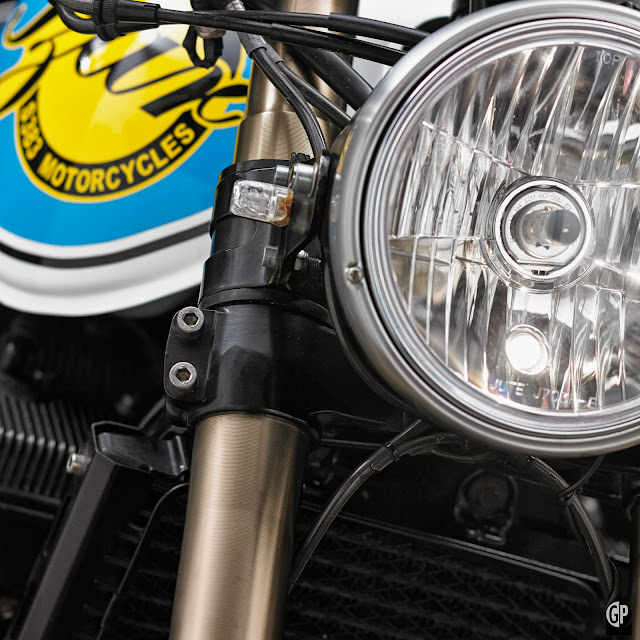 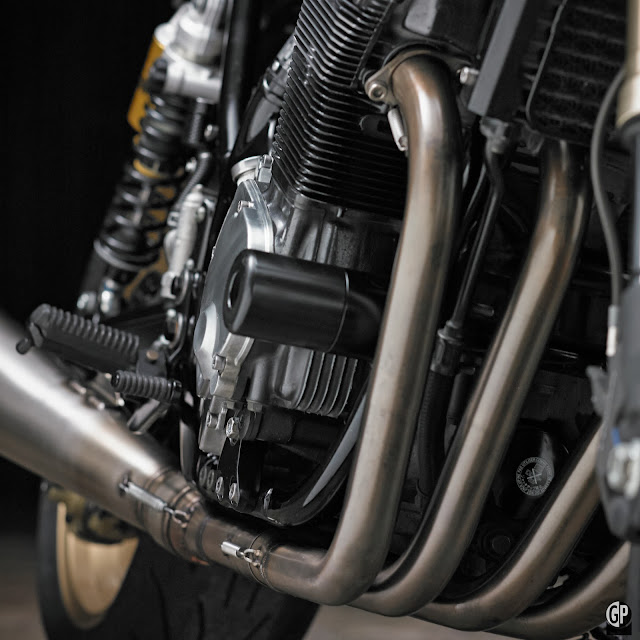 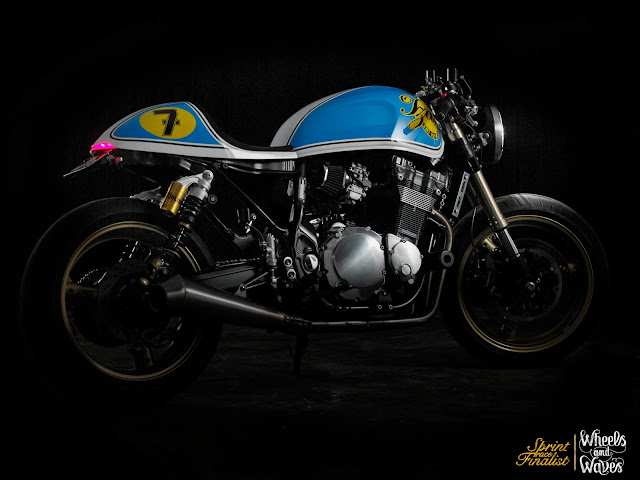 Holographic Hammer:
Building a custom bike takes a lot of time and money, as a designer i realized that the first idea is rarely the best, perfection comes with exploring different options and trying unusual things. All my friends ride or work in the custom motorcycle business and I was always around them to quickly photoshop their garage builds, and make them so logos.
That is the all meaning of Holographic Hammer, a digital tool helping and simplifying the manual labour.
I am convinced that doing a sketch before building helps to get the global proportion right and stay on track while doing it, because you can easily get lost redoing the same part again and again until it works.
It doesn't matter if the bike is gonna be built or if it's just about making a cool picture, I am always having fun drawing custom bikes for friends, and that is how I ended up sketching for El Solitario MC, Untitled Motorcycles, Fuel Bespoke, Icon 1000, The lucky cat garage and Derestricted.
You would like to visualize your dream custom bike or simply see some cool shit? Make sure you check Holographic Hammer on Facebook  and I will be very happy to to sketch it up for you ! 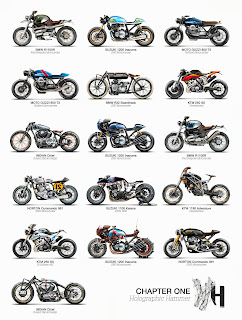 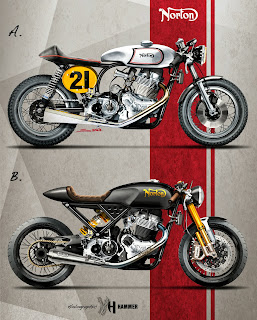 Erdengast Project:
For my diploma thesis I wanted to work on the "After petroleum motorcycle era", because according to specialists, our petrol reserve should be gone in 40years.
But, as guys I love my petrol engine because it smells, it vibrates and it has soul so I am not ready to swith at all.
And an electric bike that replicates an actual package and simply swap the power source is not very attractive yet, to me at least.
Now what if Electricity was actually the key to lead us to a new generation of bikes, offering innovations you never had before on any other bike, is that something you could be interested in ?

Well the Erdengast project is trying to show the amazing potential of using an alternative energy for motorcycles.
This concept has:
- a 2x2x2 architecture which means both wheels turn and are powered.
- Wheels that integrate E-motors, brakes and suspensions all together, power/brake hub units and the Michelin Tweel technology for the suspension in the tyres walls.
- A variable geometry, the seat actually moves around the main chassis, imagine an intelligent bike teaching the body where to go to improve weight distribution.
- The small side panels on the side open while braking, helping the bike to slow down by increasing the wind resistance,  not by much, but it is still valuable for high speed braking on a race bike.

I wrote a book on this problematic, my conclusion was:
The motorcycle industry and fans will have to switch to alternative energies to survive and the motorcycles need that change to write an new innovation chapter on the motorcycle history book.
It will happen either if we want it or not and it is actually good because we (riders) are in love with petrol so much that we will never be able to see and understand the amazing potential that other power sources have to offer. 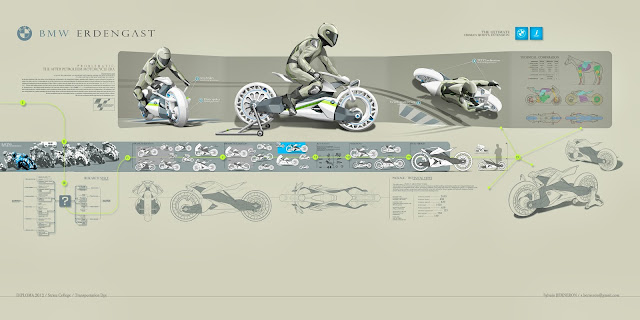 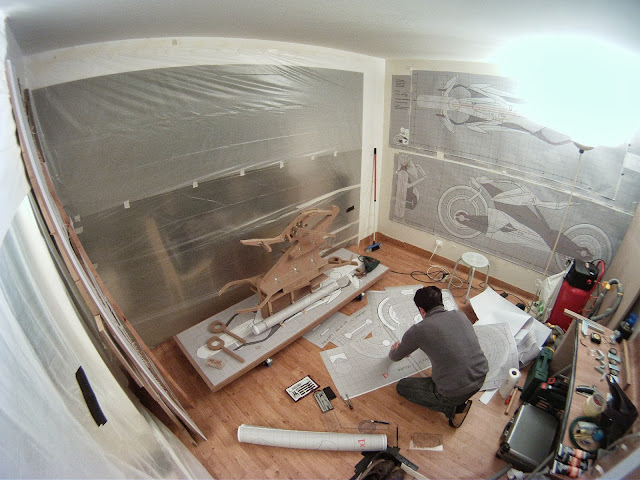 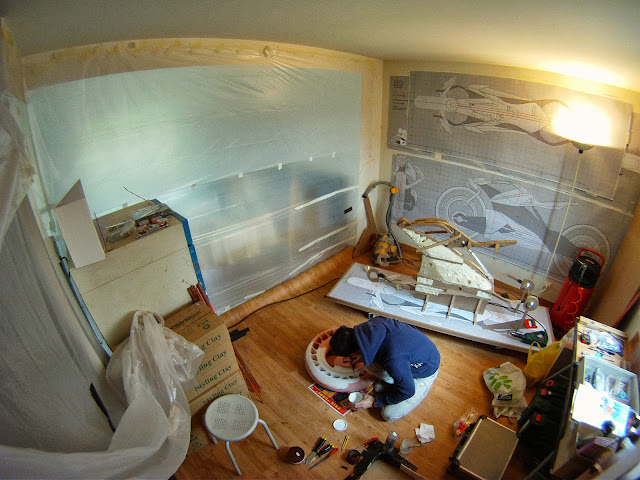 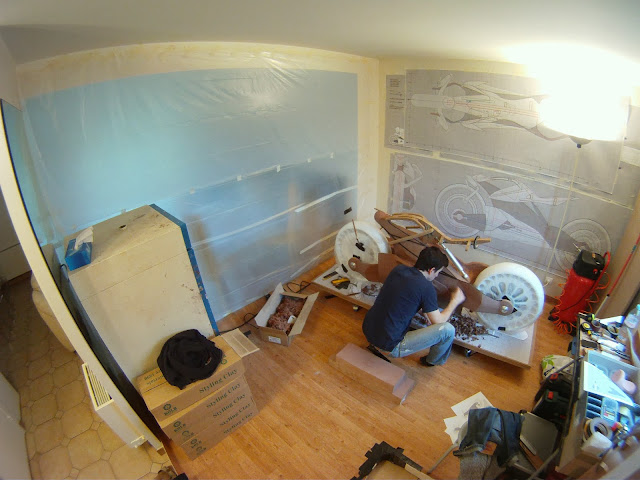 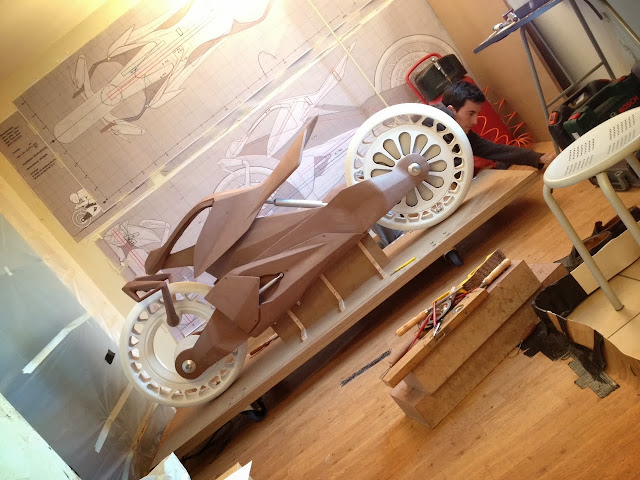 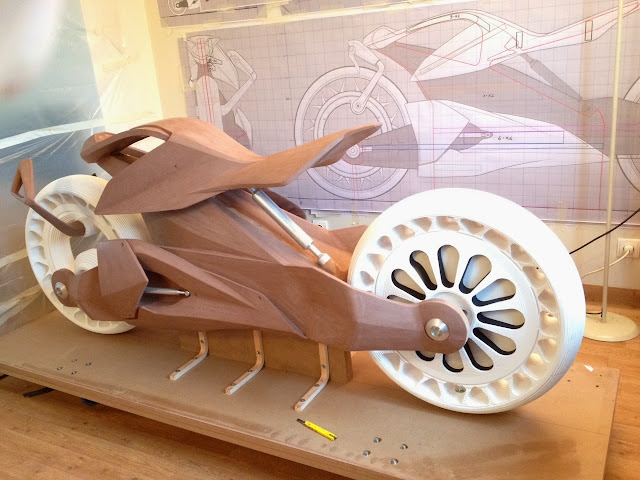 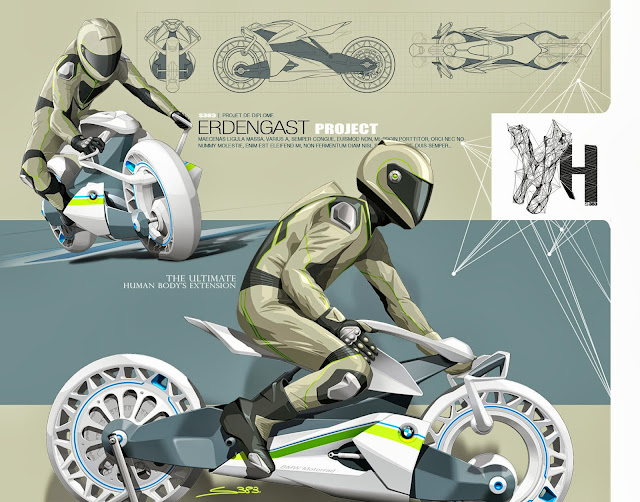