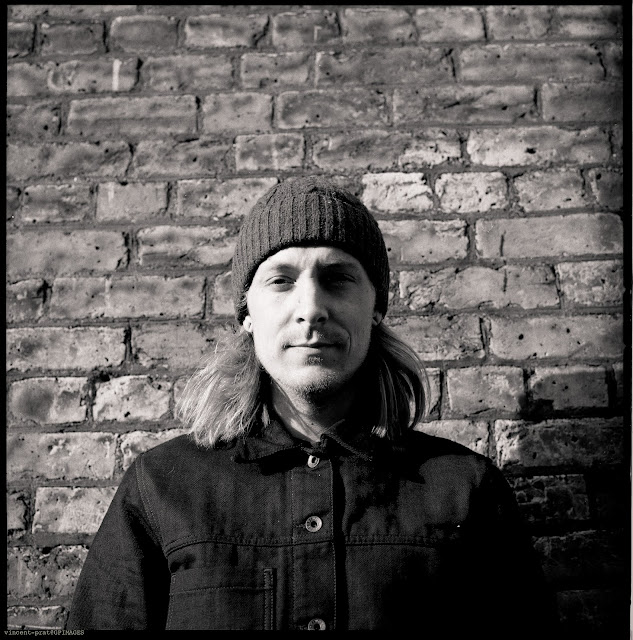 For some, the custom bike scene has been stuck in a rut, but times are changing and a new direction is being taken. For several years we have experienced an acceleration of this phenomenom, mainly as a result of the internet and social media. Nicolai Sclater is a strong character on this new scene, he brings his own unique style and is revolutionising custom painting. 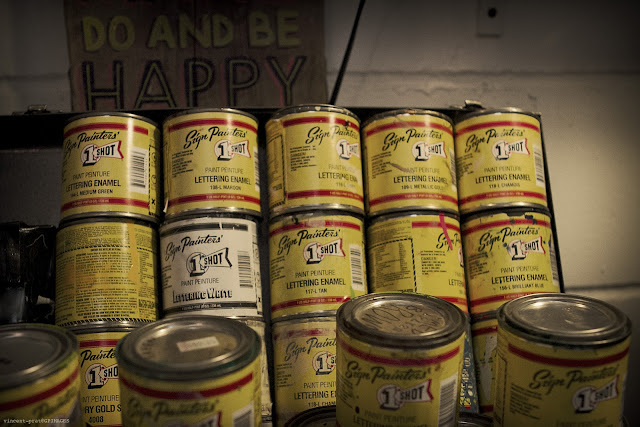 Nico lives in Hackney Wick in East London, where he has set up his workshop in an old dark brick warehouse (formally The infamous peanut factory) which he shares with Steph, his partner, and where she has her hairdressing salon « Parlour Macabre ». This workshop is also where they live : as London rents are  prohibitively high they have created a suspended mezzanine to serve as  their bedroom. Everything is organised and impeccably tidy, despite Steph's clients who come one after the other all through the day. The room is dominated by signs and panels painted by Nico aka "Ornamental Conifer". That's the scene set. 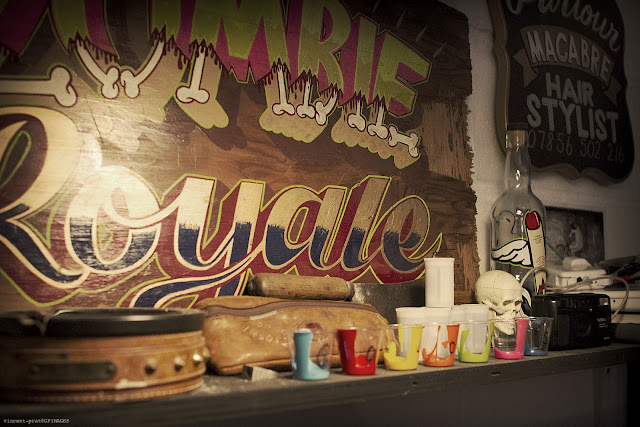 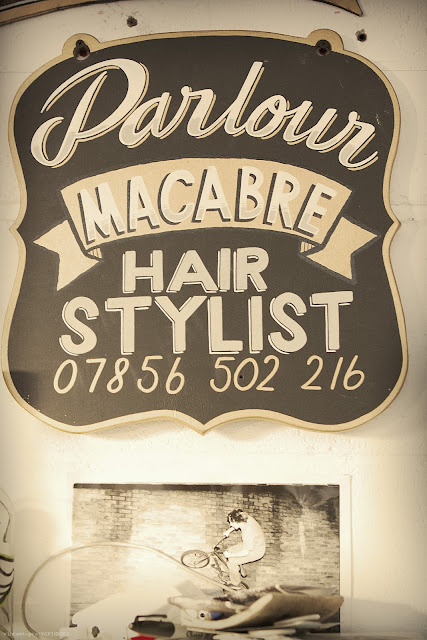 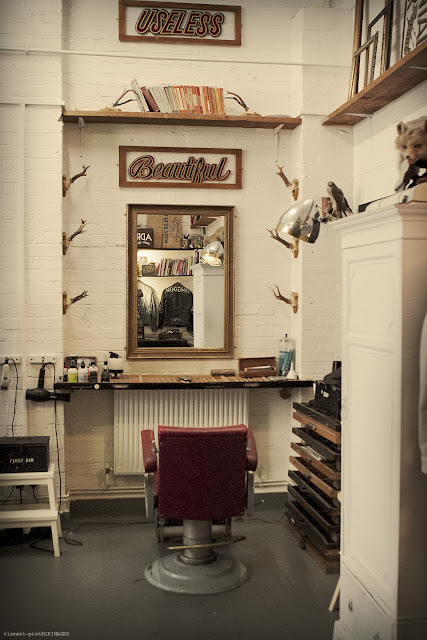 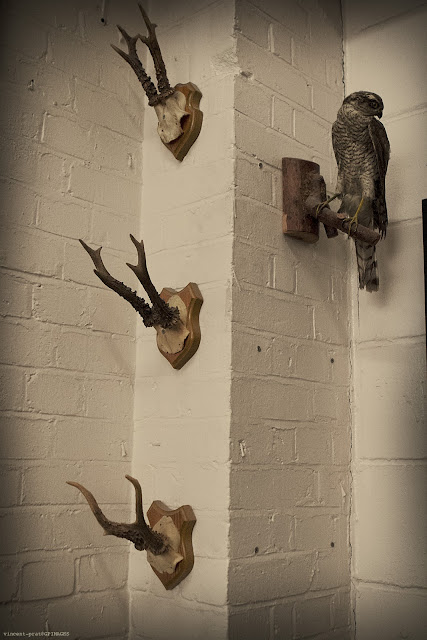 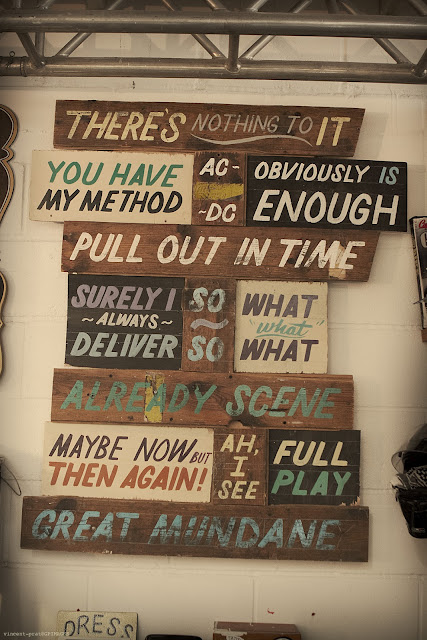 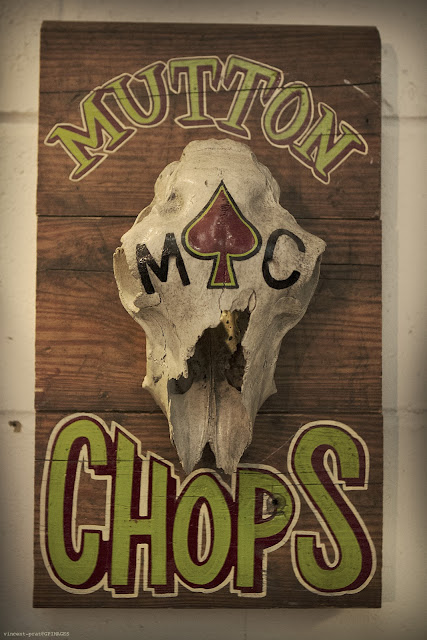 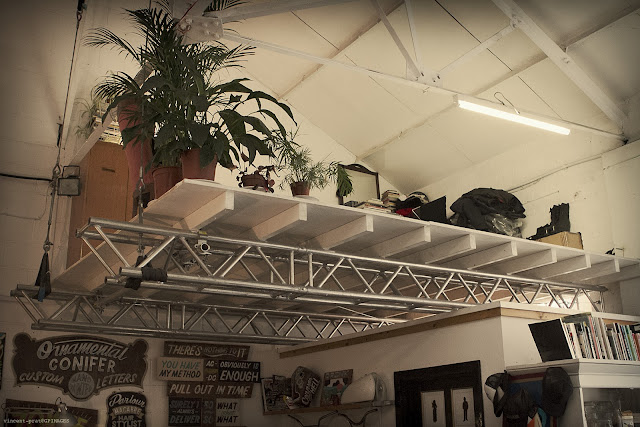 As we should, we drink tea ; Mark asks the questions and I take the photos.

Recently Nico has been very successful, and today he is very sought after and a leader in this field. He explained to us that they both want to leave London next year, after 10 years. Their clients expect a certain sort of work from them and they want to avoid being typecast and to regain their creativity. Despite his youth he has realised the pitfalls of the system and has made the spontaneous decision to stop his commercial work in favour of artistic inspiration. Fuck money ! 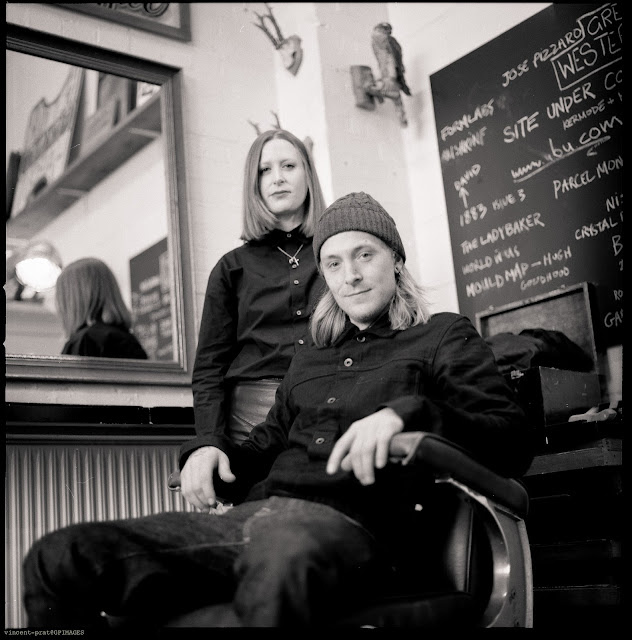 Furthermore they want to have children in a while, some 'mini-conifers' and they don't want to educate them in England . Sweden seems the ideal place to them because of the quality of their education system. Nico has roots in Scandinavia, more precisely in Norway, where his father comes from, but Norway is too expensive to live there . London is a city which attracts people, but often they don't stay.

So he and Steph, his partner and best friend, are going to travel for a year, leaving motorbikes behind them. Moreover he doesn't want to be associated with motorbike gangs : people will soon get fed up with this revival which is currently so strong. 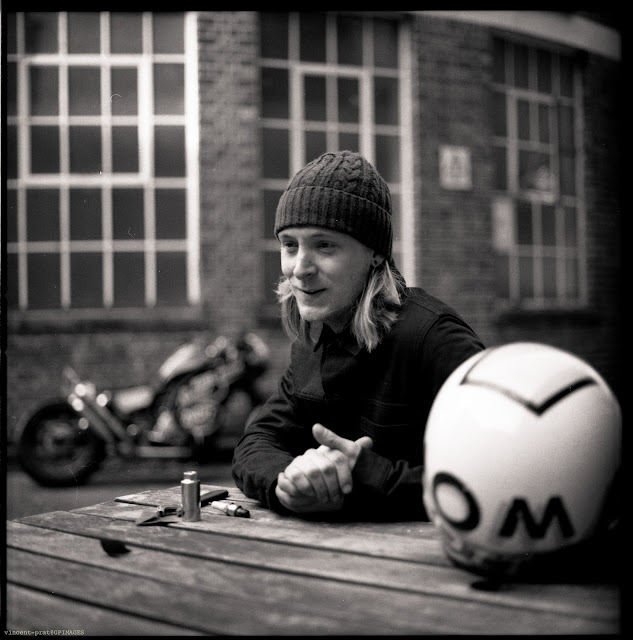 “ You know”, he tells me, talking about creativity, “ we are all searching for  our way, no one knows their way : do you know yours? It's something that my parents taught me when I was very young, especially when I was lost or misunderstood, you have to stay awake and excited by what we see and experience. I don't want a predictable life. Finally, recently I had to go abroad for work and I realised that I usually work in my studio, surrounded by all the influences that seemed to me indispensable for visual stimulus, and then suddenly, in this big empty, white building it is very different, a new page turns, and everything was coming from inside my head : fresh and productive. I realised that I don't need a studio, I can work anywhere, I am free....

We went outside to see the motorbikes and to continue the discussion while Steph had a client. Under a tarpaulin he unveiled a SR500 version Flat tracker, without any trim, just minimal, called 'the curlew' , because it doesn't have any lights. He derides the fact that all his friends thought that he'd have a super-customised bike, and with this one he thumbs his nose at them. 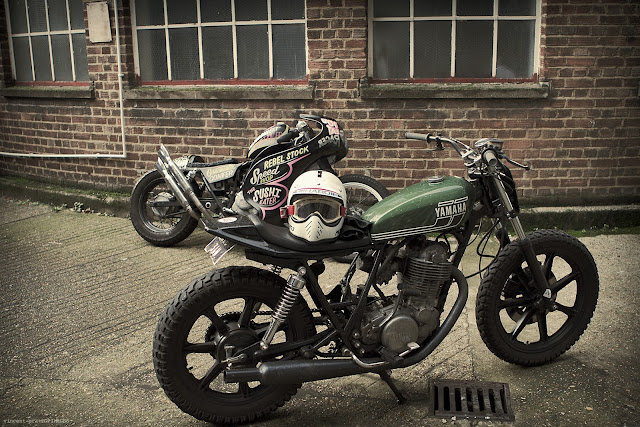 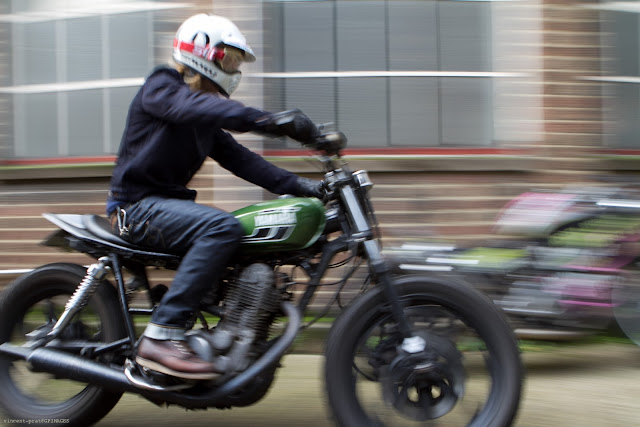 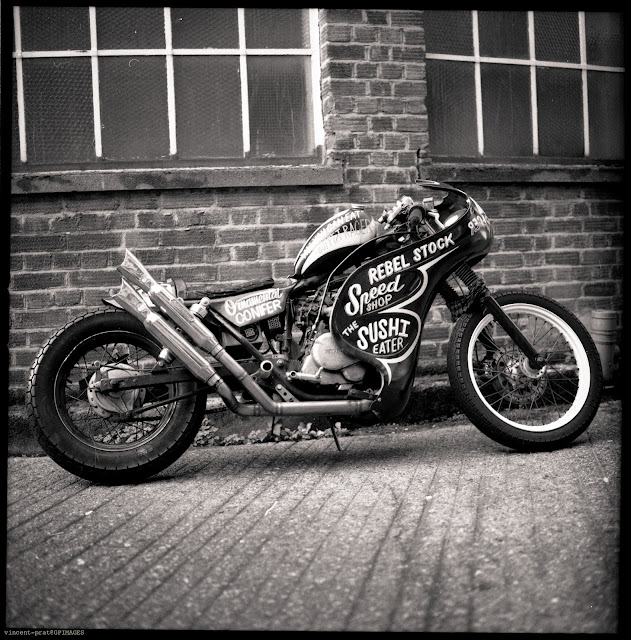 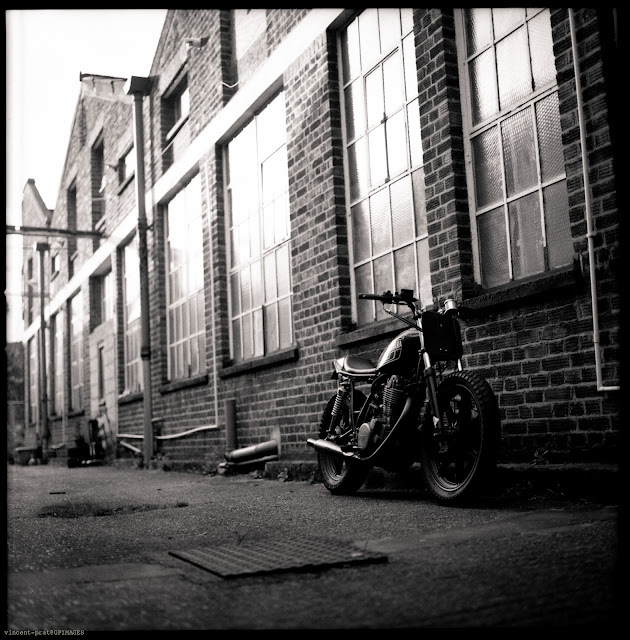 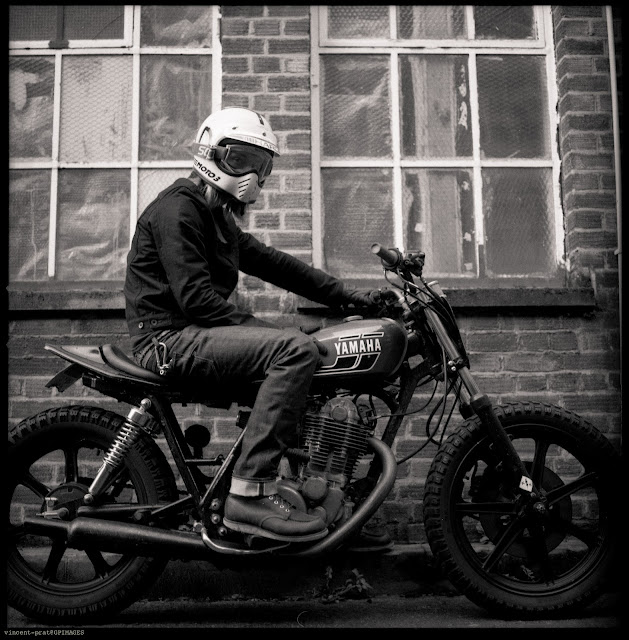 From the second tarpaulin he brings out his famous 'Sushi Eater', this little bike is a Honda Rebel, which has Japanese Bosozoku styling influences. Nico explains that many Japanese customisers build single cylinder bikes from undesirable/ unfashionable bases into unimaginable machines. The exhausts have vertical silencers  and the fairing is set high. They are often described as American choppers married to an old style café racer He explains to us that all the parts had been donated to him unasked by friends, and as if by magic the motorbike made itself. Original Honda Rebels are "disgusting" machines.
His other main influence was a picture of a Harley rigid with a full fairing which was in his father's garage . Nico grew up with this picture. 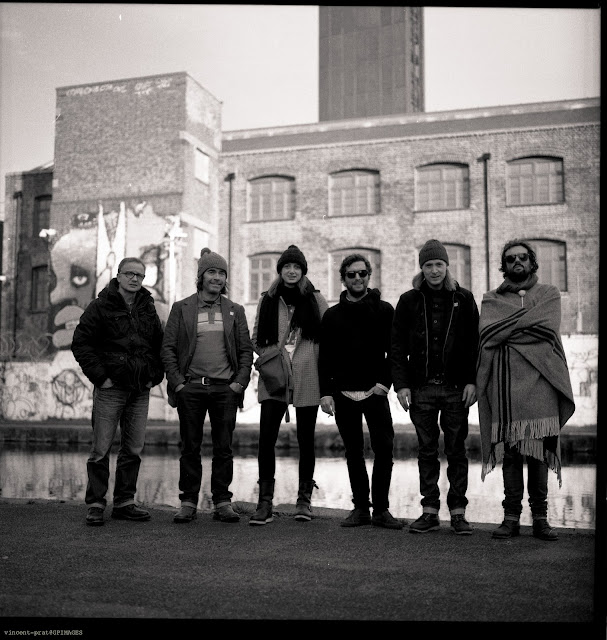 We finished the interview in the local pub, with the Bandidos crew in a post-industrial atmosphere. The beer was brewed on the premises and our tongues were loosened, but that's another story.