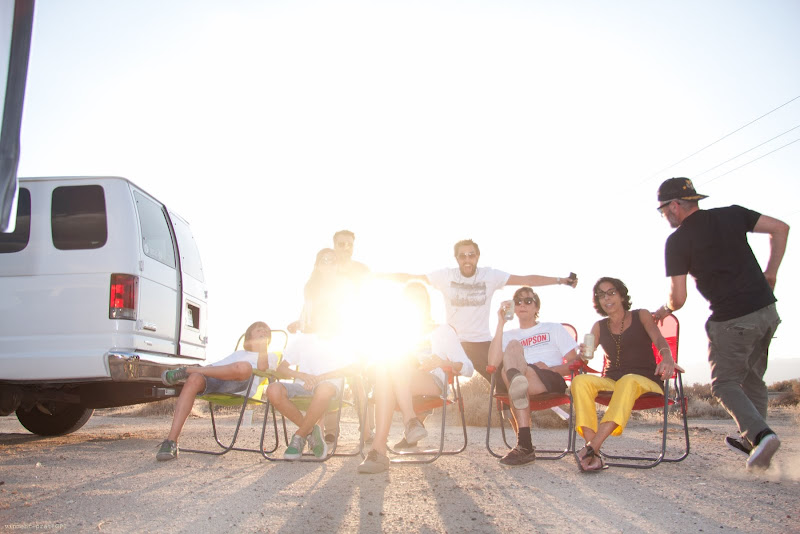 After several days in the big city, we were happy to get back on the road, with the motorbikes and all the equipment following behind the Vans. Traditionally, the participants of Speedweek take the most direct route through Las Vegas, to get to Wendover as quickly as possible. However we had decided to go through Death Valley. 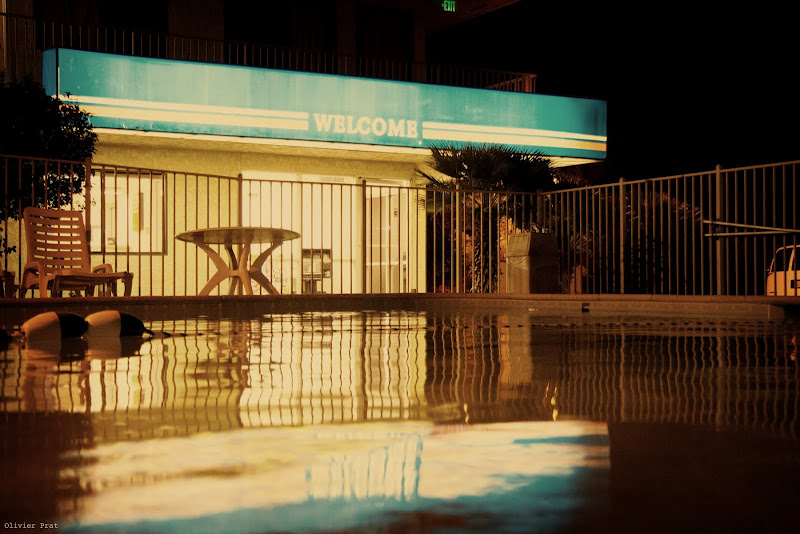 Our first stop was at Motel6 in Mojave, a small town where between the diesel trains with their characteristic sirens that come through continually and the military airbase there's not much opportunity for tourism, though it has a fine B-movie ambiance.  Here, already, the heat was stifling and a warning for the climate we were about to endure.... 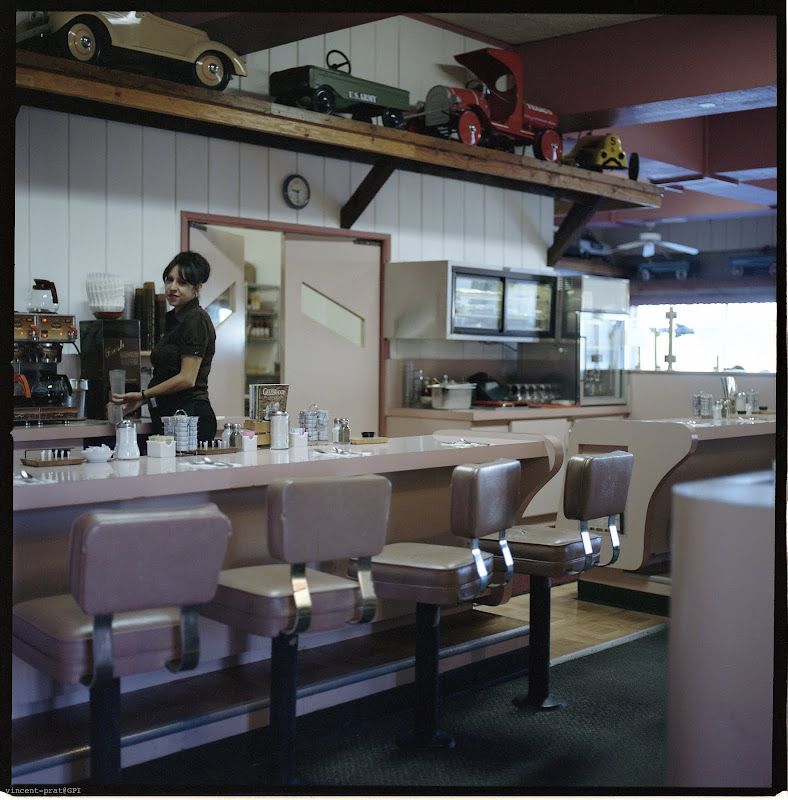 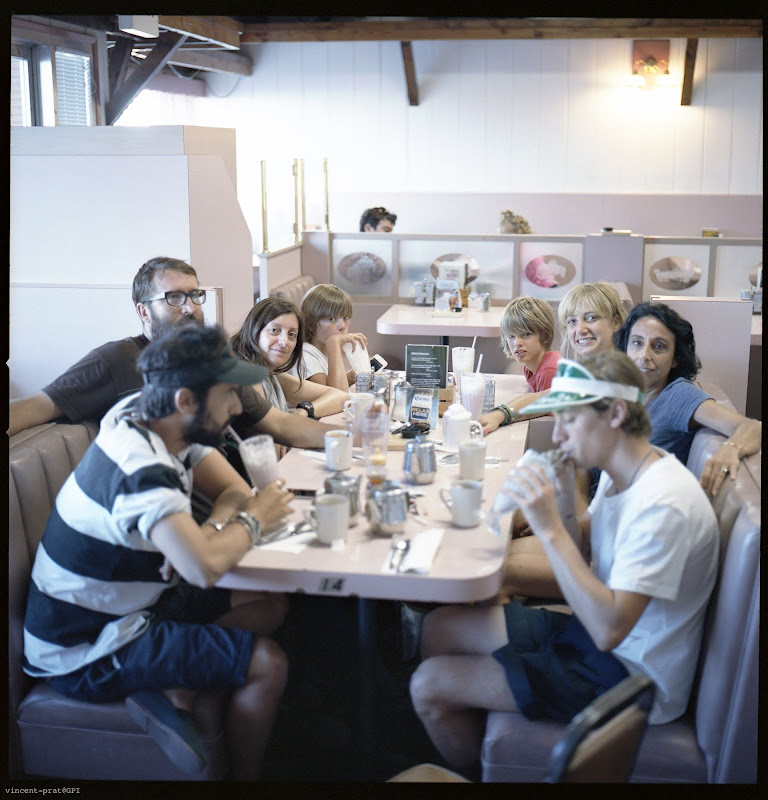 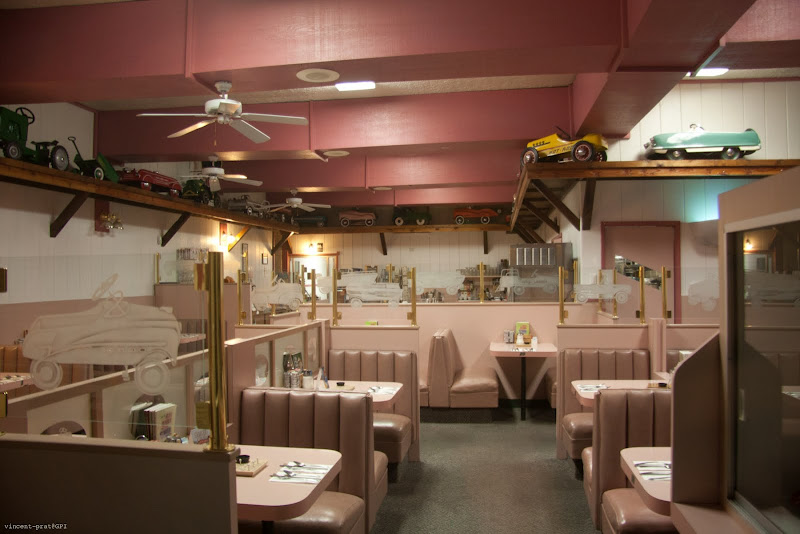 Death Valley is indeed a burning oven, and you cannot pause there. The lunar landscape is fantastic and despite the conditions there is some vegetation, and hence some life.... I have promised myself that I will go back there someday to explore it. 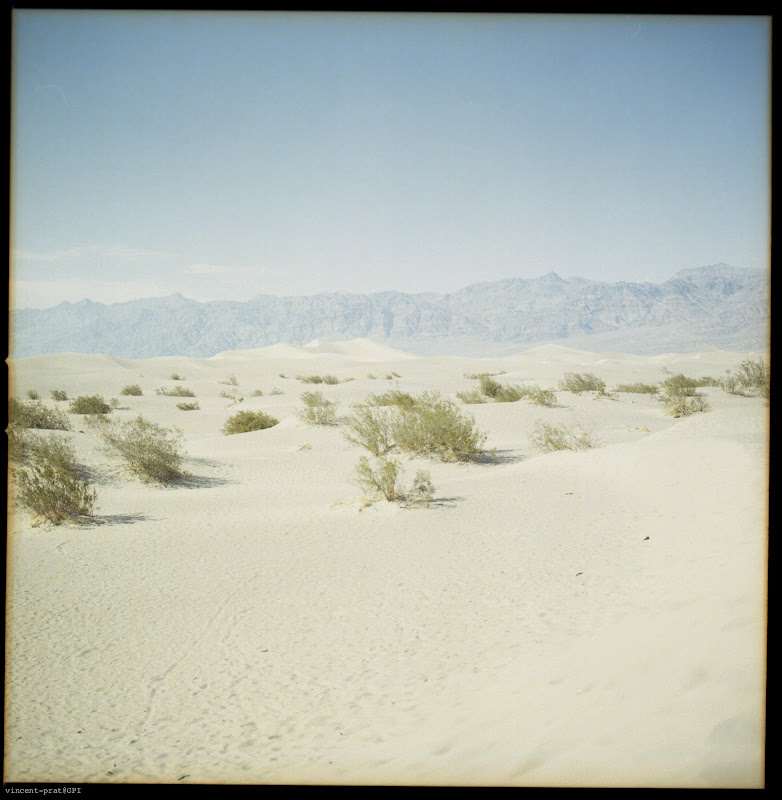 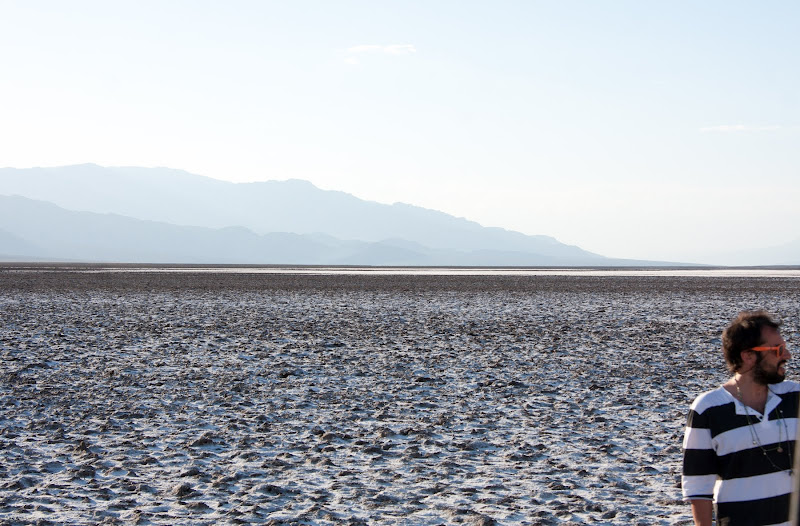 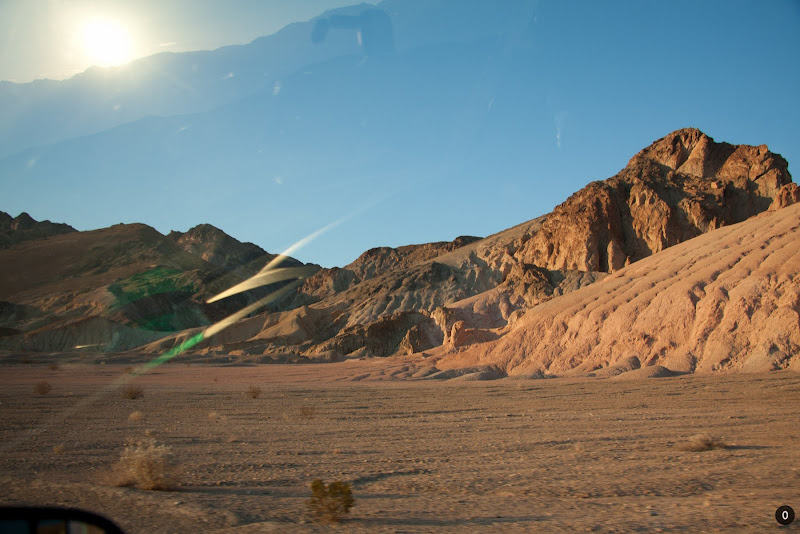 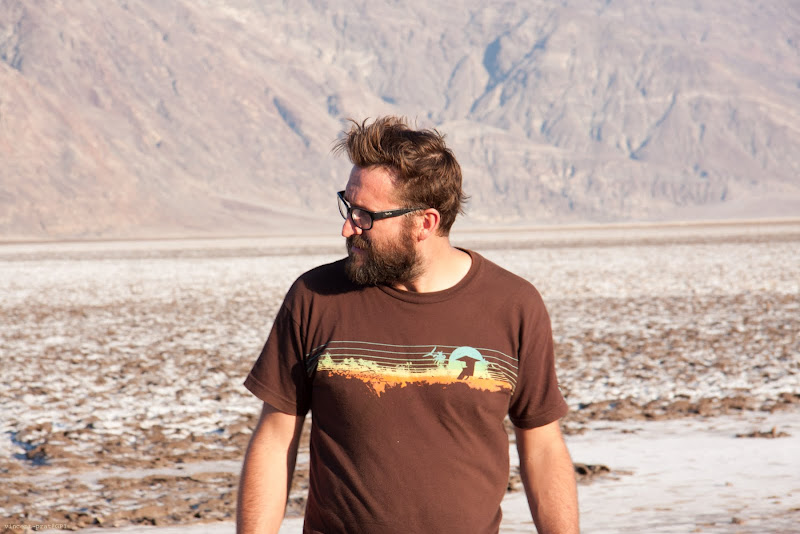 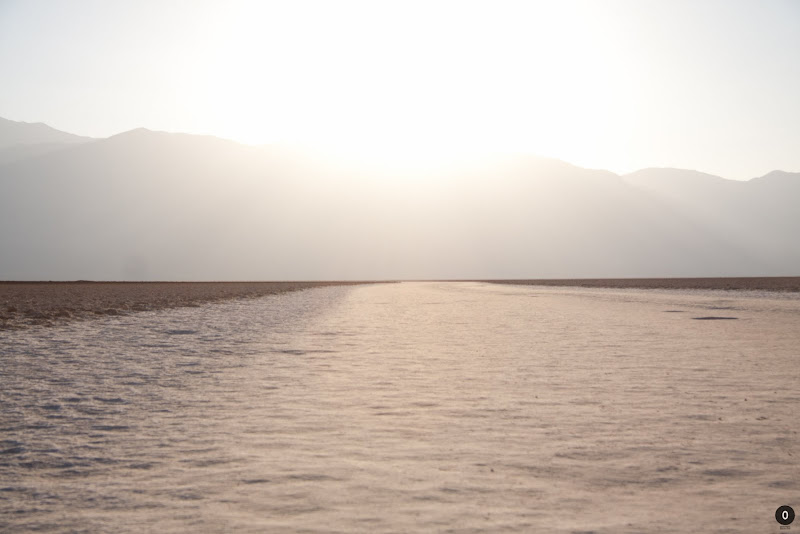 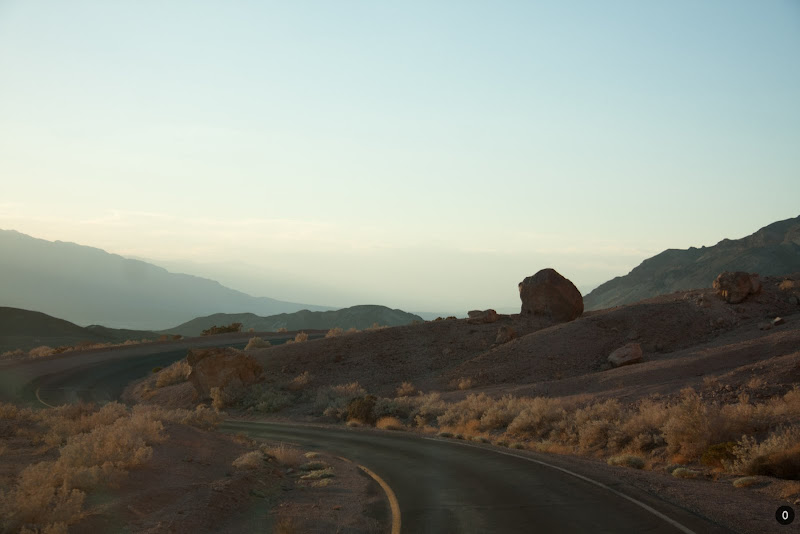 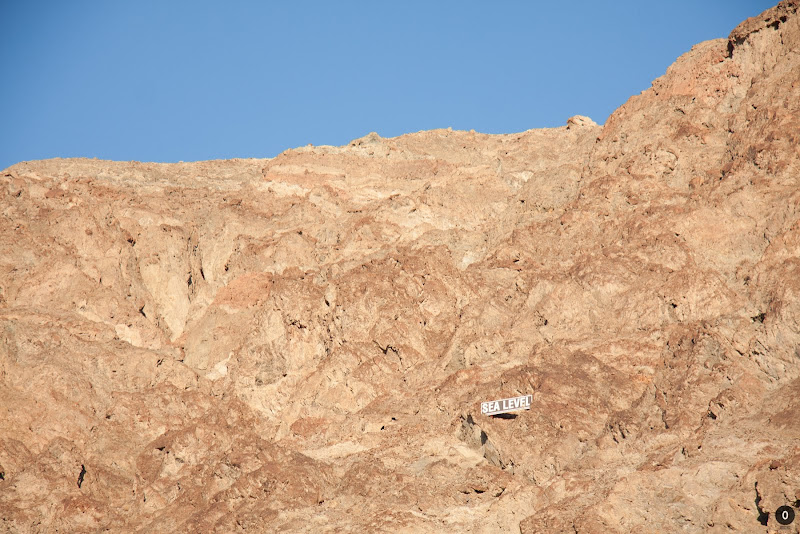 Death Valley is 283 feet under the sea level
We decided to carry on and find a more hospitable place to spend the night. Tonopah in Nevada was our overnight resting place. The hotel showed us some local colour: the ground floor was a casino, and I was astonished that there seemed to be always someone playing the damned machines all hours of the day and night. 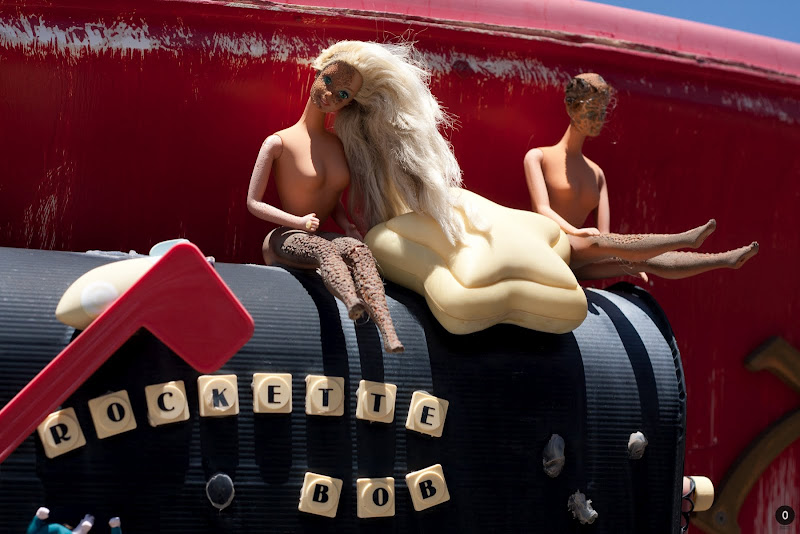 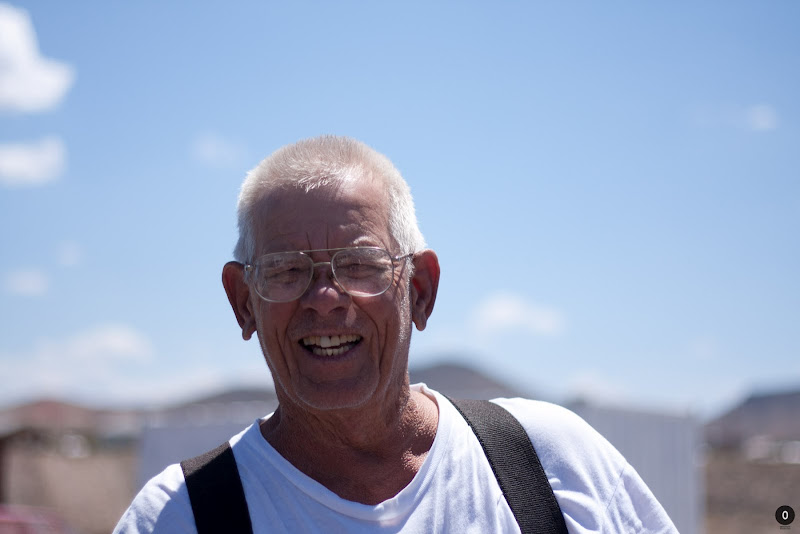 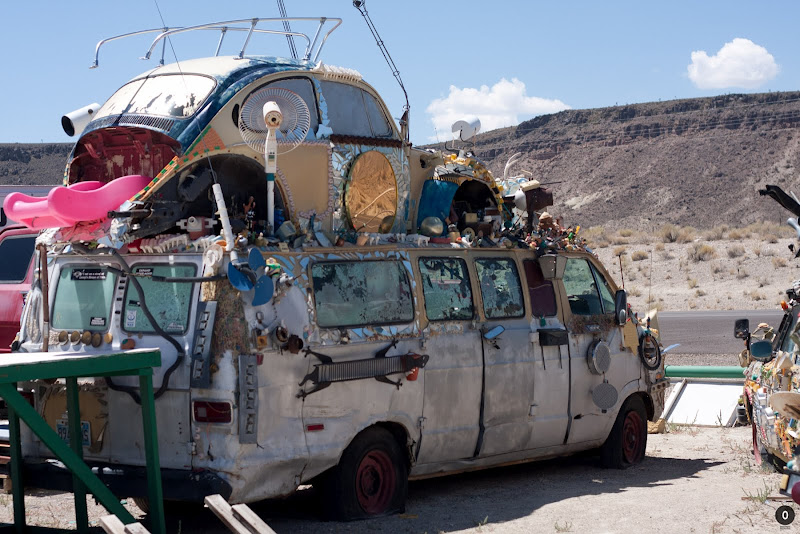 Back on the road we found ourselves at Glofield where there was a junkyard garage by the side of the road, owned by this old eccentric called RJ ... an ex-mayor of the village, a devotee(collector?) of  stock cars racing and of hoarding scrap metal..we spent a while discussing politics with him and his companions, and then got back on the road.

The miles went on and on, and we went through interminable dry valleys bordered by mountains, nothing to see, and so we pushed on as fast as possible (though our vans were limited to 95mph)(normally 55mph). But, we were going in the wrong direction: a mistake at a crossroads had led us back on ourselves. Despite all this we stumbled on this abandoned village, where everything had just been left as it was, and the unbelievable atmosphere encouraged us to stop in the junkyard in search of some treasure.
The sky was threatening, we could see an approaching sandstorm... David and Olivier had a DJ battle on the back seat of the Van, the women were dancing, I was driving and a bottle of Tequila was being passed round: a superb moment. 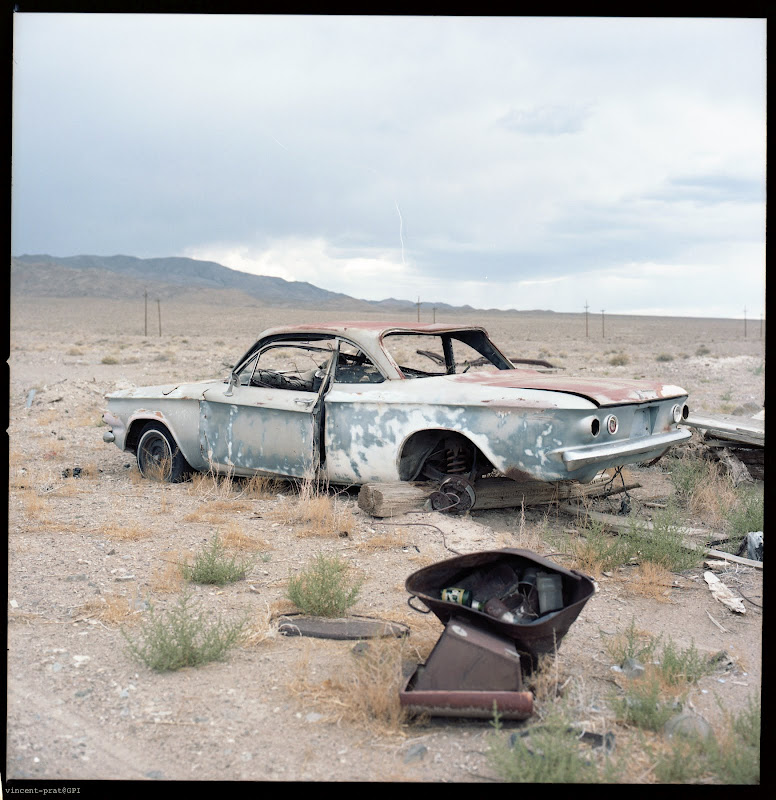 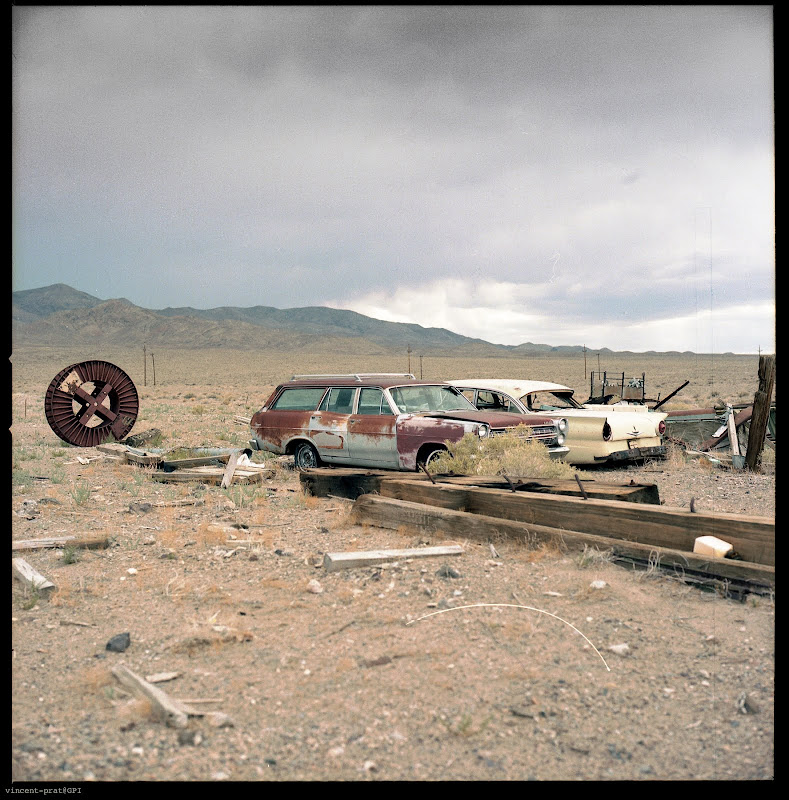 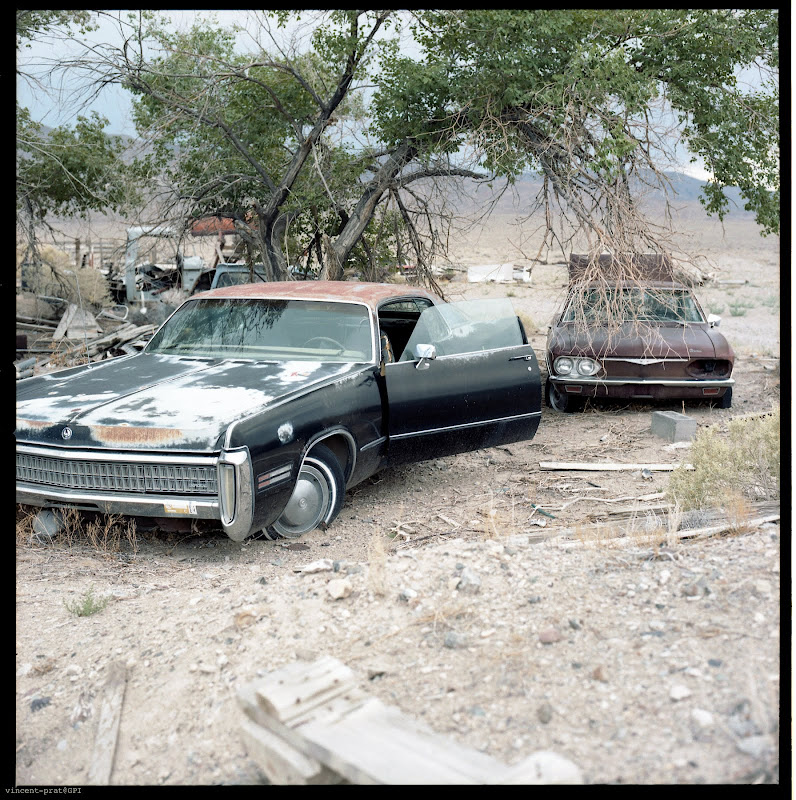 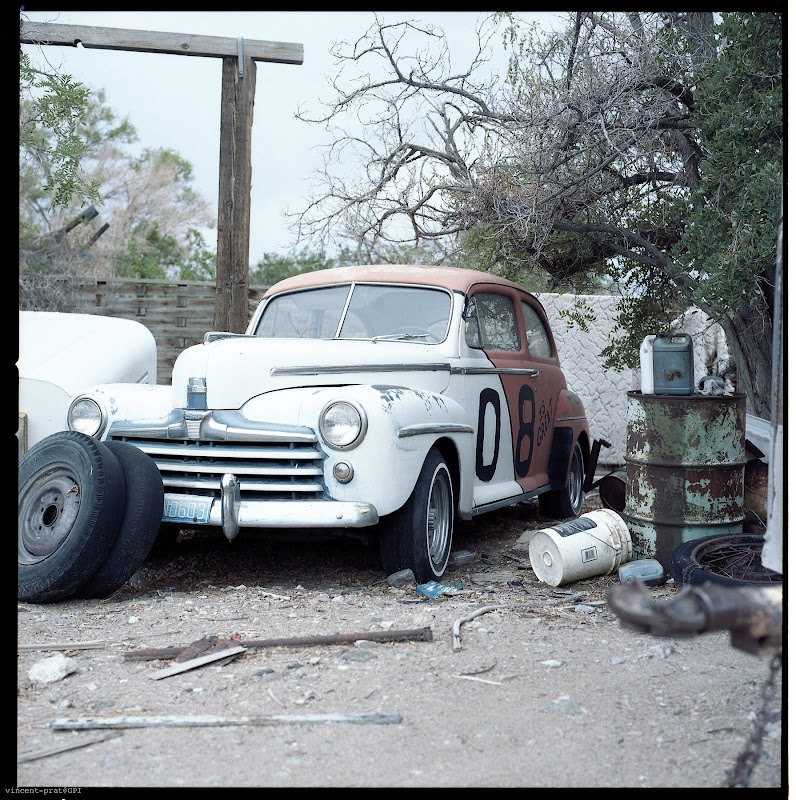 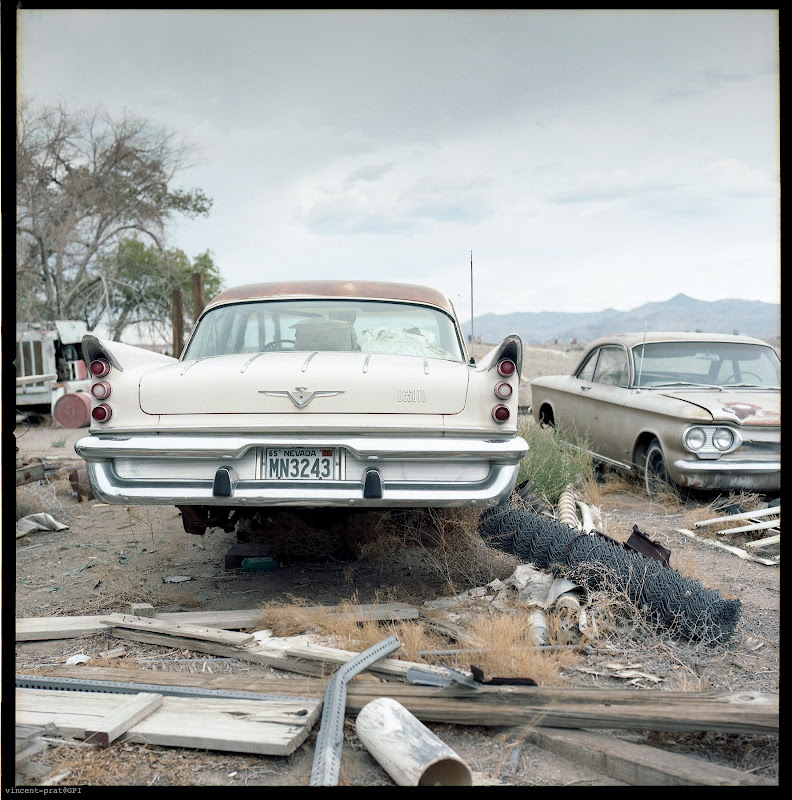 Finally we arrived at Austin at the end of the evening, after a 600 mile journey. Our stay 2 years previously in this lost village on Highway 50 ("The Loneliest") had left me with an amusing memory. We had stumbled upon a band of old crazies, gathered for their Hot Rod meeting, getting ready to drive to Wendover the following day, and ended up at the local saloon in a haze of bad Tequila (Cuervo). In truth we needed the help of a few drinks to get to sleep in the precarious conditions of our first night camping... 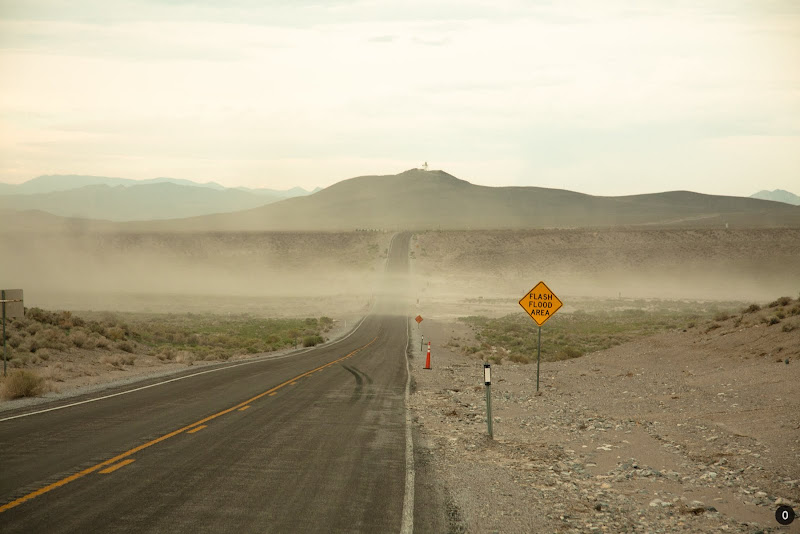 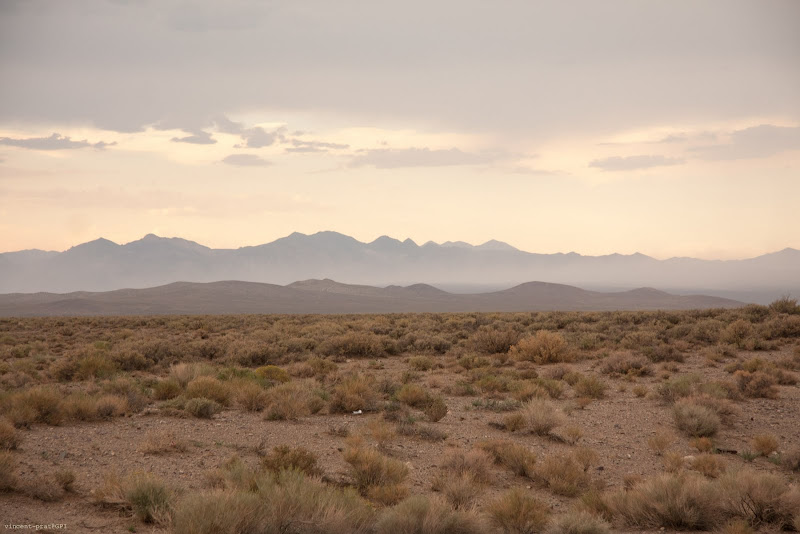 The next day, the big day, we were going to finally  reach Wendover and the famous Speedway, the final goal of our journey.
After a brief stop at Ely, we arrived at the entrance to the Speedway at the end of the afternoon in a storm with the rain pouring down.
In this  apocalyptic scene we passed the famous sign and went into the Stands to establish our camp. 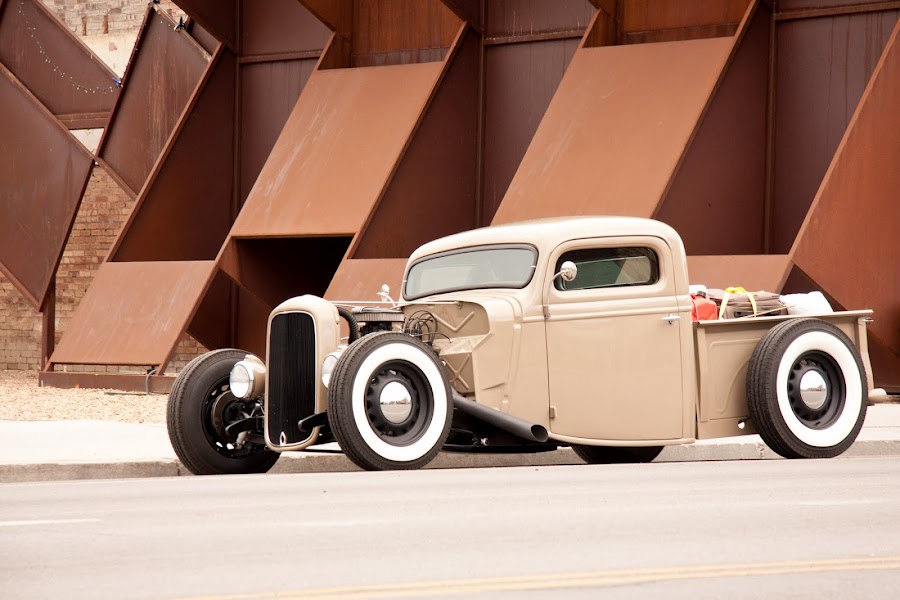 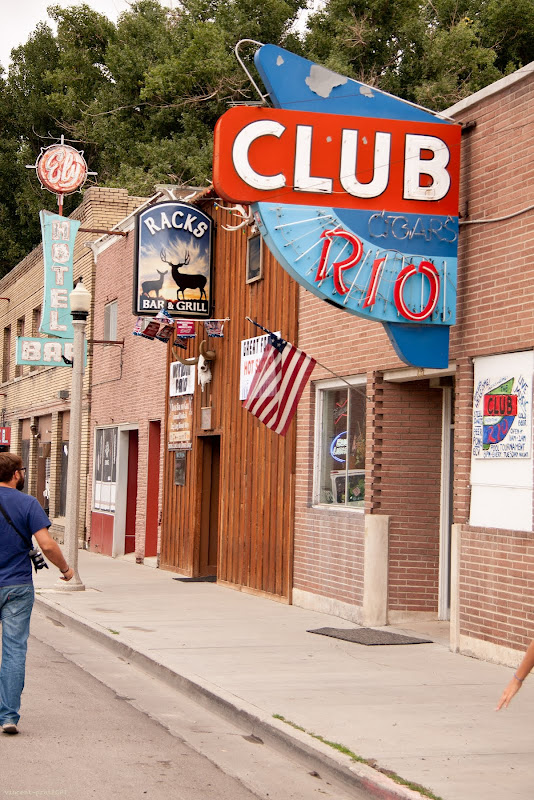 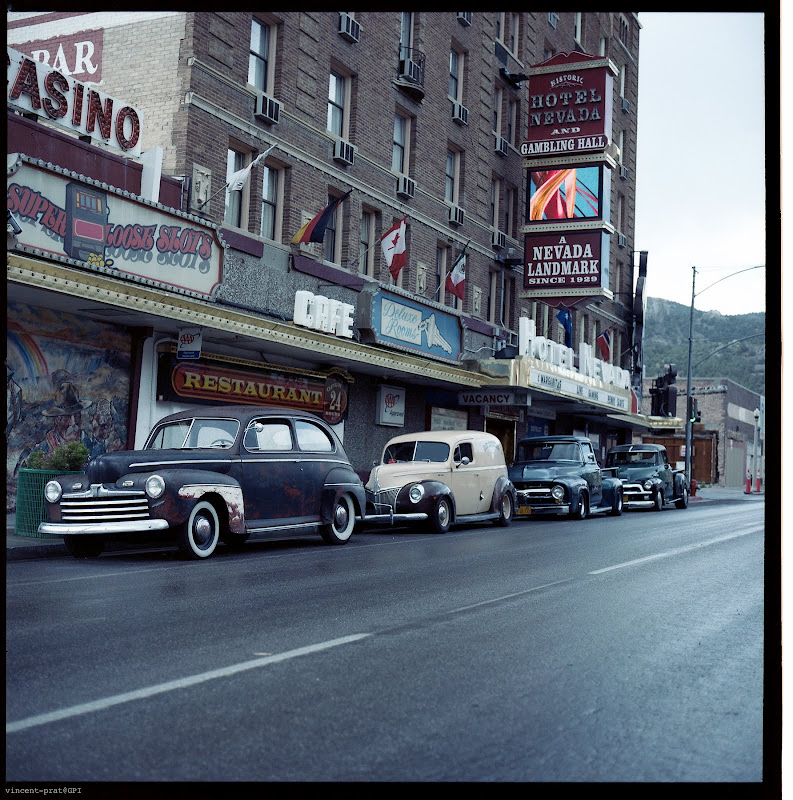 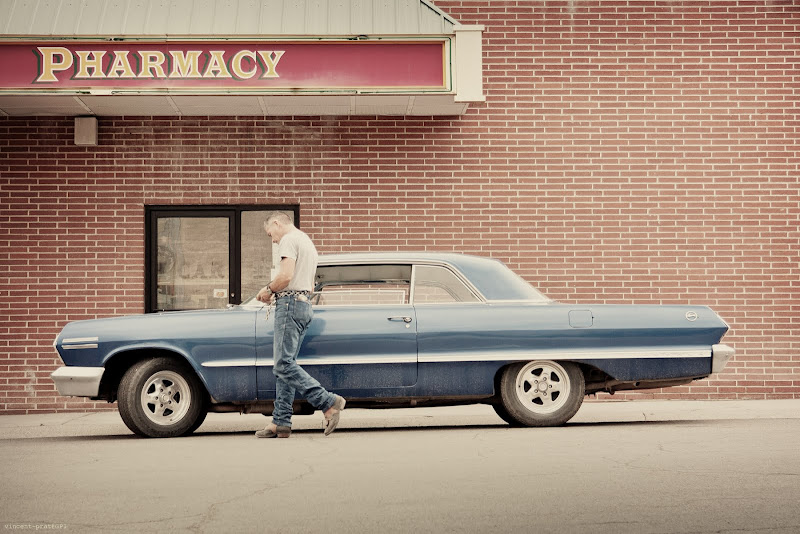 Ely in Nevada is a Time Capsule

The weather was sometimes daunting, but never lasted long. We met up with our friends Kristina and Maxwell who had come from Spain and England to accompany us on our great adventure. 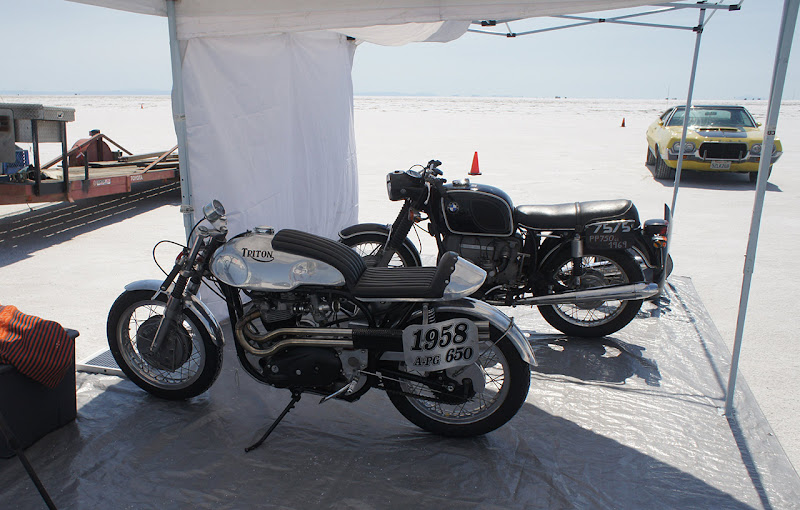 Tomorrow would be a great day: Speedweek was about to start!