Ride with the Devil


As a contrast to the prior post critical of contemporary motorcycles, the following is my road test report for Ducati France, who were kind enough to loan me a limited-edition 2012 Ducati Diavel 'Chromo' for the Southsiders 'Wheels and Waves' event last month. It's not entirely old bikes in The Vintagent's world...
"Asking a Vintagent for his opinion of a modern sporting motorbike might seem odd, exposing the unbridgeable gap between his typical road-test fodder (Brough Superiors, ancient BMWs) and the Ducati Diavel Chromo I recently rode on the Southsiders 'Wheels and Waves' through the western Pyrenees. And yet, in my saddlebags of Riding Experience swirls the whole history of sports and racing bikes; from 1920s flat-tankers, lighter than any contemporary roadster and exceeding all expectations of fun, through venerable Norton Manxes which inspire heroism, to chubby 1970s Metisse-framed Japanese fours, desperate attempts to marry a non-wobbly chassis to an unburstable engine. I’ve even owned a few –whisper it – modern machines, which, by lucky coincidence, have all hailed from Bologna; from Ducati bevel-drive Supersports in the 1980s, to a 907ie Paso in the 1990s, some saddle-swap time in the 2000s on a 748, and California road-ribbon cutting on a 1200 Multistrada two years ago. Let’s just say my membership number in the Ducati Riders Club is pretty low, and I’ve kept credentials for 30 years. I’d even ridden a Diavel for Cycle World magazine last summer, but that was in Indiana, of all places, virtually a desert for corner-lovers, and no place for a proper appraisal. 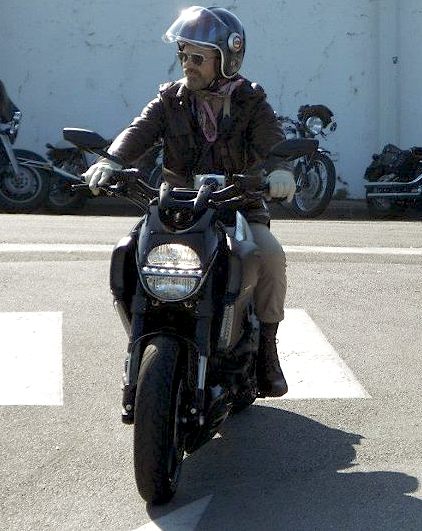 If you’re a rider who enjoys playing pendulum at the end of gravity’s tug, the wide world of fast and competent machines provides endless options, all of which have their merits and demerits. The Diavel exists in a category of its own making, a fact much discussed in the press, and by every rider who first encounters one. Reaction 1; ‘What is that?’ Reaction 2; ‘It must handle like a camel.’ Reaction 3; ‘I love it/ I hate it.’ No sense being coy, the Diavel is a rare Statement in a motorcycle industry cowed by fear into same-sameness. Before we say anything further, let us praise the decision-makers at Ducati for their bold move, and for succeeding, as the Diavel is clearly a sales success. But my job here is to discuss its success – or not – on the road.

Ride prep is simple; stick the electronic key in your pocket, flip the 'kill' switch and press the wake-up button, which starts a video onscreen (you were expecting needles on gauges?) of laser-cutting a Diavel logo, a moment of Badass to remind you, rider, of what’s to come. The screen then allows you’re in one of 3 modes; Urban, Touring, or Sport, computerized miracles to save your ass when things go sideways, or let you fly tetherless like an angry hunting animal. Simply put, the 3 modes are a balance of traction control, anti-lock braking, and horsepower. My esteemed handler from Elite Motors recommended starting in Urban, with least power/most help, and exploring more power/less controls when I felt comfortable. Before we'd even left the parking lot, 5 other monkeys tried out the Diavel’s saddle and poked the controls and my bike had been upgraded from Urban to Sport without my knowledge, and no, I didn’t check before we set out. Mea culpa. Result; one lurid rear-wheel slide as I gunned it while banked over, coming out of the first roundabout, and one wheelie on hitting the first decent straightaway. I realized soon enough this was el Diablo puro, and took it easy on the throttle on that first 15 mile ride.
My second ride, about 120km, promised the green hills and twisting lanes of the lower Pyrenees, in company of a motley assembly of machinery, 1970s and newer, with very competent (read:fast) riders – those Southsider boys don’t hang about. I clearly had the advantage of horsepower, but the roads were a mix of tight twisties, interspersed with short stretches of open farmland. How would the mighty (read:large) Diavel take the cut-and-thrust at which smaller machines excel? And here is the Devil’s surprise; she’s exceedingly well balanced, shockingly nimble actually, and her apparent bulk disappears once she’s in motion, even at low speed. For a bike so large, this seems nothing short of a miracle, and Ducati’s chassis engineers deserve praise. For all practical purposes, the Diavel feels like a nicely balanced middleweight, albeit with a Lot of horsepower.

Let’s talk about that power. With plenty of MotoGP experience, wringing giant hp out of v-twins is Ducati’s forte, no surprise there, but it’s the character of that power which constitutes the ride experience. The Diavel’s power is everywhere, in massive abundance, from 1800 rpm upward to its 9500rpm/164hp redline. Handfuls of Fast are available to you,instantly. Generally, this was a joy, although in the really tight stuff, the 50kmh corners following a footpeg-scraping Commando, moderating such awesome urge requires a light touch, extreme moderation, and finesse, even in the ‘softer’ modes of Urban andTouring. Throttle response on the Diavel is sharp, and at these moments, the true character of the beast is revealed. The Diavel is a tiger. Forget this fact at your peril; don't pussy-foot with this machine if you want to ride fast in tight spaces, it requires a tiger-tamer’s muscles, focus, and Will. In short, a skilled rider will get the best of it, a less-skilled rider will scare himself silly, launched toward parts of the road he hadn’t intended. Pay attention, be the boss, master the beast. You’ll be rewarded with all sorts of adrenalin juices, satisfying growly noises from the engine, and rapid arrival at your destination, probably alone…unless there’s another Diavel with you.

In less demanding situations, riding the Diavel gives bags of satisfying grunty power, hurtling you forward at warp speed. The handling generally is stable and neutral, and I never noticed odd cornering sensations from that fat rear tire (as I did on a Confederate…). The riding position is totally ergonomic for my 6' chassis; super comfortable, with an all-day seat and lower-back-loving upright riding position. The downsides; without much wind protection above your shoulders, anything north of 150km is blasty and not much fun for the long haul. The footpegs are devil-horns, pointed and, if you’ve scraped them on tarmac, sharp as hell; I still have scars in the back of my calves from simply parking the beast. Still, on a long-distance ride, like a California tour of the Sierras or coastal Highway 1, the Diavel would be an absolute blast, the grin-factor and surprising comfort make day-long rides fatigue-free. Anyone with moto-consciousness will take note of the Diavel’s outrageouslooks, and anyone on a lesser machine – this would include most motorcycles - will note being left for dead by a roaring tiger."