David Tiger grew up in the Maine and Loire region of France. His father was a car mechanic and his older brother showed real promise of a brilliant career as a racing driver but sacrificed the opportunity and chose instead employment with Michelin. So David clearly had motor oil in his blood and only his schooling stood in the way of a bright future.

David’s 5th year French-Latin teacher, Mr. Marzin, once exclaimed that David would still be riding his moped when he reached 40 years of age, David who always had an answer, replied ‘yes but it will be the fastest in the world!

In 1990 with an apprenticeship in patisserie behind him, David left his parents home just 48 hours after receiving his certificate, and with a very basic knowledge of the English language, he made his way across the channel to London. A close friend Didier ALBERT had previously introduced David to the world of Hot Rods and Dragsters at the Festival of Drag Racing in Le Mans in 1983, and it was in the UK that David chose to pursue his passion for speed…

David arrived in London the 24th June 1990 and immediately began knocking on restaurant doors in the search for work as a chef. In 1991 he had already built his first hot rod in a garage workshop belonging to a friend and professional mechanic, all for a total build cost of 2000 pounds! The paint was applied using house paint by hand, using two long and fine haired brushes, the brushes were the most expensive parts bought for the project! The finished result amazed the UK rodders who believed the paint to have been applied with a spray gun!

A young French girl from Grenoble was one of those impressed by David’s talents, and she was soon to be seduced by the UK hot rodding scene. Returning from Santa Pod in a typical English down pour, their roadster was proving difficult to keep in a straight line. Phone calls to the Police by concerned motorists too afraid to overtake soon had Police on the scene, and they kindly escorted the ‘skateboard’ off the motorway..

In London David is known as the Tiger, le Tigre… His enormous talent in the kitchen has led him to work alongside celebrity chef Gordon Ramsey and for the actor Michael Caine… savings from which they hoped would one day allow David and Cloren to fulfill their true dream, that of living in California.

So in 1999 David and his fiancée Cloren arrived in Las Vegas where they married in the same chapel chosen by Demi Moore and Bruce Willis for their wedding. Their honeymoon took them to Carmel and Monterey and it was love at first sight… David returned again in 2002 and worked for three months with Paris Bakery in Marina, and Cloren discovered a Pastry shop for sale in Salinas. 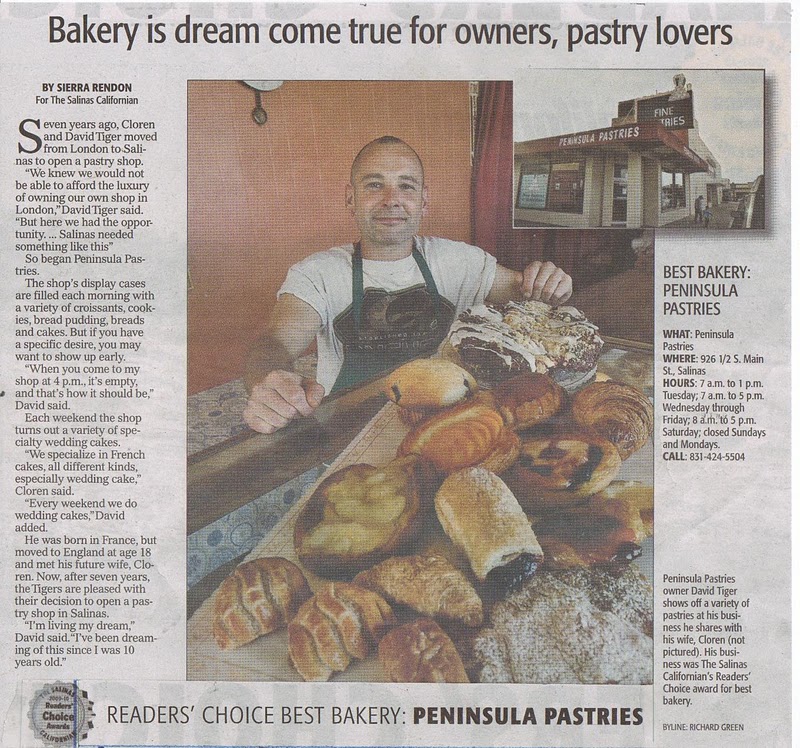 One weekend in September David headed off to see the speed trials at El Mirage, he was hooked, and they decided to make their future in California and purchase the pastry shop. They returned to England and sold their house in London, organized the paperwork for the purchase of the pastry shop and began the process of obtaining a business visa.

The visa arrived the day of David’s birthday on 19th March 2003, and they wasted no time in heading back to California arriving in San Francisco just eight days later on 27th March!

‘Peninsula Fine Pastries’ is born but the going is tough, long hours and an inapt work force. David attends El Mirage regularly and it is there that he meets his first real American friend, Chris. It’s through Chris and while racing his far out Mobylette that David also met Fufu, mechanic for the record breaking DS V8 at Thunderfrog in 2008.

One day David decided to prove to his old school teacher that at 40 years old he did indeed ride the fastest Mobylette on earth. After several months of unsuccessfully searching for a Gitane Testi, he abandoned the idea and called on his old friend Didier Albert and owner of Retro Racing in St Fiacre (44) to source him a second hand racing Mobylette… in no time a machine was purchased through the bon coin for just 300euros. 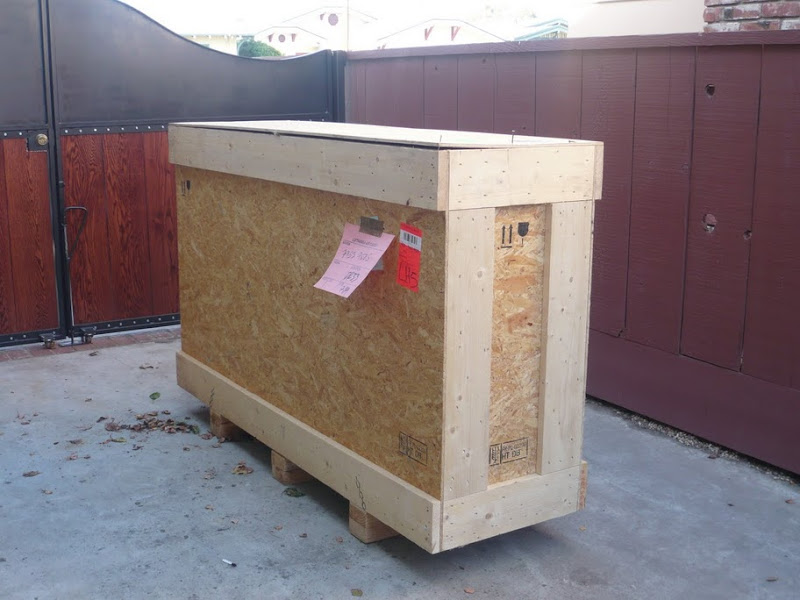 The Mobylette was boxed up and sent off to the States arriving 15 days before the start of Bonneville Speed week in 2008. 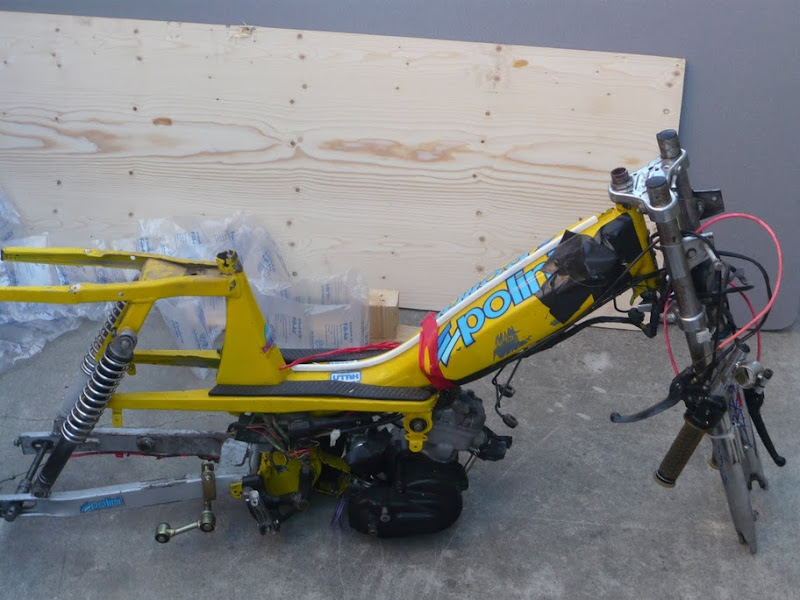 The Mobylette was in bad shape and time was running out! After a dry build the MBK51 was stripped, sanded down and painted brown. A starter with obligatory belt drive was built by his ingenious neighbour Marcel. 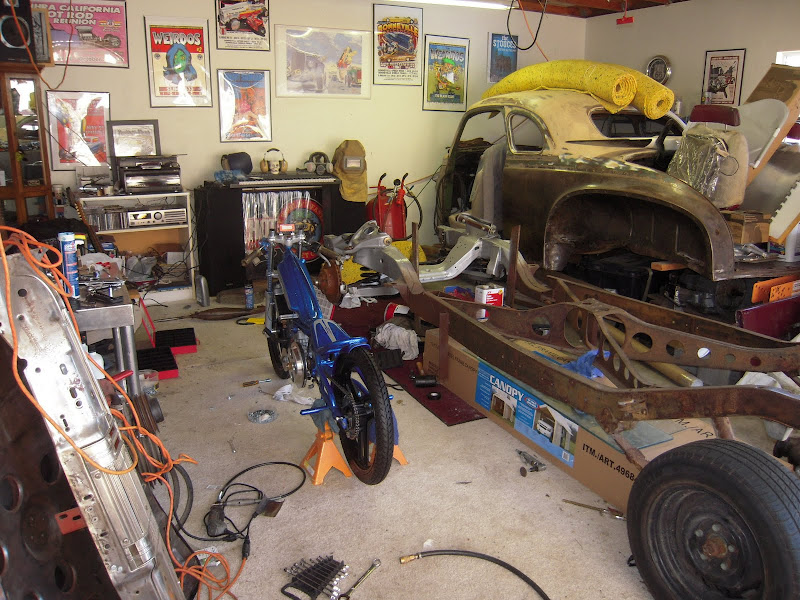 Both David and Chris competed in the speed trials, but as David had no equipment of his own everything had to be shared… as Chris was also competing with his Yamaha R1, this called for some very rapid changes of combination and equipment in sweltering heat! The race scrutineers told David that the tires fitted to the Mobylette limited him to just 45mph… David was therefore confined to the Vintage production class. As it turned out this was a blessing in disguise as the Moby maxed at 47.488mph! Despite the upsets, the SCTA awarded David the performance award for his efforts and tenacity, quite amazing considering that earlier in the year the triplettes de Bonneville had arrived with the Mobylette in three suitcases! 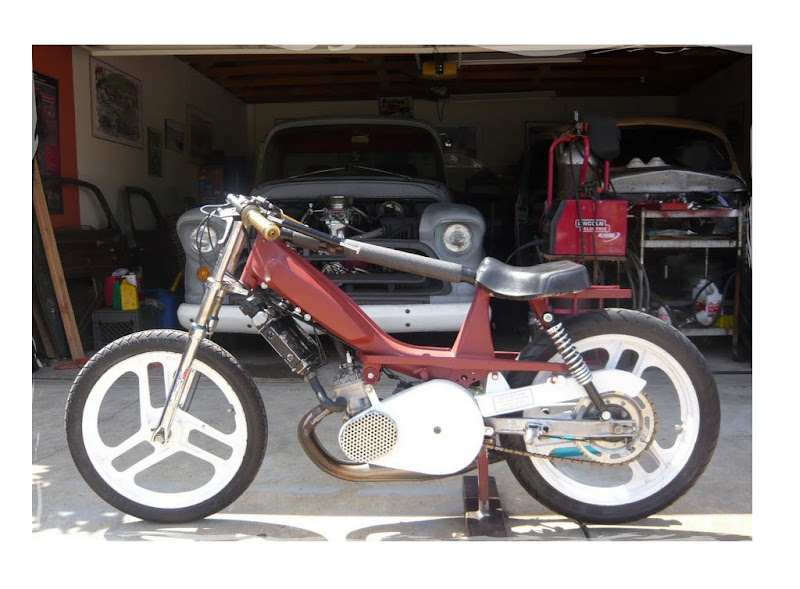 In 2009 the forks were replaced by a pair from a Tomos and the tired motor was shipped back to France and into the care of Thierry Girard who also prepares engines for Retro Racing. A new heavy duty clutch was also included in the delivery that arrived just three weeks before the start of Speed week 2009. Fufu lent David his coveted one piece racing suit, a Vogue Sport Millesime 1974 with which he raced in the Championat de France 50 in 1974-75… very classy! Things become complicated when Chris was called away to sit his Police entrance exam… In desperation David called up Hank a handyman who had just repainted David’s house, and Francais a friend and ex Policeman. Both complete novices whose combined mechanical skills didn’t stretch beyond the use of a bottle opener! 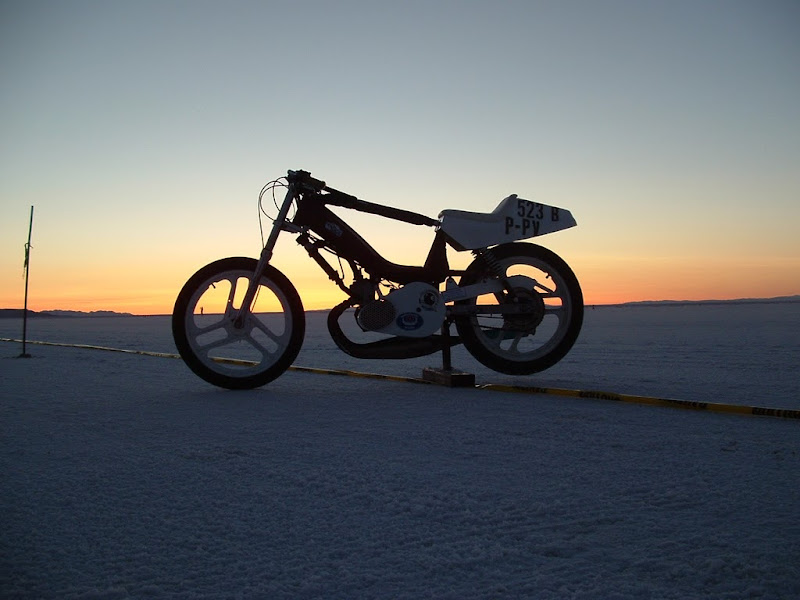 Despite the headaches, David registers an initial maximum speed of 62mph. It’s a major disaster, the house painter didn’t understand that he should recover David at the end of the course sparking anger amongst the SCTA officials… and the ex-Policeman who couldn’t understand David’s passion for this particular motorsport run on the mystical salt flats, hitched his way home… 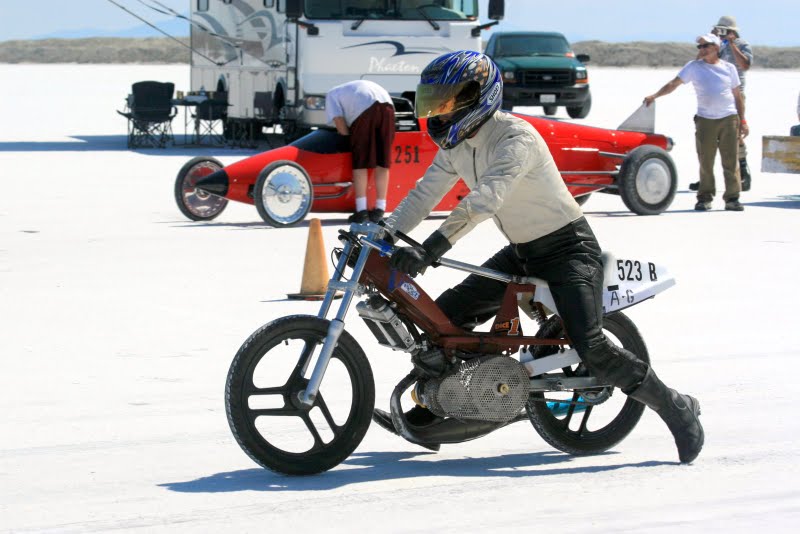 During the winter of 2009 – 2010 rumors circulate at Salinas that David is having difficulty getting back into racing after the exploits at Bonneville. A visitor to the pastry shop informed him that his sons owned a Hot Rod garage in the next town and that they could help him build another Mobylette in exchange for a mention in the press, plus a few cakes.. quite a few cakes in actual fact! 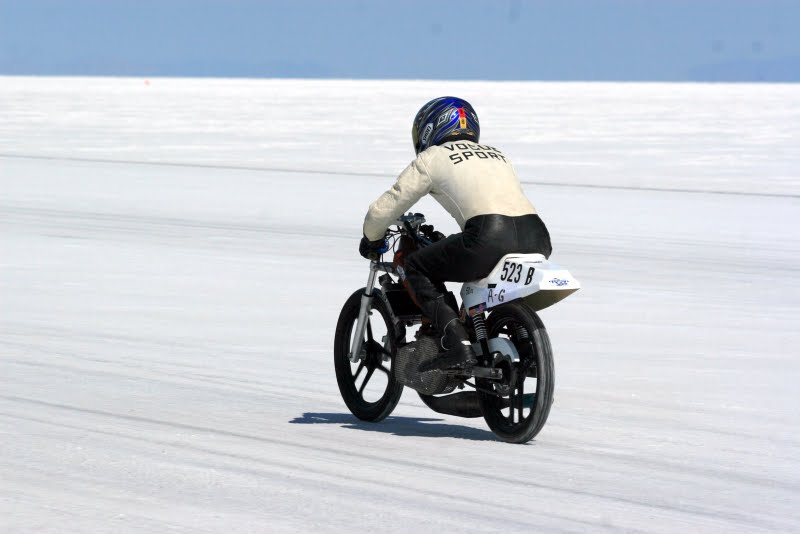 And so in January the Campos brothers began work on the Mobylette and finished just… 4 days before the start of Speed Week 2010! The finished bike was a little gem, with a bobbed rear end supported by a tubular structure with drilled gusset plates, a small seat formed from sheet metal and a paint job in blue and grey metal flake, a hand painted racing number and all highlighted with pin striping. The Mobylette reassembles a 60’s drag bike, perfect! Massive thanks to the Campos brothers…! 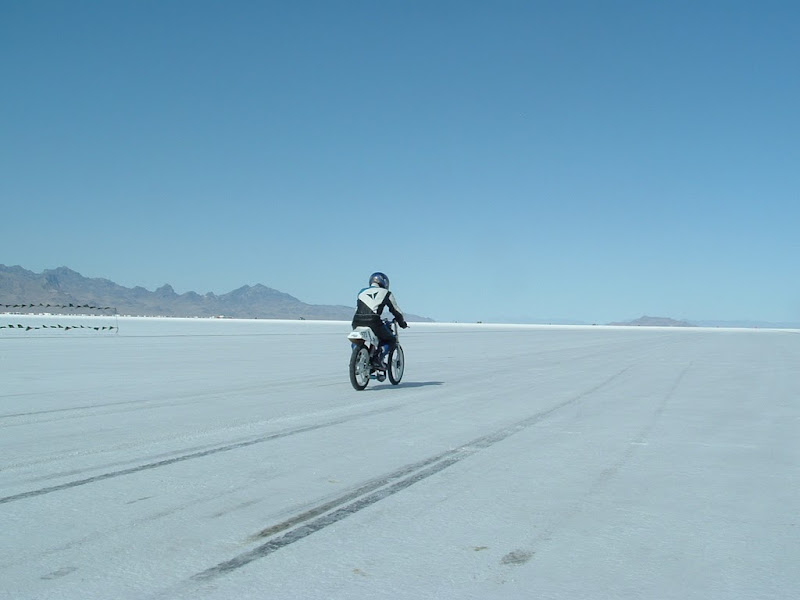 Things got even better when Didier Albert flew in from France and Fufu returned from Los Angeles. Everything was organized with military precision between stopping for a beer and a laugh and later returning to the hotel exhausted. Everything worked like clockwork and the Mobylettes speed increased with each run with a top recorded speed of 78mph. Eventually the wind picked up and the speeds dropped, they headed for home with important lessons learnt confident of improving performance in 2011! 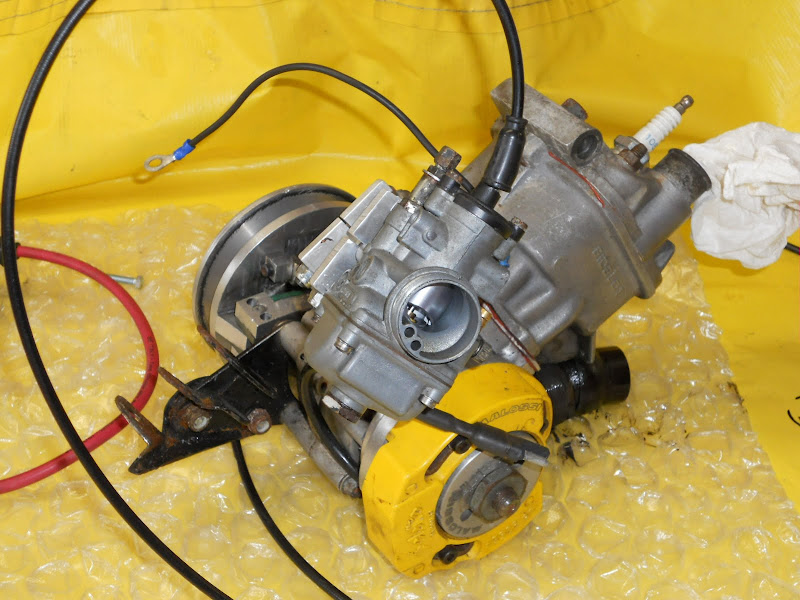 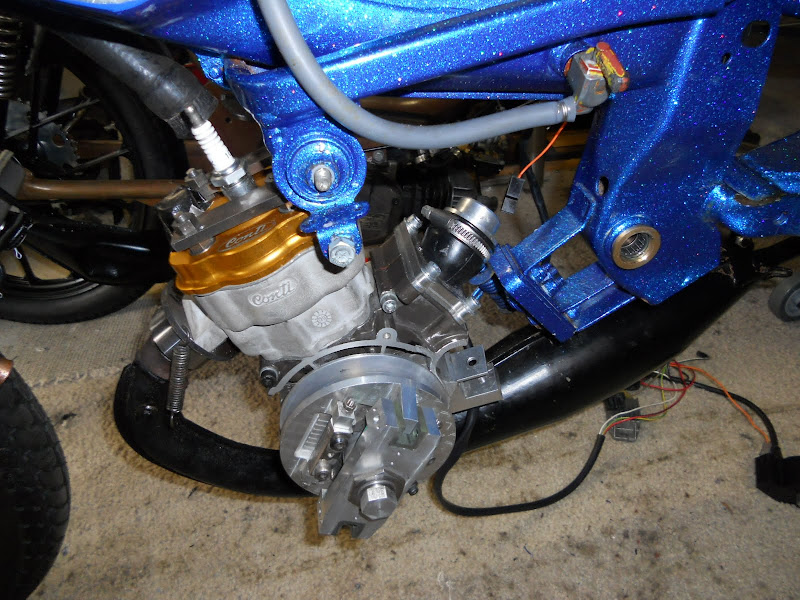 2011 – A new Derbi-Geraard-Retro Racing engine was delivered but just a little too late to be adapted to the 51 rolling chassis which had itself received some modification to reduce mechanical drag. They decided that if there were time they might change the engine at Bonneville if they were unsuccessful in beating the record with the 2010 engine setup, which had itself received some serious changes to squeeze some extra power! Also a set of Michelin competition tires with a aerodynamically improved triangular section. The addition of Kevlar drive belts also assured that all the improved performance would be safely transferred to the rear wheel. Departure at 3am Friday 12th August with a target speed of 86mph… David is confident… the pastry chef spreads his wings in readiness… 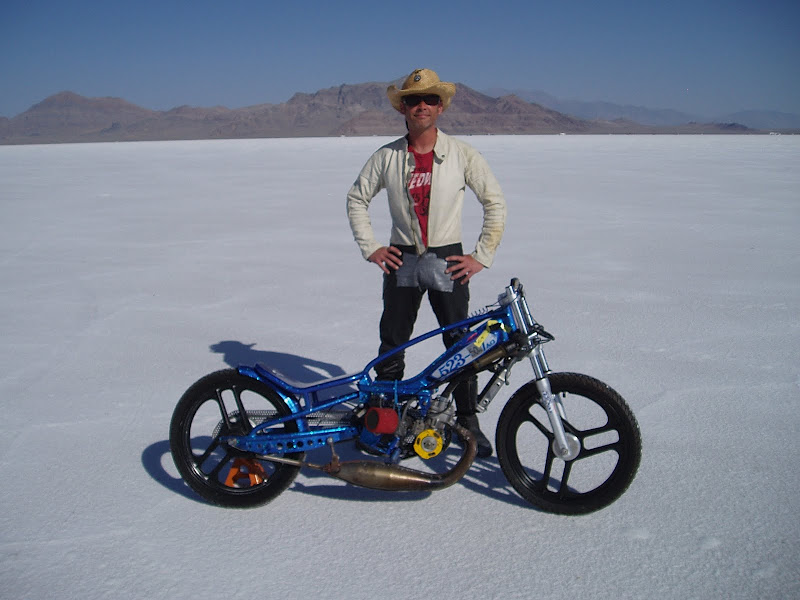 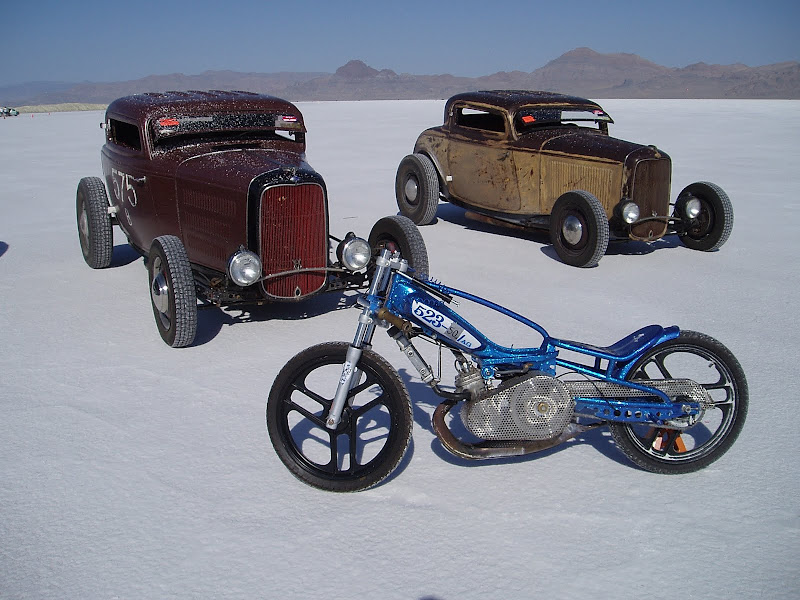 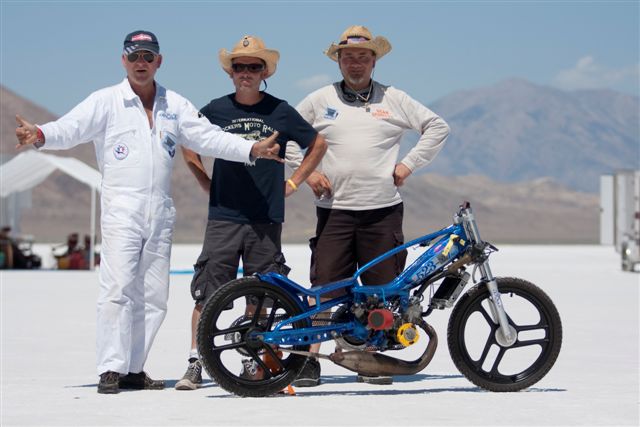 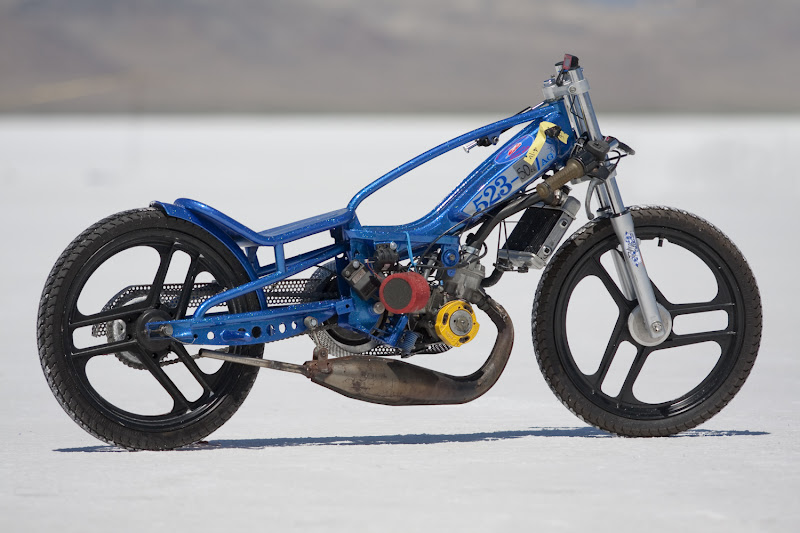