So Nemo came home two years ago , many hours of trawling the net, Images of Marty Dickerson and Rollie Free, Patrick Godet and his beautiful racer, it came back to me that I had photos of him racing at Brands hatch in 1983, these bikes where the inspiration now.

Nemo arrived promptly the Kickstart broke due to my physique akin to Gerard Depardieu, then I broke down on the road, who knows why, next time it stopped 7 miles away up by the lighthouse, I pushed it up hills and freewheeled down trying to bump, I must have lost 5Kg in sweat pushing up all them damn hills, completely dead, the Mag had died, no more magnetism, I bought a BTH electronic item, it is faultless (fingers crossed) starts with a gentle press of the foot starter, the bike runs through MK2 amals, desperately need jetting properly, it has higher compression pistons as of a black shadow, the clutch is lightened, it has genuine black lightning wheels and magnesium drums, it now has ducati scrambler mudguards front and rear, Koni race dampers, 1" 7/8 race pipes, I did experiment with trying to make some Lightning pipes from a comet system and a rapide 2:1 but it got too complex, the twin pipes are from JMC in UK and a copy of the Godet system, they were vey very loud so now have temporarily fitted VW beetle tailpipes, I have had much grief trying to get a good set up with rearsets which are good for Gear Change and brake control but do not foul the kickstarter, this adventure continues today, early on last year or so I spent much time messing about with the Seats and style, opted for the more period style of the 1930's with small seat and pillion pad, I think it has a nice sense of vintage, yet almost bobber 50's...No doubt the purist will be upset, I wonder if Phil Vincent would approve , I did read that he was upset by people who changed the machines and particularly the chassis by putting the engine in different frames as Egli or Norvin?

Furthermore I am always in awe of the Britten Race Bike as I feel his design principle echoed Vincent by utilising the engine completely, bolting the oil tank on top, headstock onto front and rear suspension swinging fork onto rear of engine and shock absorber onto back of oil tank, truly futuristic and minimalist.
Nemo though runs great, goes like stink, handles really nicely, a bit too well as its too easy to go too fast and ground out on some weird bit, feels very light - in reality its weight is very very low I guess, its a lot of fun and always brings a smile, in time I think we'll start getting up to decent speeds, 70-80 mph so far and quite fast enough, must sort the carbs, more plans, I did nearly buy a race tank similar to Godet, I wondered about fitting 19"and 21"enduro wheels and discs with knobblies just to really upset the purist......
I really like the Jeff Decker bike, seems he wizzed that one out of his shed quick style before the magnificent Falcon Partners produced their BLACK bike, can't wait to see that one as their Kestrel and Bullet are truly spectacular, those three bikes my current top three machines, although I am always impressed by the endless stream of Wrench Monkees and the Spanish Radical Ducatis who make some beautiful modern based cafe racer.

The inspiration of recent Vincent 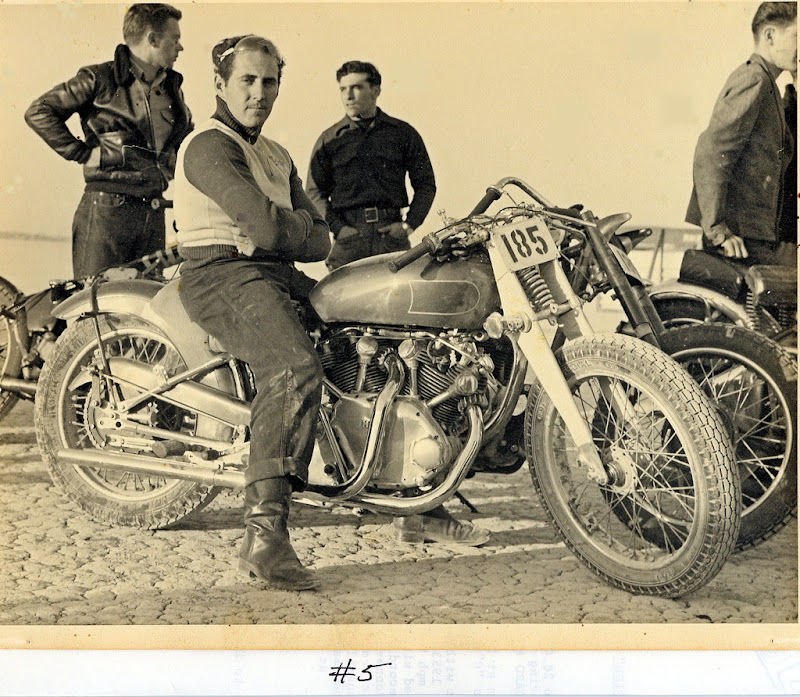 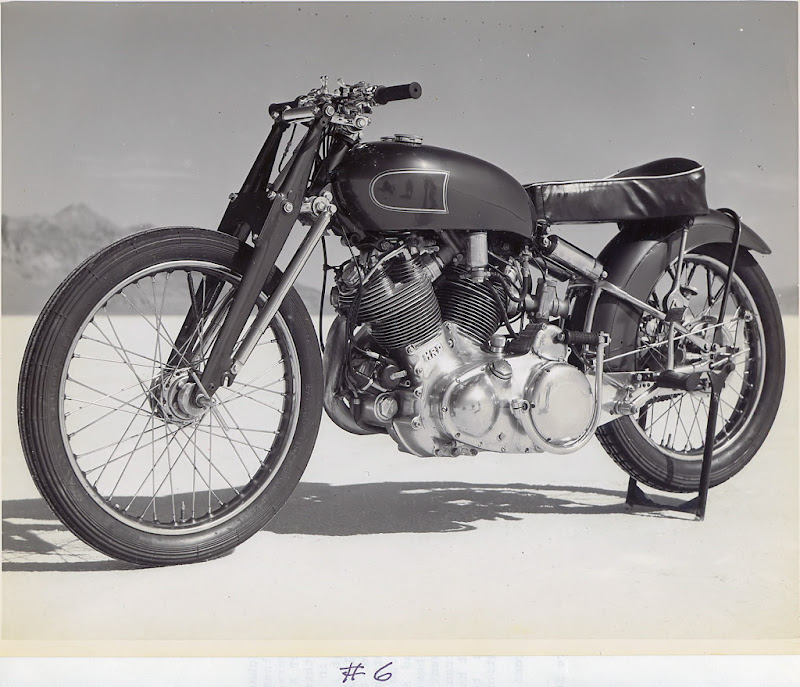 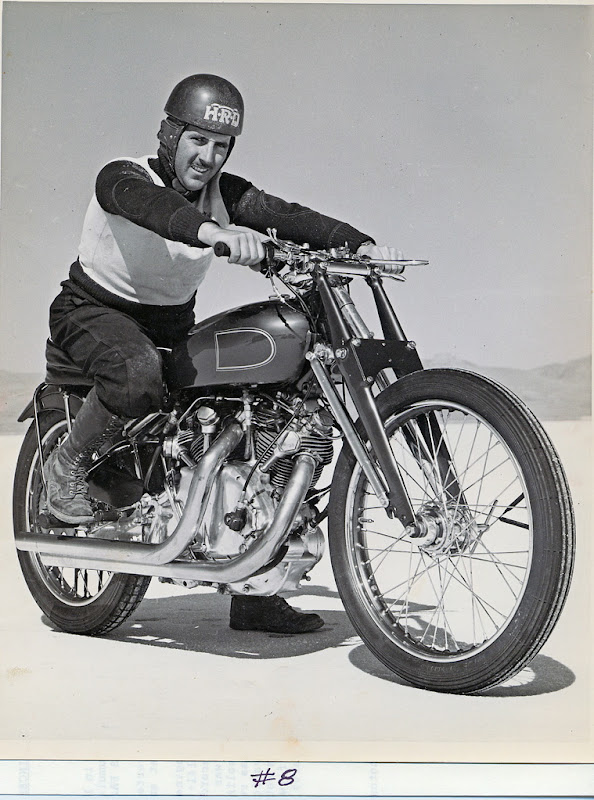 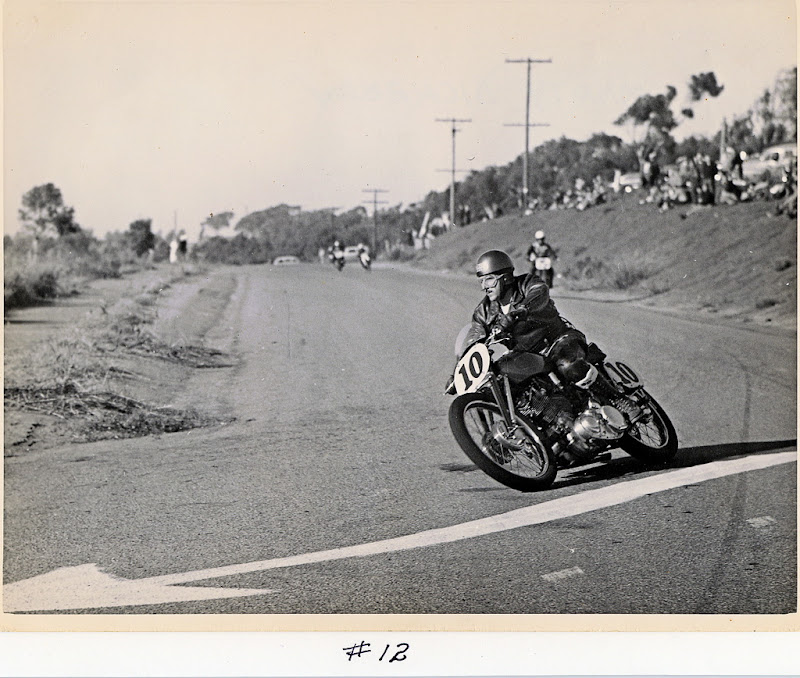 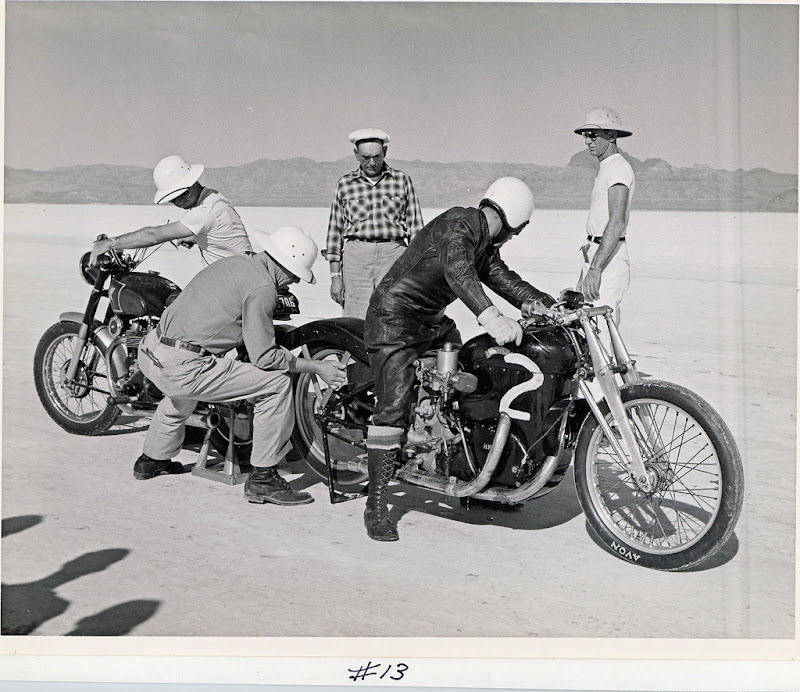 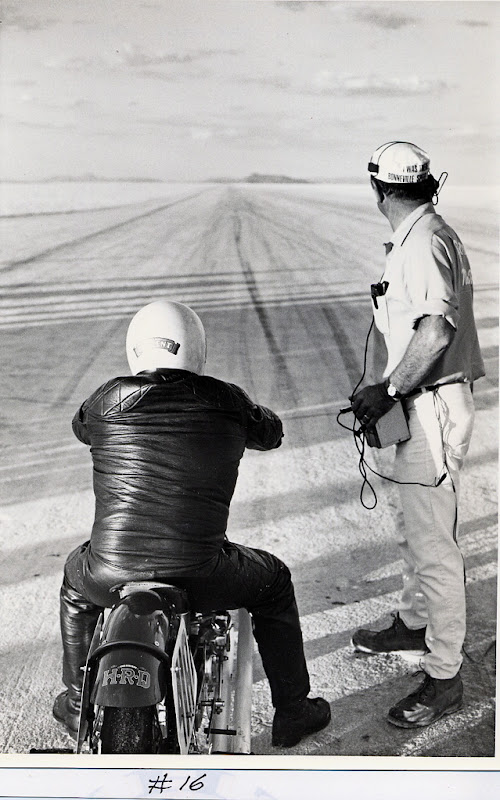 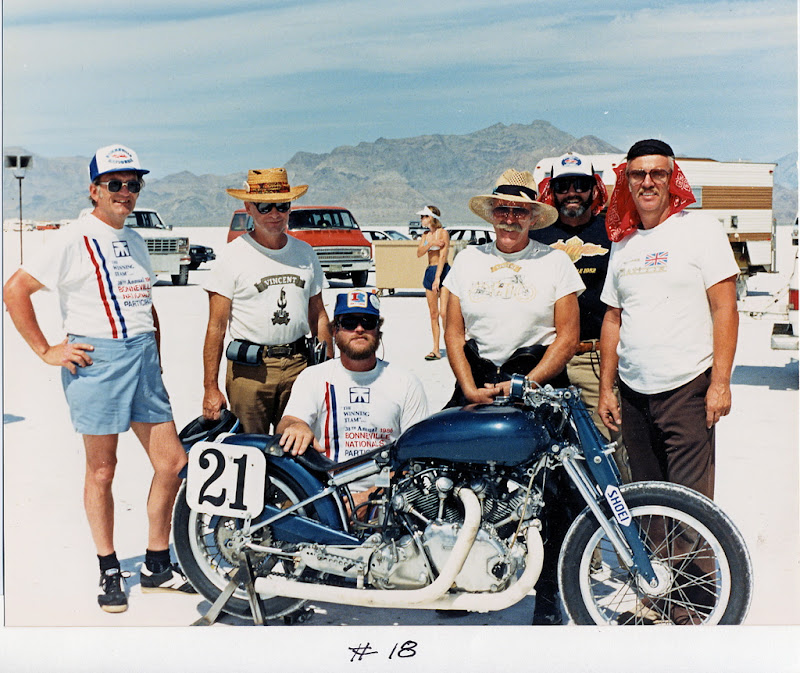 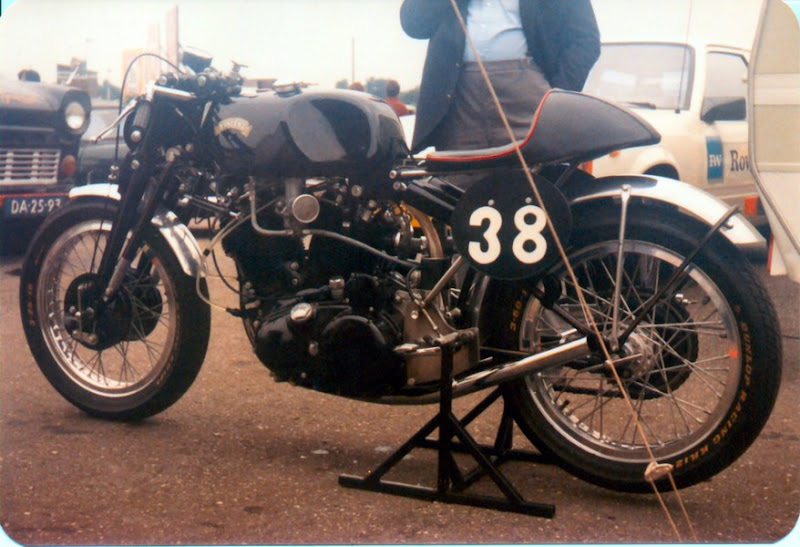 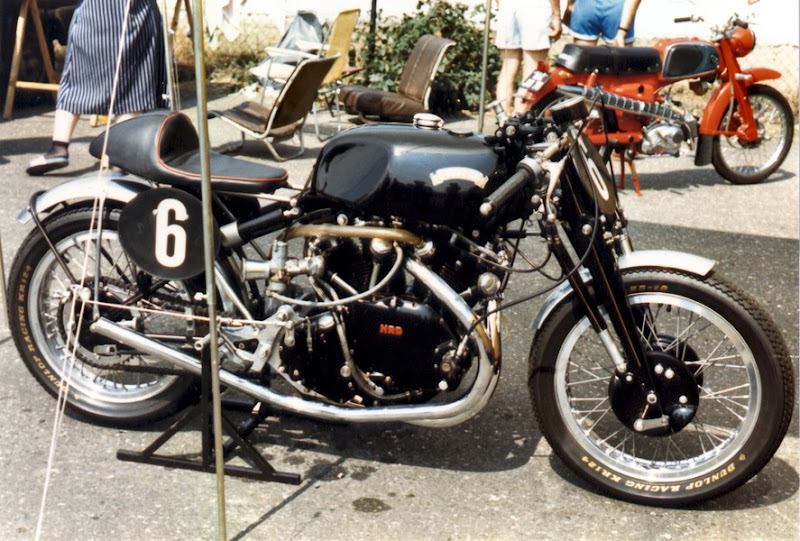 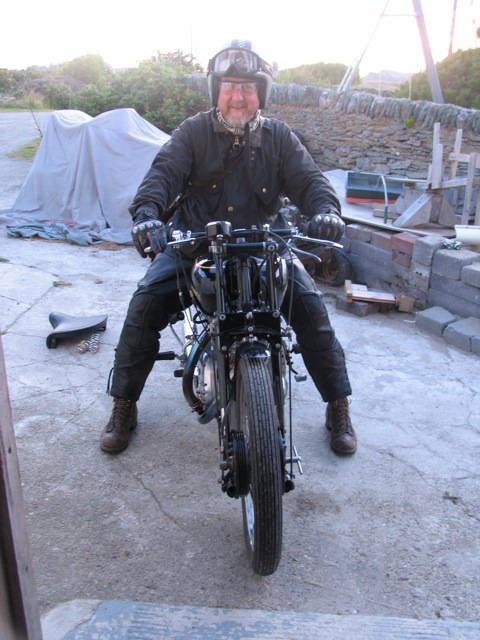 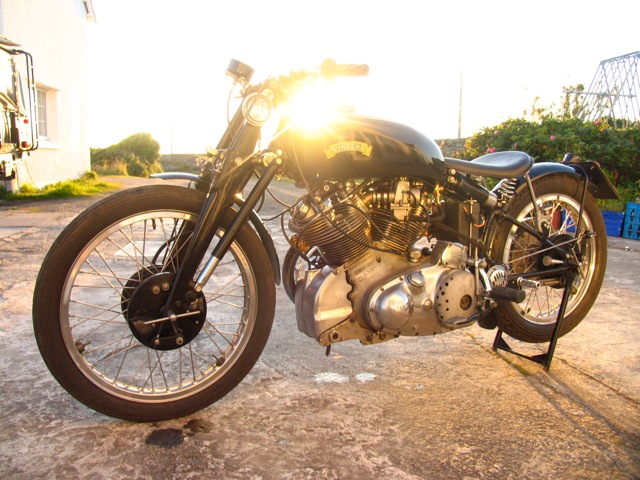 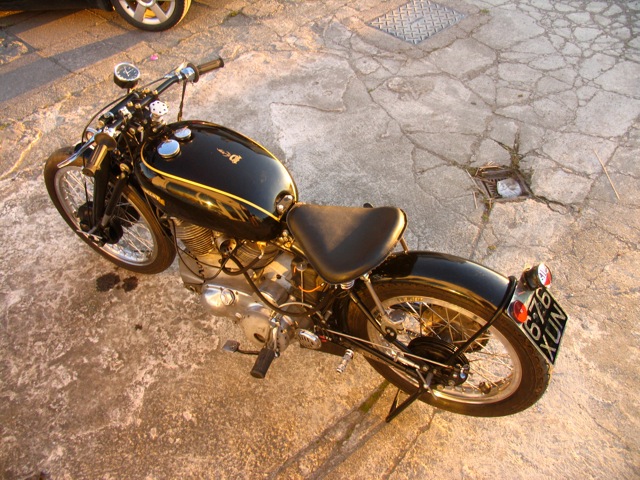 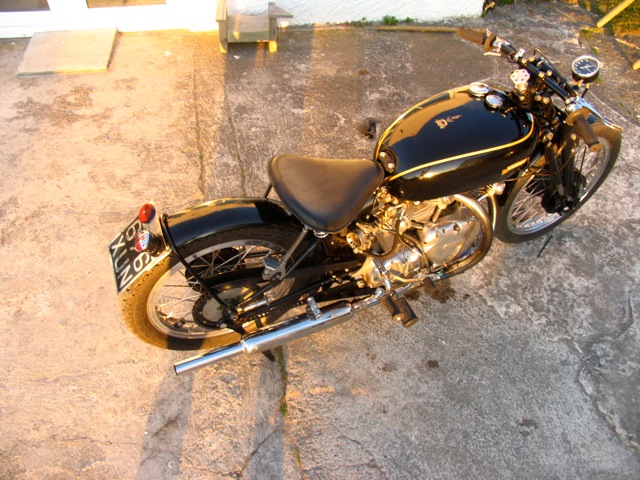 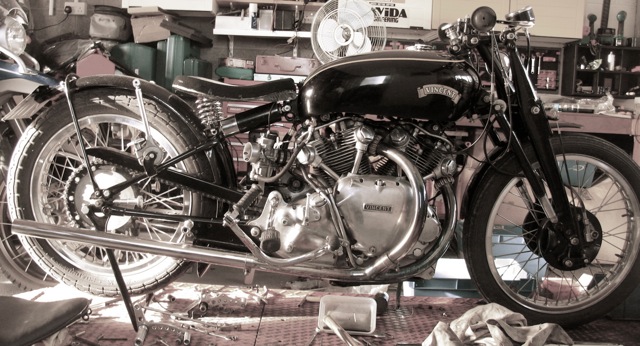 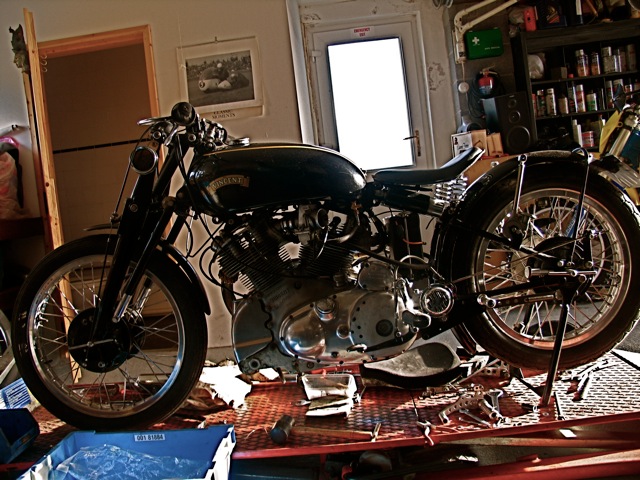 seats and guards on trial 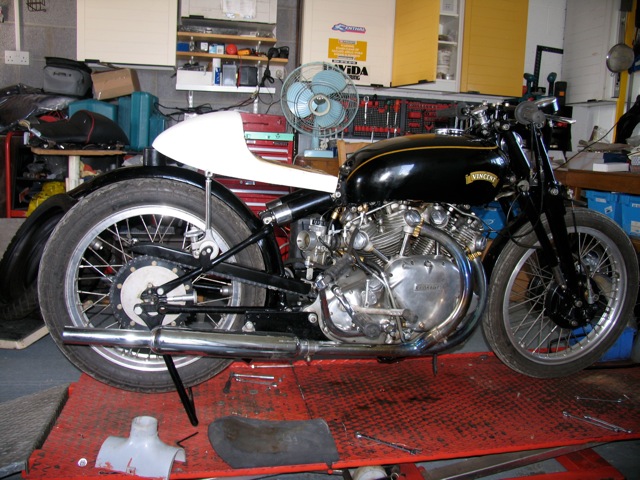 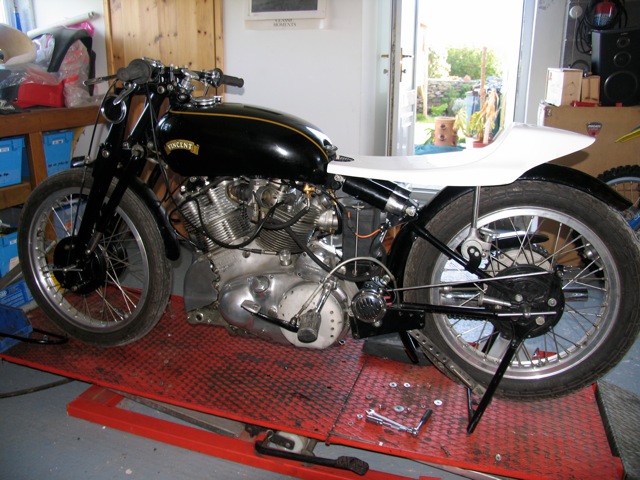 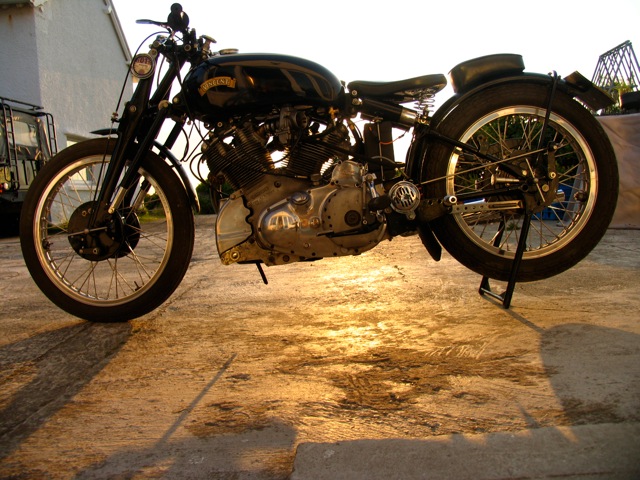 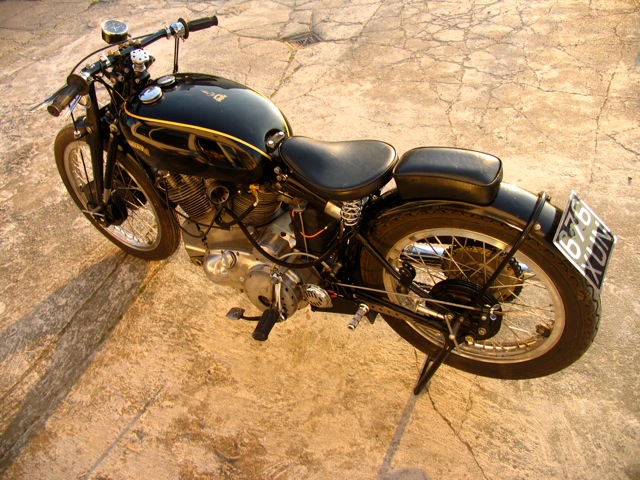 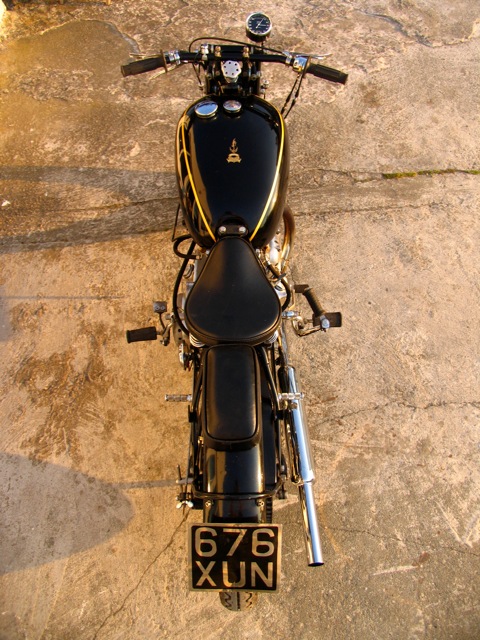 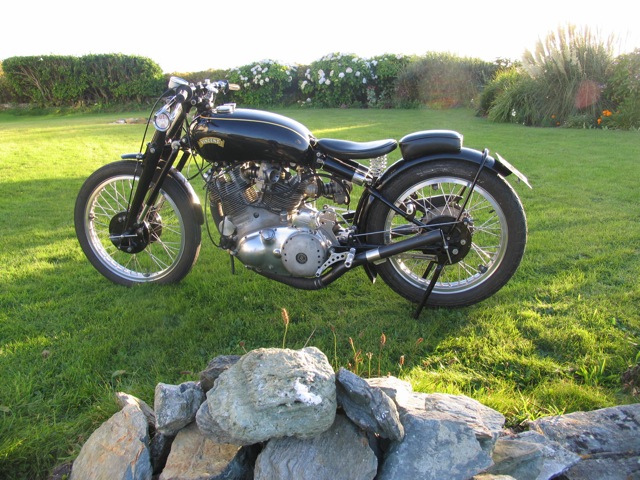 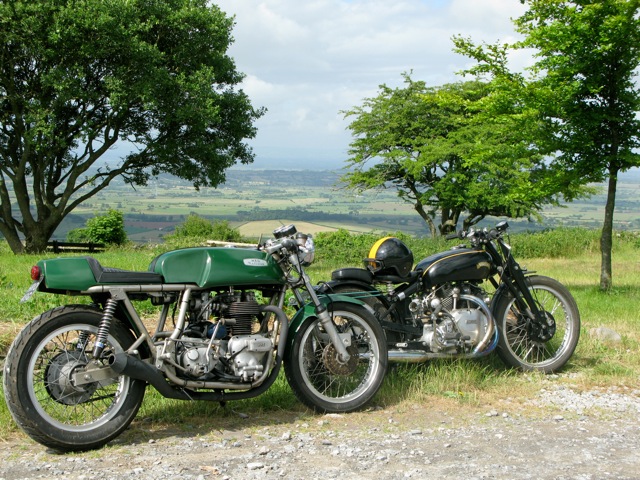 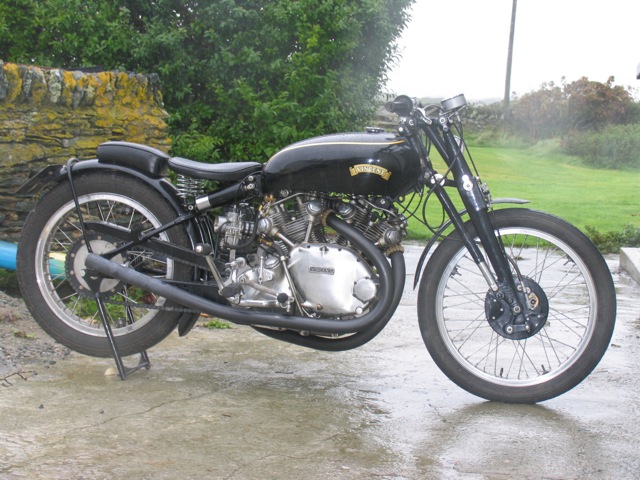 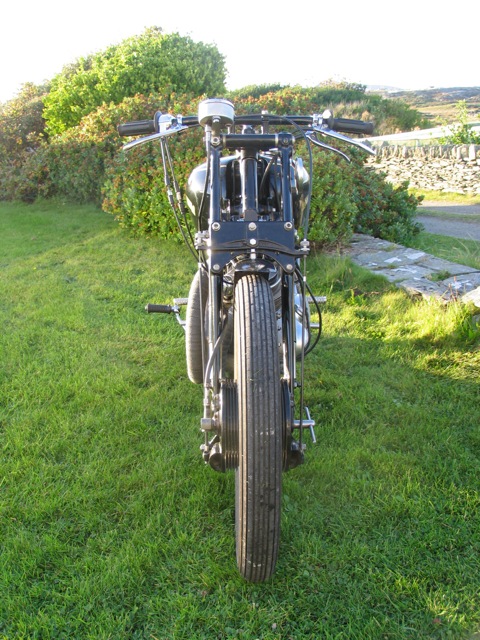 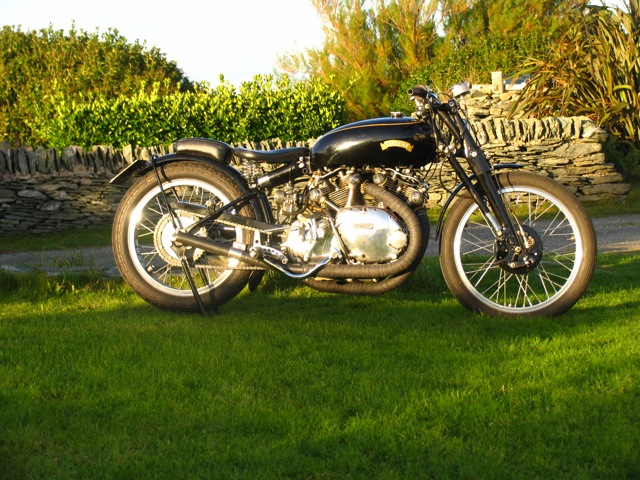 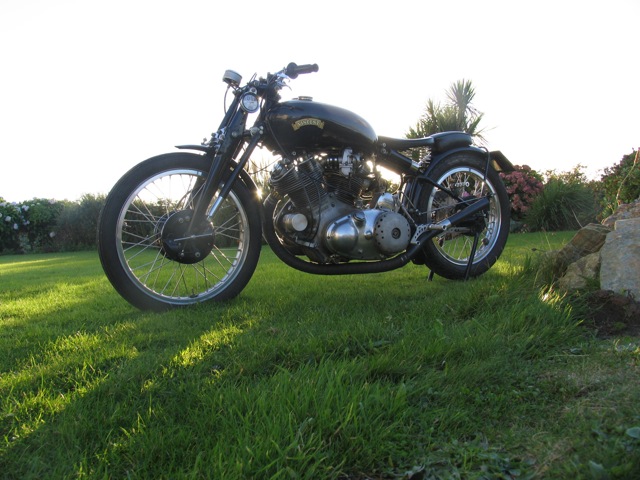