"Les triplettes de Bonneville".... why this name? Seems strange, no? It's simply refering to a French-Belgian-Quebecois cartoon which has had a good success in France: "les triplettes de Belleville" (2003) (Belleville is a popular district of Paris)... Bonneville? No need to explain I guess.


Let's be patriotic, it's not often that France is at the top when it comes to motorcycle.
But more than that, it's the story of those four pals that's amazing and how what you can imagine as a heavy drinking dinner challenge turned into such a big enterprise.

Those four guys decided to go to Bonneville Salt Flats, just for the curiosity and observe how things were going out there, with the idea to compete, but at another time....

That was the beginning, we were in 2007... But, what is after all not surprising when you know those characters, they got more and more involved in the challenge.
So, as it's decided to buy an airline ticket to go to Utah and as they got luggage with them, why not transport a machine, maybe not able to win but not ridiculous on the salt.... 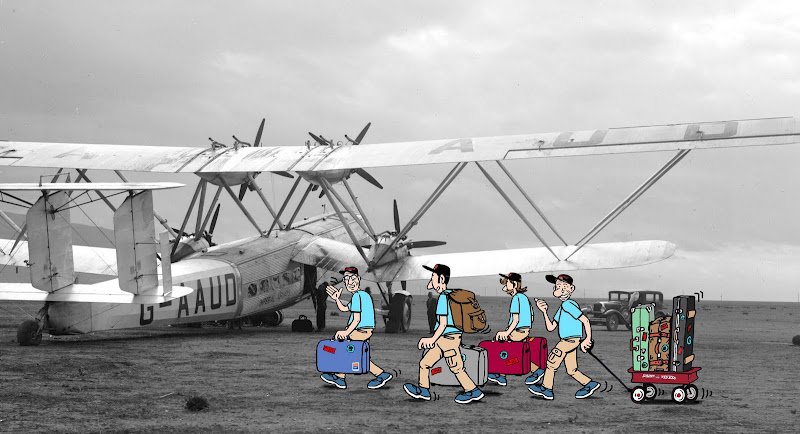 So what? A bike? A car? .... great idea but no money. So the machine has to be transported IN the suitcases, obvious. Funny but obvious. 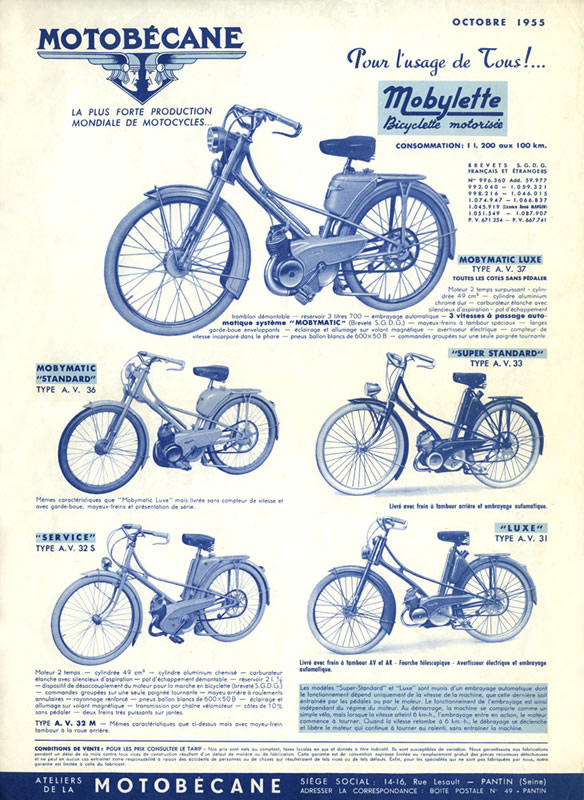 Then the good sized machine, available in France for a cheap price was a Mobylette.... very famous here, not very performant but famous, almost all workers were using that to go to Renault assembly lines in the post war period, millions of them have been sold in France . 49,9cc about 1.5hp max at 4000 rpm, max speed 45 km/h nothing to go to the moon with.... and nothing to beat records at Bonneville with either. 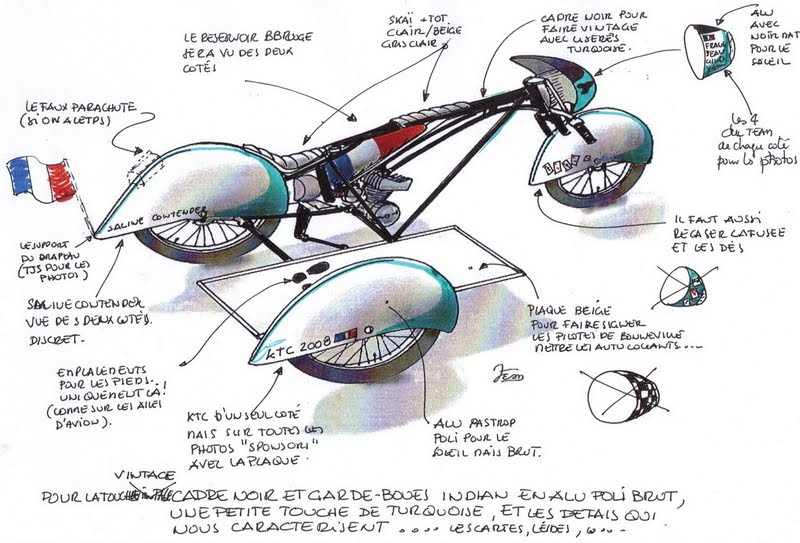 That's where our four musketeers began to take it more seriously "if we build something to go there, let's make it right".... here we go.
None of them was really acquainted with this two stroke engine.... they found Didier even though he was a skilled man, ready to help but too busy on other projects of less than 100cc bikes engines.... who finally completly transformed the performances and even build a second engine even more powerful, the first one being there as a spare then. 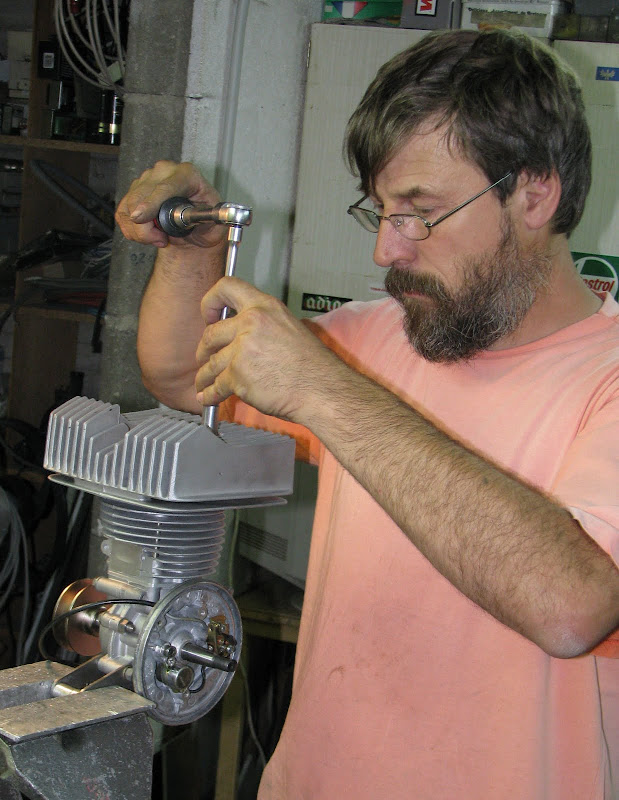 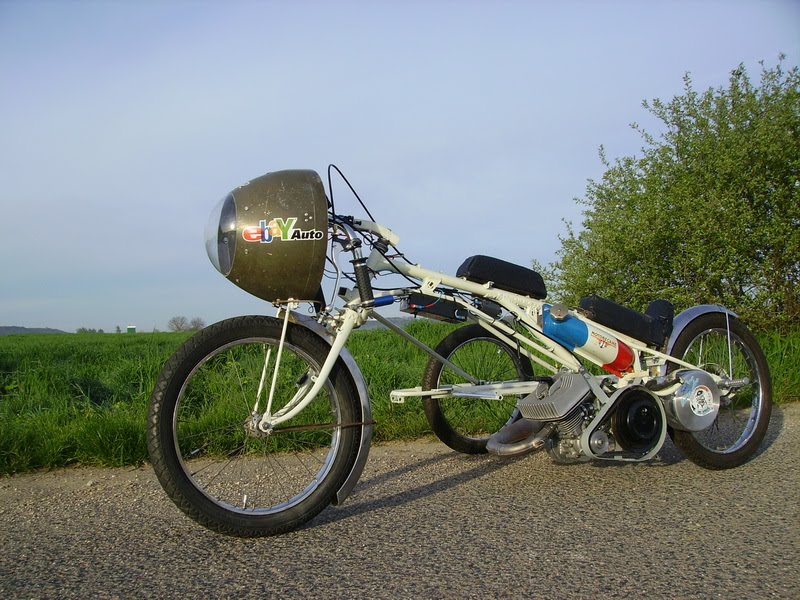 They transformed the cycle itself to be as low as possible, made different body works to fight air resistance and here they go. The frame can completly be disassembled to enter the suitcases... let's go to Wendover. 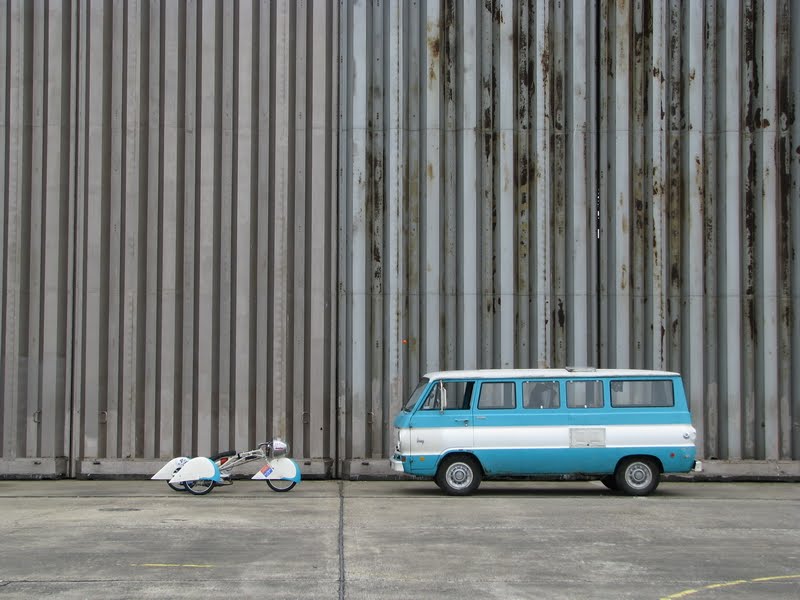 Imagine, four French guys opening their suitcases, there... on the salt, under the eyes of a multitude of wealthy and crafty american speedfans.... Everybody was astounded and they became the mascots of the 2008 speed week.

The machine called "Saline Contender" is a Motobécane Mobylette (pronounced MO-BE-LET) with a 49,9 cc 2-stroke engine. It can be a sidecar OR a solo bike. And it's a vintage one (before 1956).The job was so well done that it passed all the tests of the SCTA controls easily. 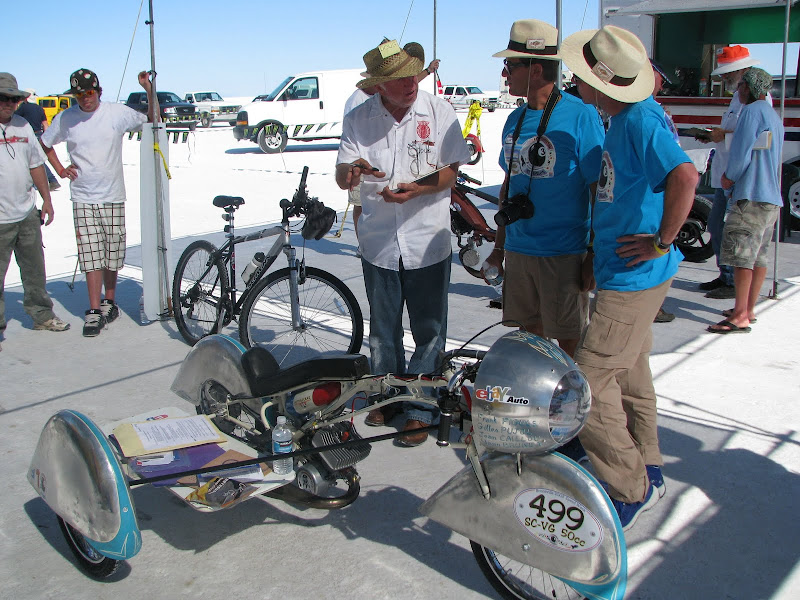 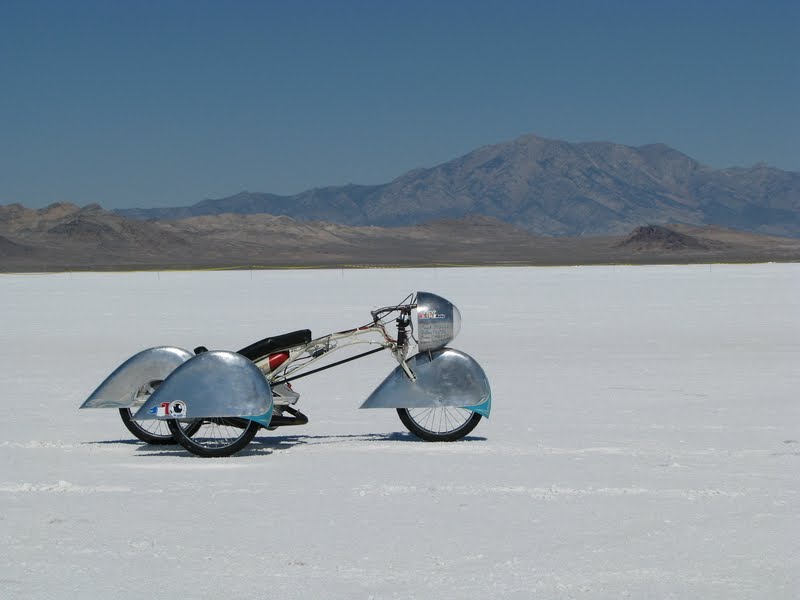 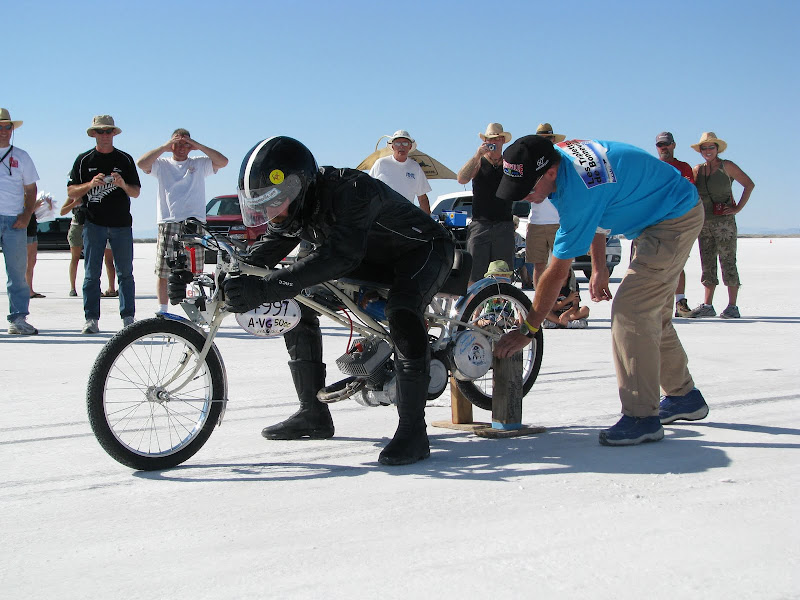 It runs on gasoline (120 octane as provided by the organisers) but the team also entered the bike in the 'fuel' class (in which you can use any mixture you want) just to double their chances to bring records back home. 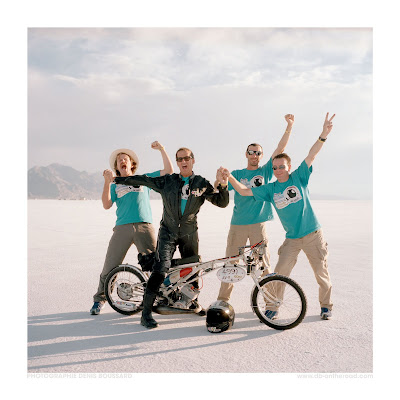 Hmmm.......Not bad for a machine initially designed to carry a 45 year-old worker from home to the factory and back,.... including the baguette and the bèret..... at an average speed of 35/40 kmh.

So.... they folded back the machine in their suitcases, the trophies and the bèrets too and flew back to France ready for another story.... 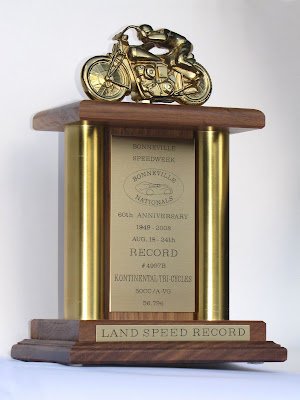 Cocoricooo (they are not rookies anymore but proud roosters)!
To be continued

Text by Elmo
thanks to Jean Caillou