Tuning of motorbikes is nothing like a recent fashion. At all times pilots, for their own needs, tried to improve the performances of engines and cycle itself .

Results were sometimes disappointing and rarely, like here, the work was a success, mechanically and aesthetically speaking.

This machine was born in 1922 in the creative brain of a pilot: Barthelemy, official shop keeper in Paris of the english brand ABC: "All British engineering Co", company created by engineer Granville Bradshaw and manufactured by the english plane maker Sopwith. 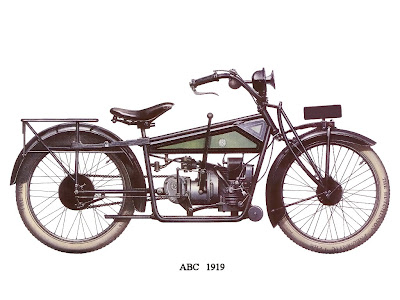 The ABC company became famous on tracks like Brooklands, with a 400 cc flat twin engine. Its capacity, between two categories, put it in the 500cc one, that is to say that its performances inferior in its category made it poorly competitive.

In France those bikes were manufactured by Gnome & Rhone, a french plane maker, which chose for post war restructuring reasons, to build ABC bikes before building its own. 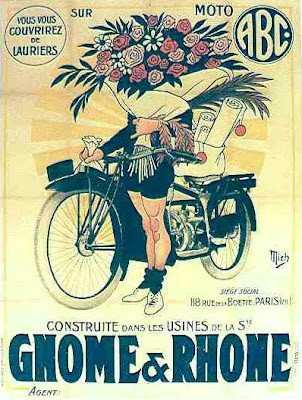 This was the departing point of the engine tuning of Barthelemy. Capacity increases to 500cc, the engine is equipped with a magneto and two carburettors. Timing and the rockers system are changed. Barthelemy add an oil radiator and oil filter for the engine had a tendency to overheat, which gave it the nickname " glow worm " for, at night it happened that the cylinders turned to red...

The engine was intially equipped with an electric starter and an air compressor which Barthelemy took off in order to lower the weight.

Then the real work began, Barthelemy built bronze cylinder heads with inner rockers on pin bearings, new cylinders were turned, news rods were forged at "home" and mounted on rolls.

The oil tank is placed in the front underneath the gas tank which improves cooling. The oil pump is changed for a big flow one.

The gear change of the ABC 4 speed gear-box is made by a long shifter throuph an H guide... like on the cars.

The cycle itself was soon improved, but rather with existing components: the frame and the fork are from a Gnome & Rhone D4, frame was just hardened by aluminium wales, the tank is from a Motobecane.

The present owner found this mix in a junk shop and retraced its history and after 4 years of restoration made it look like Barthelemy's realisation.

This is the kind of encounters you can make at the local swap meet. 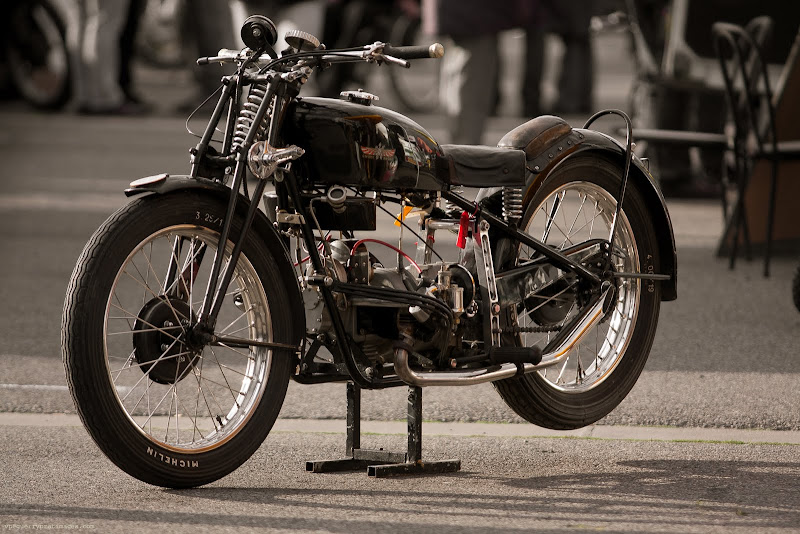 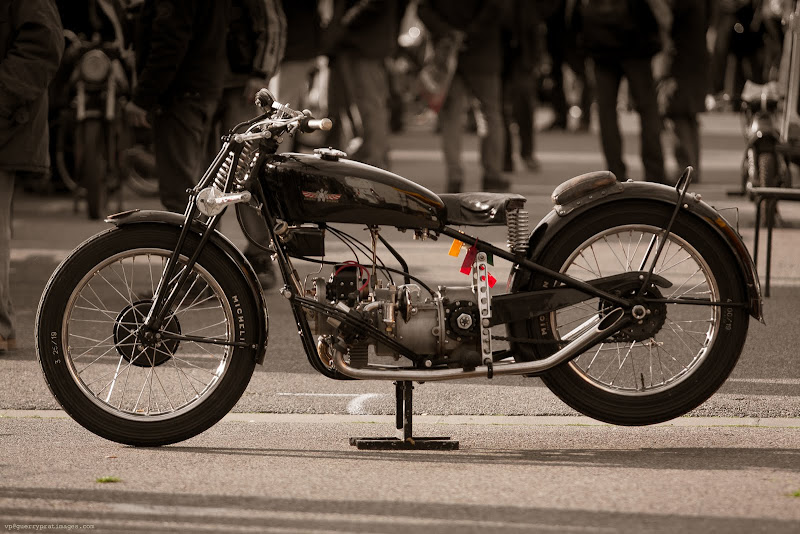 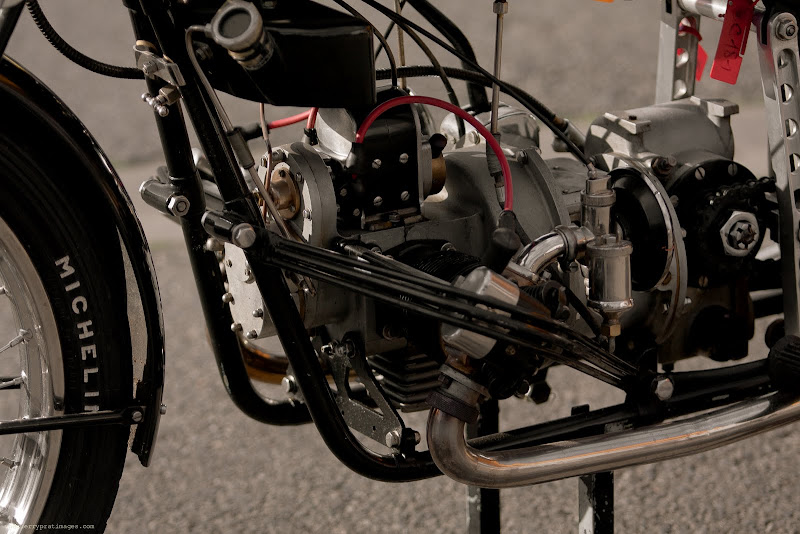 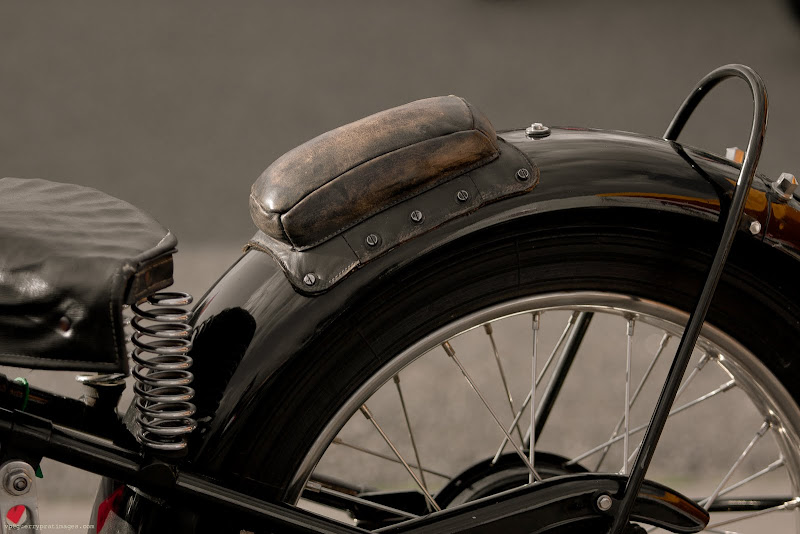 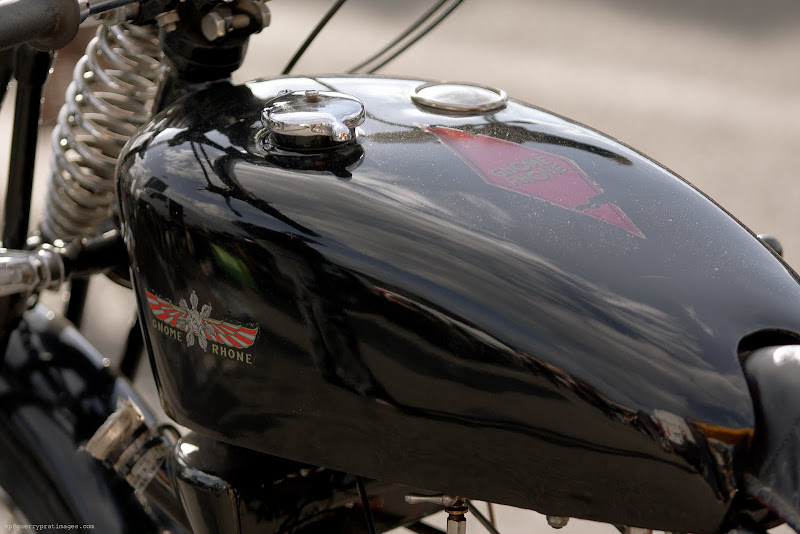 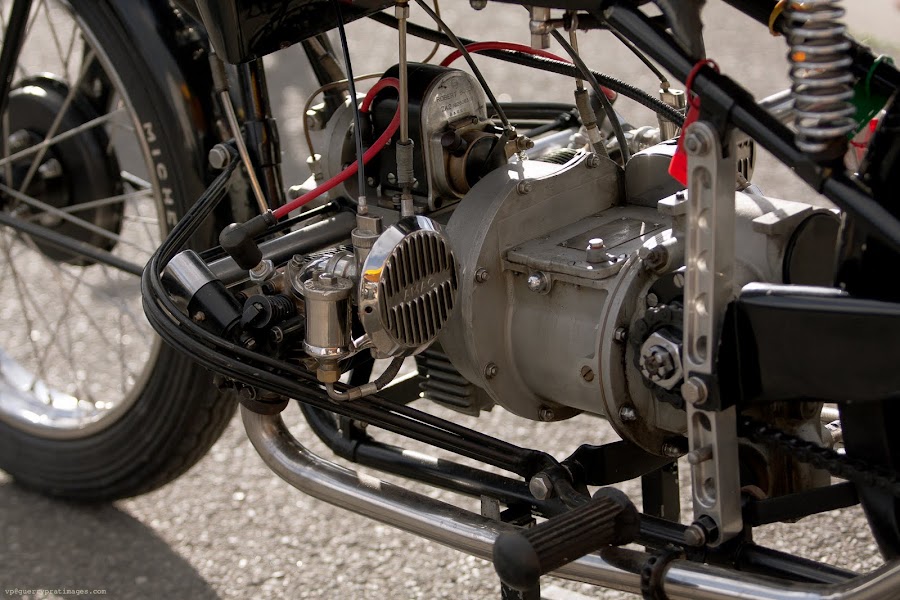 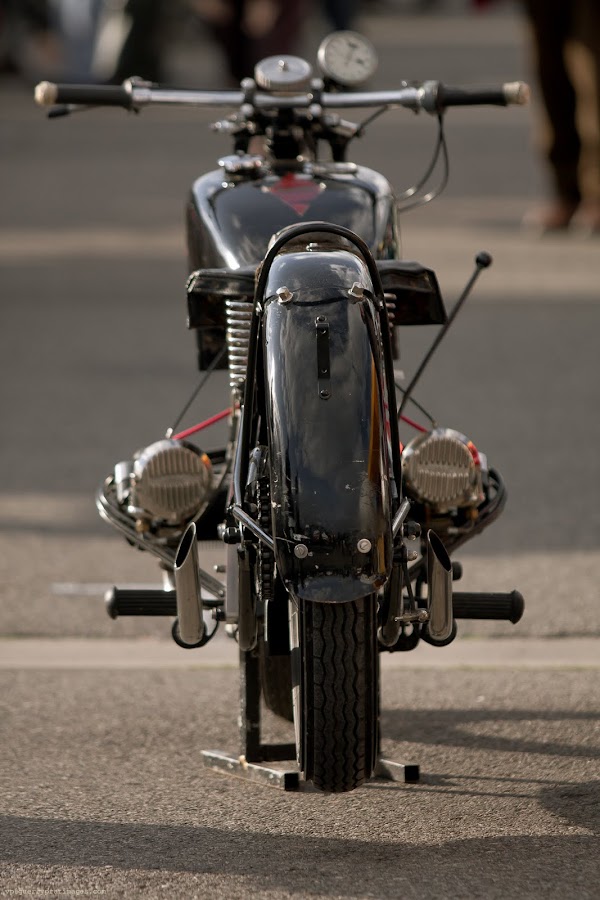 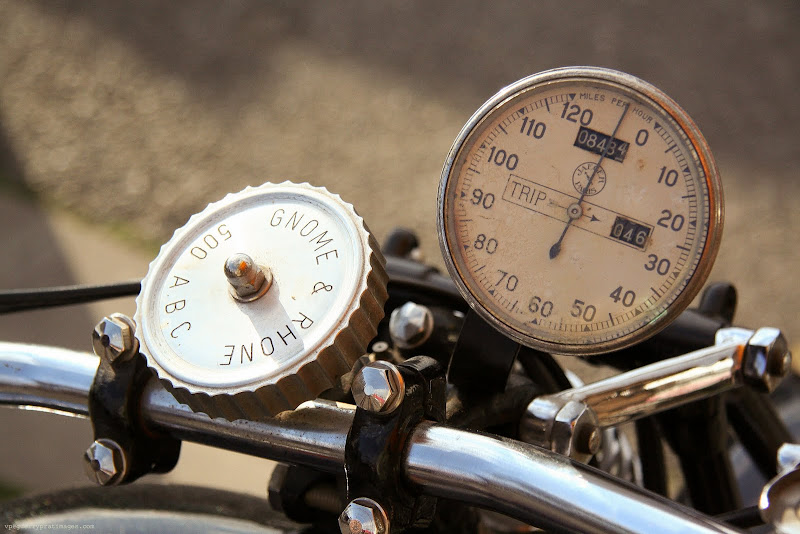 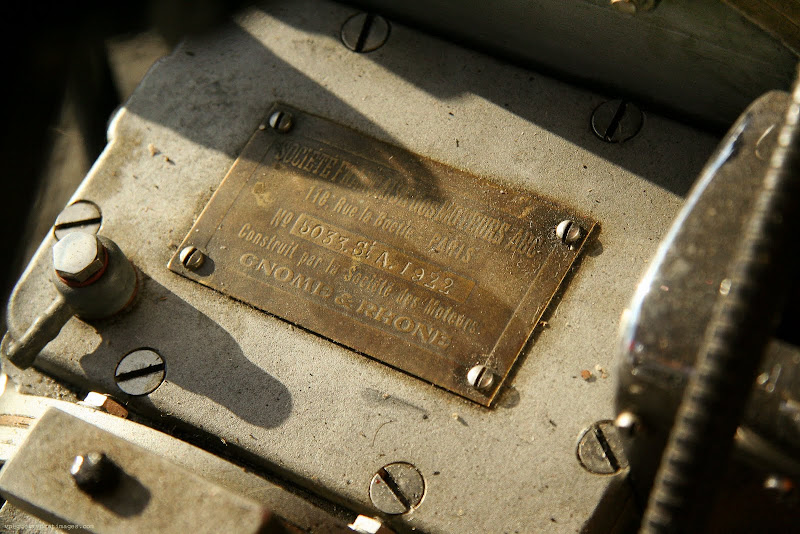 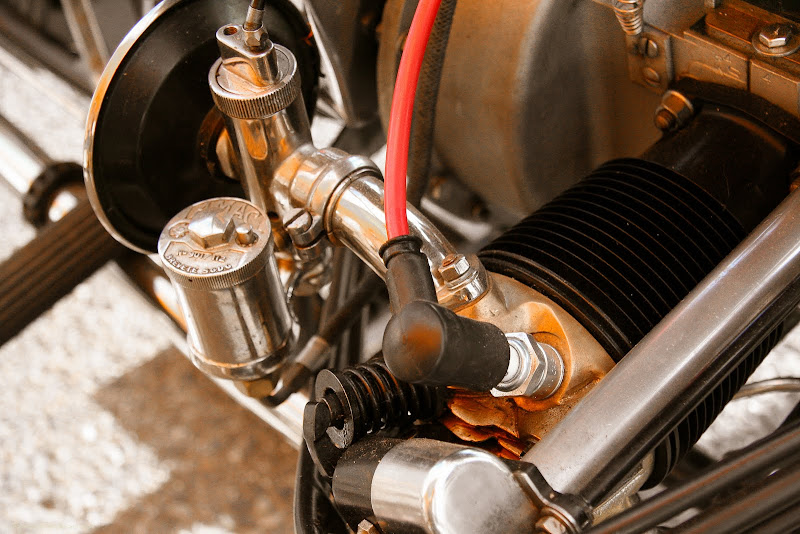 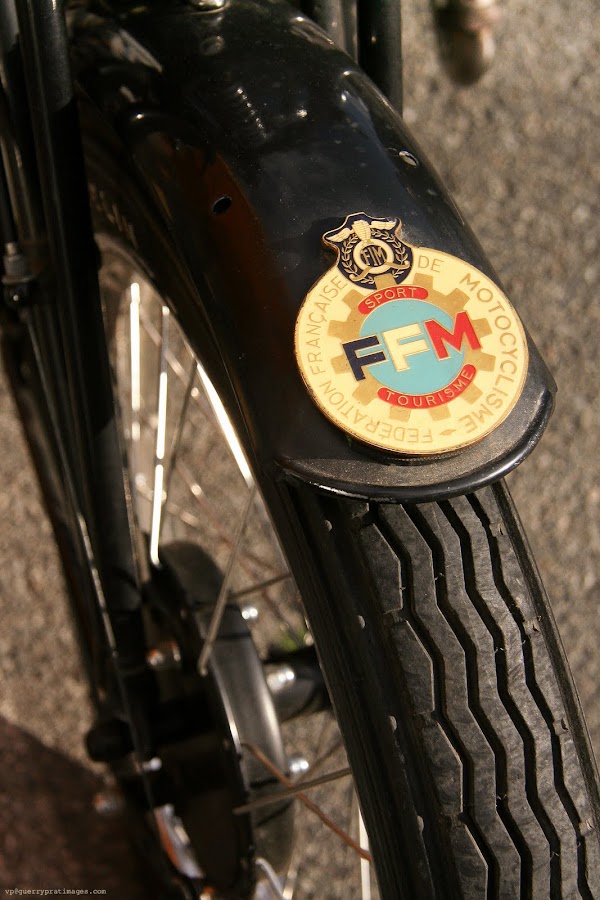 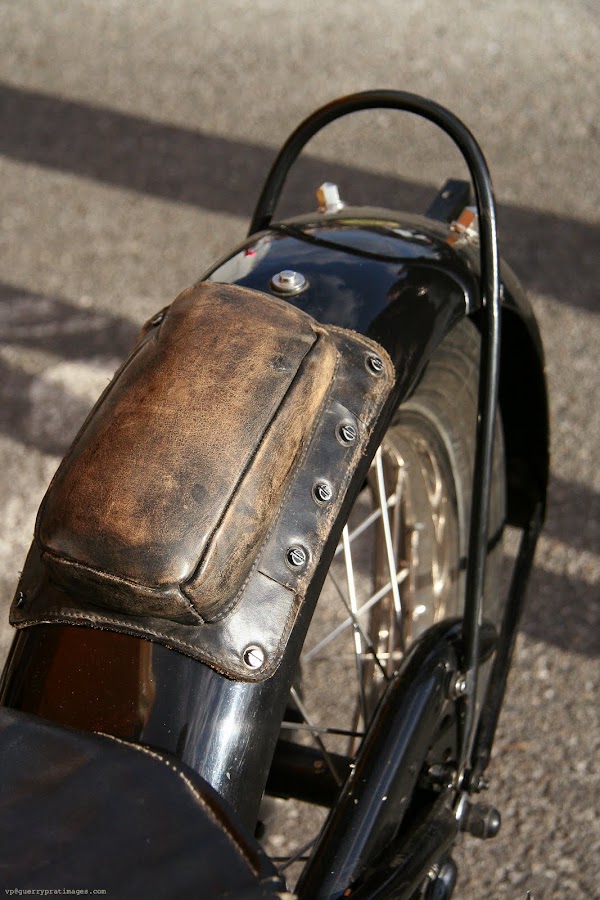 text: Thanks to Motos d'hier