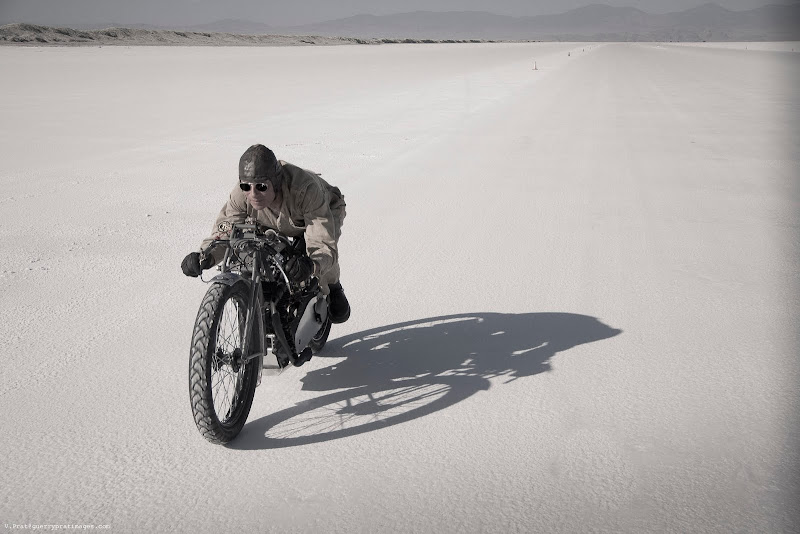 Bonneville... For thirty years I promised myself that one day I would experience it for myself, then a dream in December 2009 transported me to that mythical and magical place, to the heart of America’s passion for speed! The following morning Sylvie my life long companion and son Alan decided that in August 2010 we would finally make the long awaited voyage to Speed-Week, with of course the motorcycle that I constructed; the ‘Alan Speciale’. By chance it transpired that the journey would be in company with "La Rapide", a Paris based team. 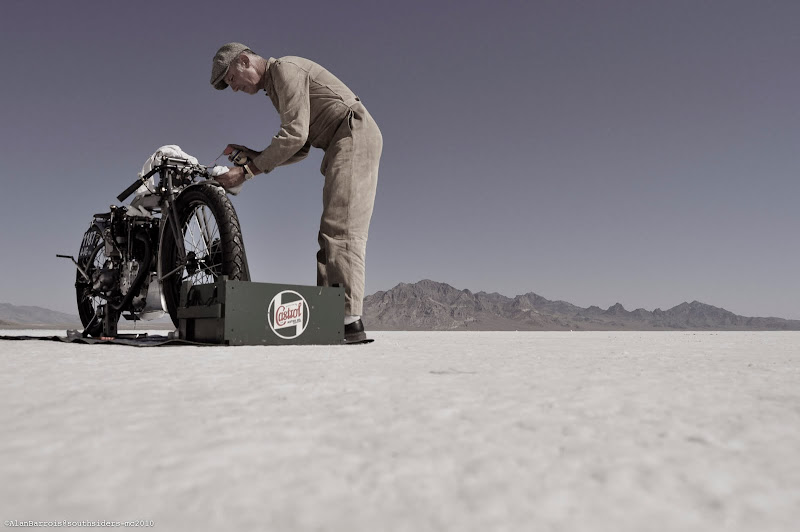 After some initial set backs we eventually arrived on the salt lakes, and so began a week full of incredible experiences. Firstly, my motorcycle and riders equipment had to be vetted by the BNI/SCTA scrutineers, and the guys were clearly fascinated by the age and design of my bike, in particular the engine! However a couple of things needed some on the spot modifications, my leather jacket and tousers required some additional popper rivets as the zippers fasterners were deemed insufficient. As for the bike, I had to produce a primary transmission cover out of a sheet of ally, easy said than done as my tin snips were 9000kms away back in my tool shed! 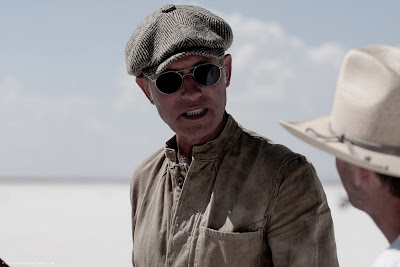 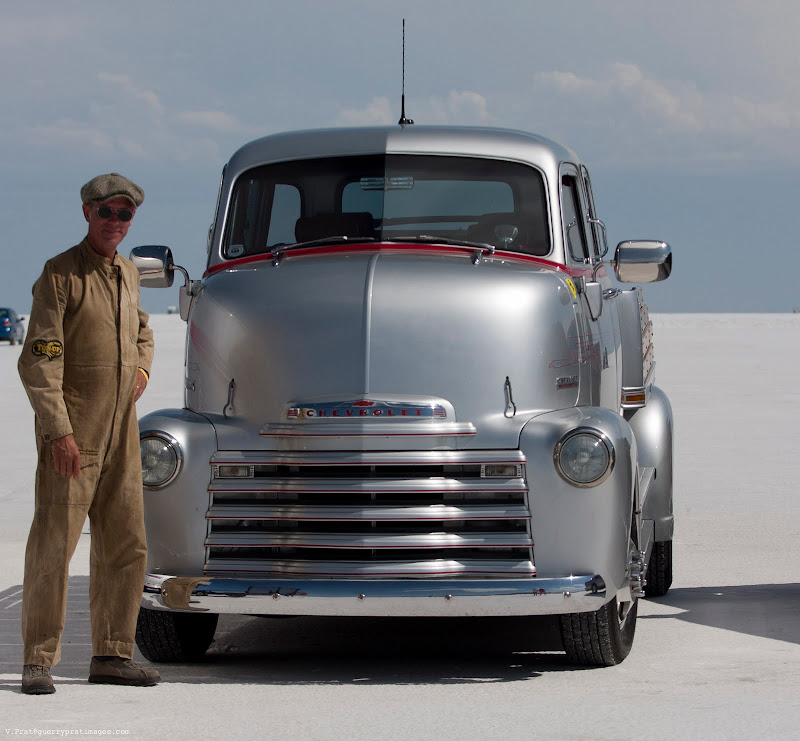 And then the long awaited moment finally arrived. Four hours awaiting my turn in the afternoon sun with temperatures running at 40 degrees in the shade, except there was no shade, and then there I was sat on the start line. A corridor marked out on an a sea of salt stretching as far as I could see, for a few moments at least, the long awaited Salt Lake belonged to one man... the Little Frenchy.


The starter Dean Spencer strolled over to me, tapped me reassuringly on the shoulder and said “cool man, no stress”. Dean checked all was ok to go before signing the ‘Rookie’ sticker on my helmet. Time to fire up the engine, while I concentrated on keeping the engine ticking over I asked Sylvie to select first gear the instant before commencing my run... I wanted to freeze frame that moment, savour the excitment and expectation, but the Alan Speciale and I could wait no longer.

Dean signalled me to close my visor and then gave me the green light in a simple and relaxed wave of his hand. I could feel my heart beating faster, the track markers flashed by one after the other while concentrating on keeping the bike upright and in a straight line, everything running normally and then the two mile marker at which point I shut of the gas and coasted towards the flags at Damiers breathing lungs full of air, stopped the engine and waited for the crew to arrive. An emotional reunion with Sylvie and Alan, at last an ambition fullfilled.

For a while I chatted with Rollie Free and Burt Monroe, one of many great moments. I retrieved my timing slips, a modest :55.232 miles, then back to the pits for an Ice cold Bud with our American friends. 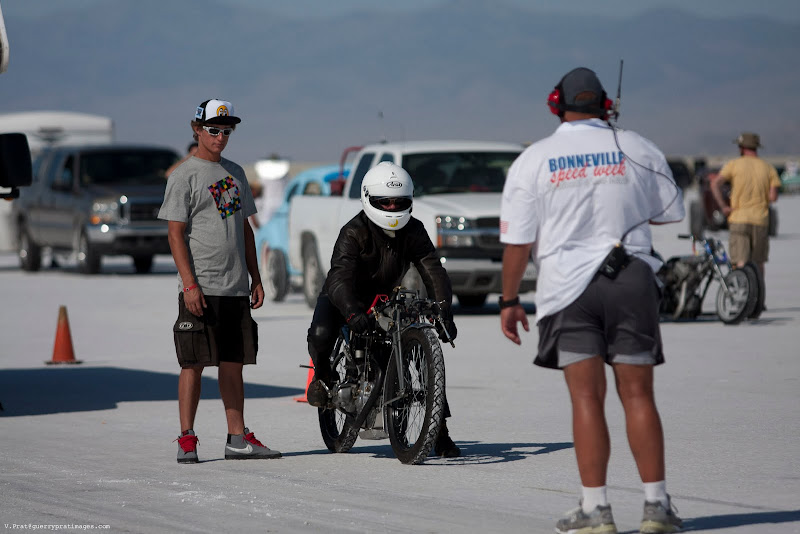 Father and son on start line 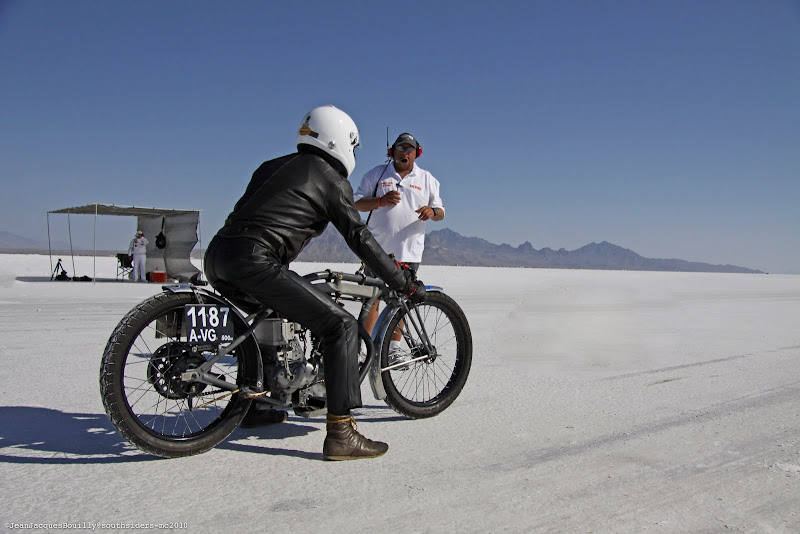 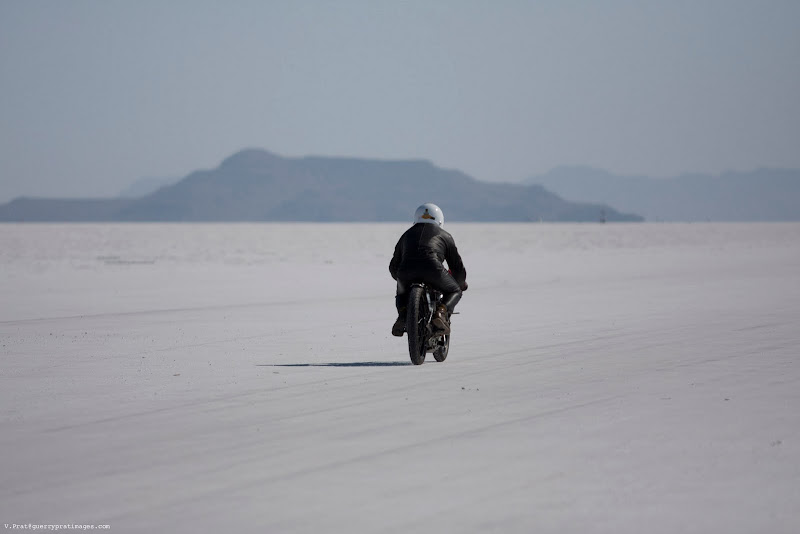 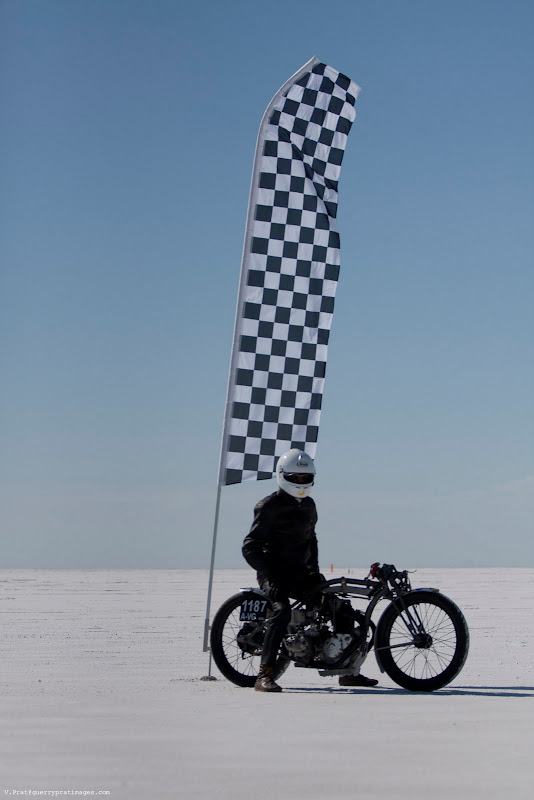 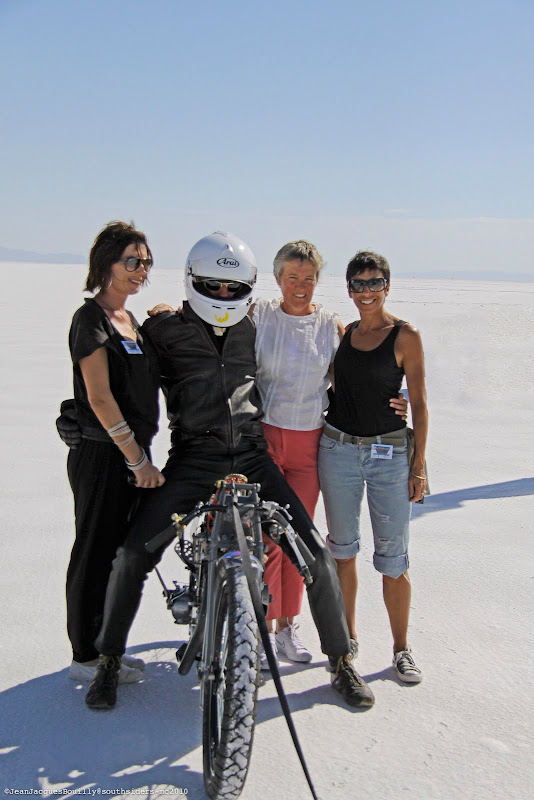 I had just three runs during the course of the week, to be expected as I hadn’t taken the time to make adjustments to the engine, which is afterall 80 years old. Furthermore I have just had the engine apart and found that the exhaust valve had an impromptu meeting with the piston head owing to a timing error, nothing too serious, but will require some attention. 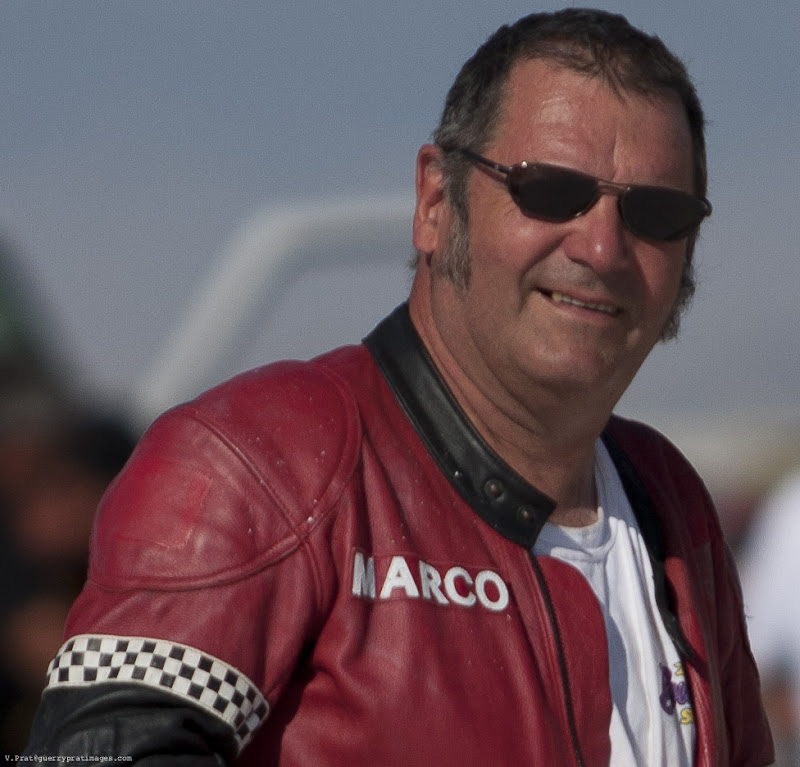 Thanks to Marco and his invaluable help with translation given that none of us speak a word of English, especially following an illegal dry run under the nose of the race organiser which almost cost us expulsion from the meeting!

Thanks also to Vincent for help with the administration and paperwork, also to TBC for the helmet. 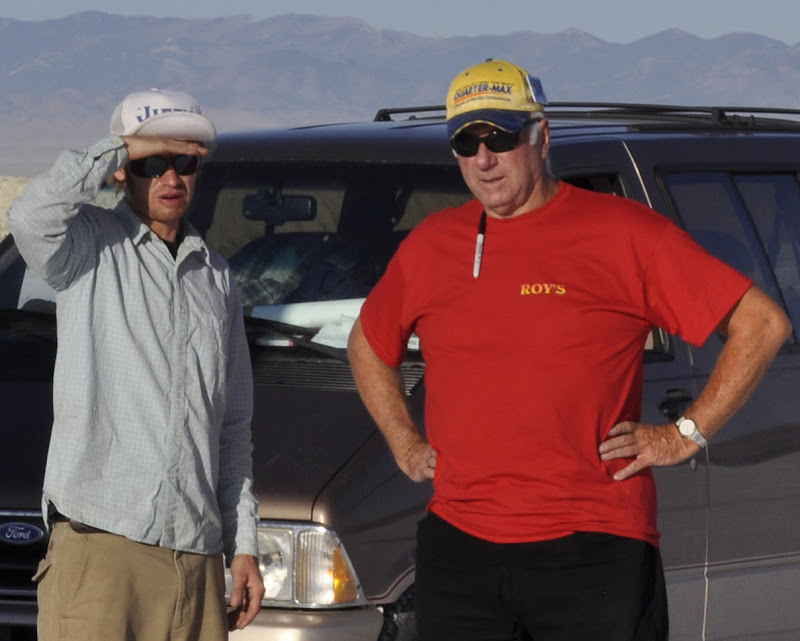 My appreciation to Homer, Ray, Bob and Larry for the bike transport back to the pits after each run and the bike wash. (cheers guys!)


Very special gratitude to all the voluntary helpers and the BNI/SCTA who since 1948 have through their dedication ensured that even novices like me can experience the thrill of Speed Week and the legendary salt flats. 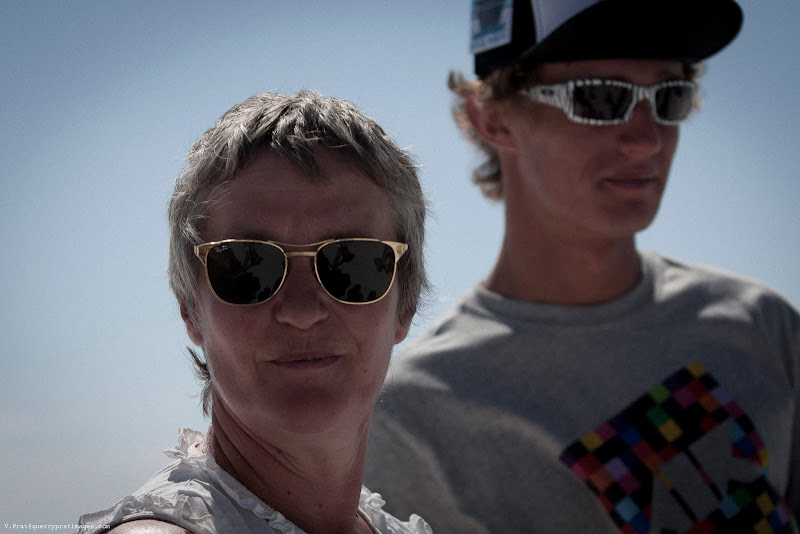 Last but most important of all, my sincere thanks to Sylvie and Alan without whom I would never have made it to Bonneville.


Be warned, once you have tasted the Salt, you will have to keep going back. Thats SALT FEVER! 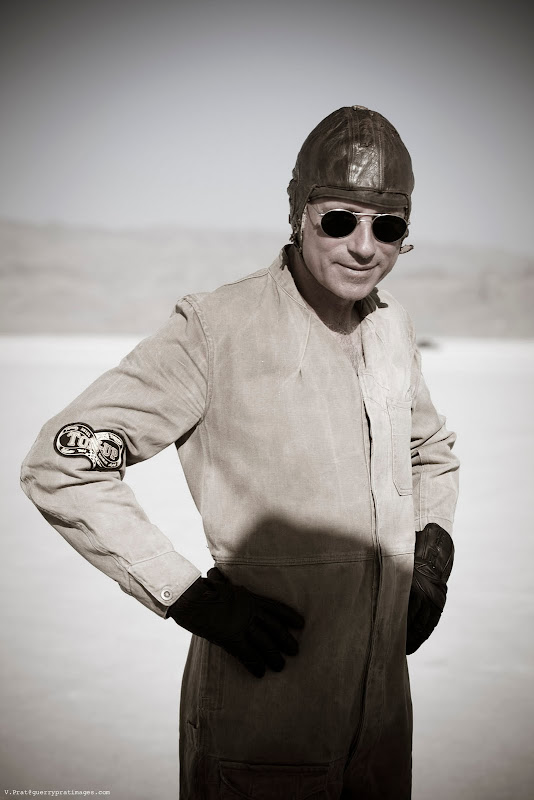 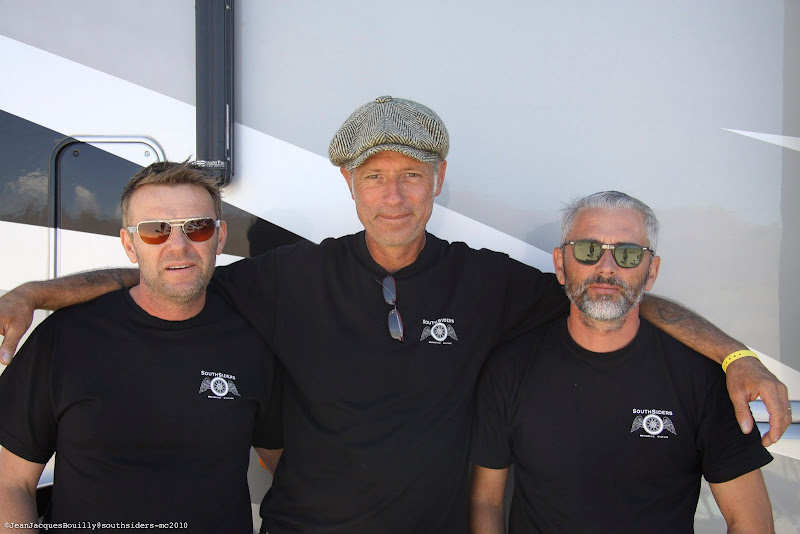 From left: Jean-Jacques, Jean Claude and me