David Lancaster is a journalist and lecturer, based in London. After studying philosophy at the University of Warwick, he spent three years as deputy editor of MotorCycle International magazine (published by BIKE founder, Mark Williams) before freelancing for Arena, BIKE, Classic Bike, and The Times, Independent and others.
He later founded the food, drink and travel title EatSoup for IPC Magazines and then launched Restaurant magazine. He rides his family's Vincent Black Prince, has sold too many old BMWs, and is road registering a Reed Titan Honda K4.

Scattered over England are numerous disused airfields. Further reductions in RAF spending may see more shutting down soon. They have a peculiar, elegiac charm: quiet, often deserted, with decaying wartime buildings, whose ghosts could tell of five years of wartime industry and danger as fighters, bombers, gliders even, were dispatched to be nervously counted back hours later by command and ground crew. 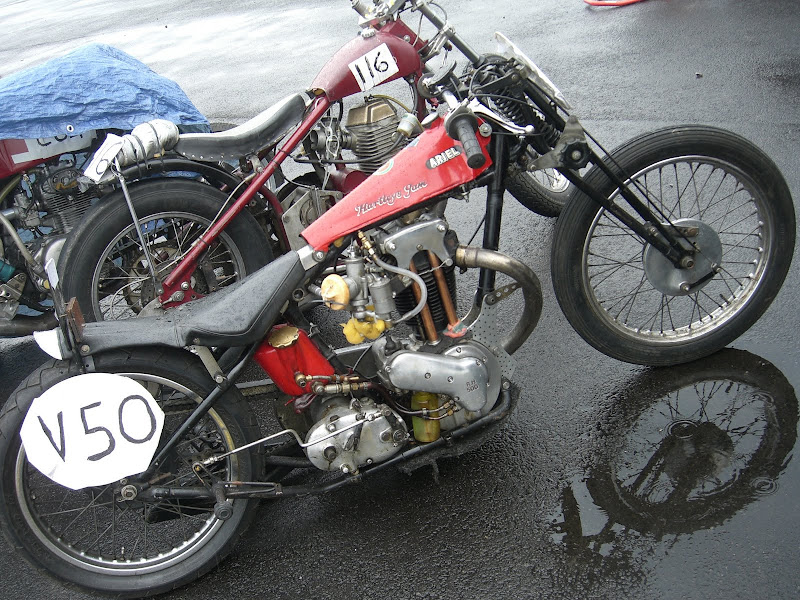 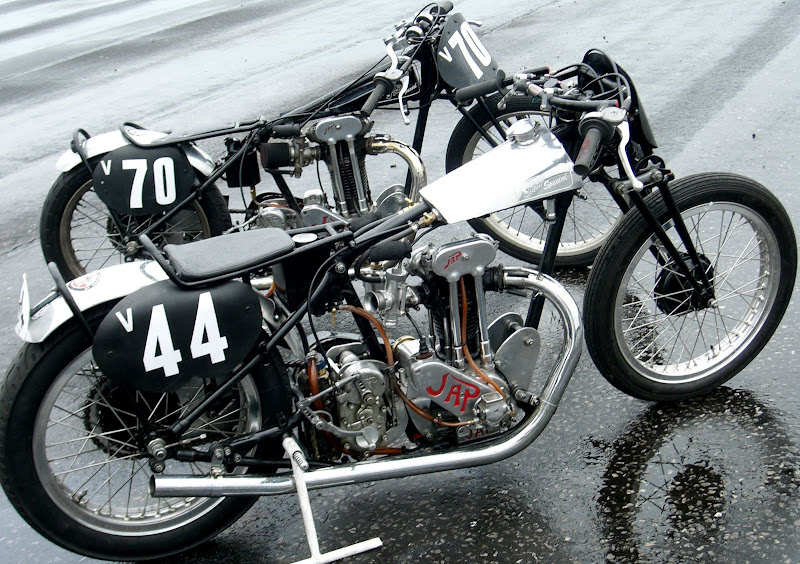 A few, still, have a life devoted to mechanical ingenuity and speed related endeavourer. Bruntingthorpe in the Midlands, is used for car and bike testing, and aircraft preservation. It was where I cut my teeth as a bike journalist in the late 80s, learning just how hard mph is to come by beyond 120mph. And when to brake on its two-mile runway. Removing the mirrors helped us crack 150mph on a Kawasaki ZXR750. 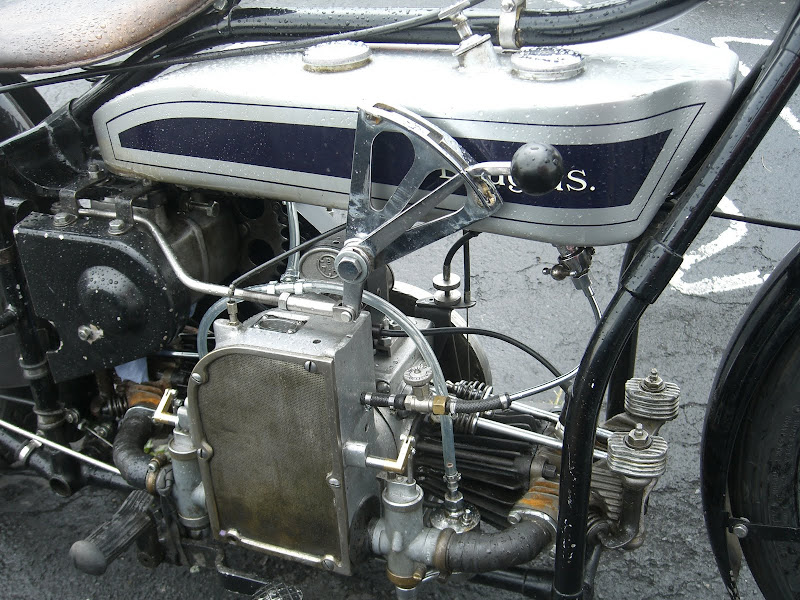 A few less industrious and high maintenance airfields host drag racing meetings from around May to October, organised by the National Sprint Association and supported by local clubs. The make-do-and-mend spirit is one wartime RAF pilots would recognise. Bikes range from the barely modified ‘run-what-you-brung’ machines, to highly tuned, leading edge racers, replete with anti-wheelie bars, turbos and hand-built frames. The vintage bikes have a compelling minimalism/brutalism to them: hard tails, often powered by large capacity V-twins, they strongly echo post war Stateside street style. 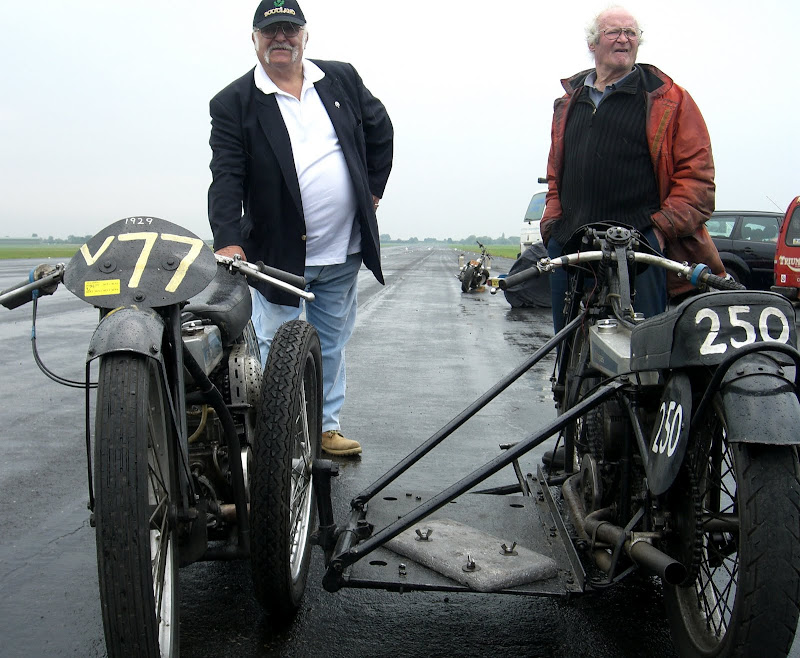 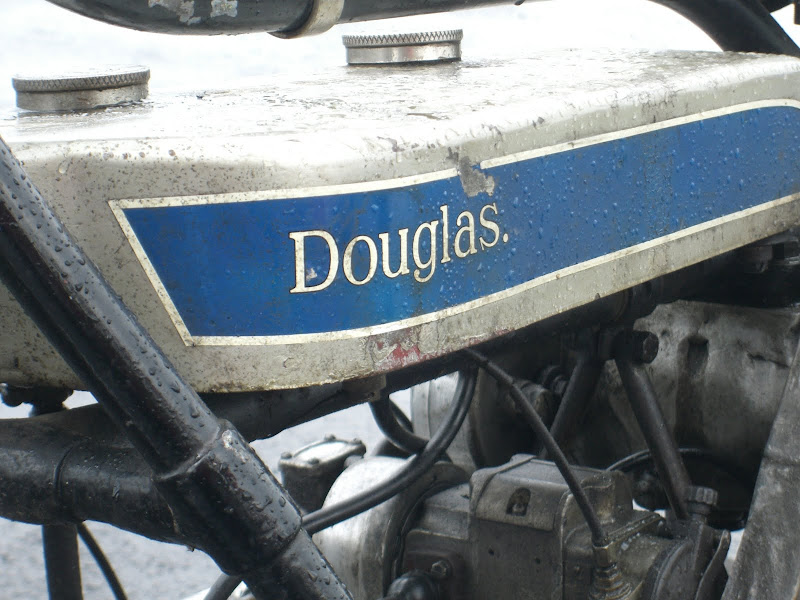 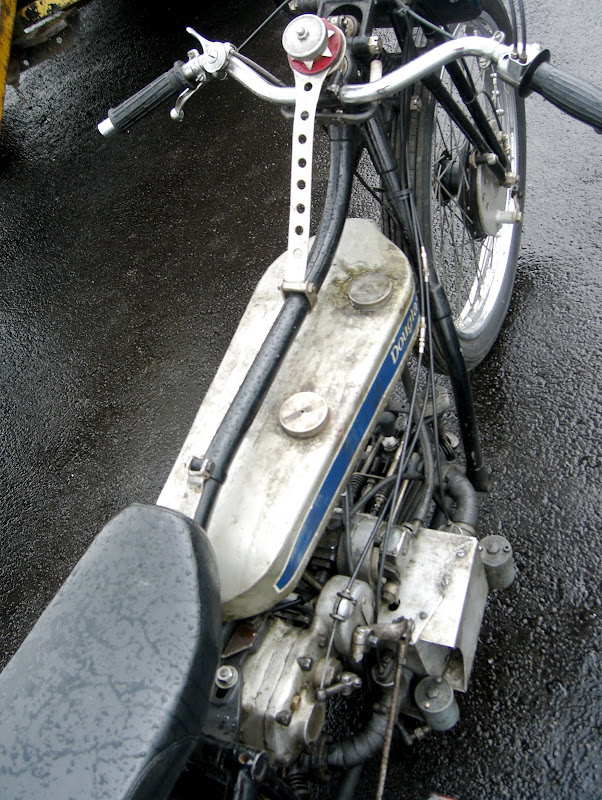 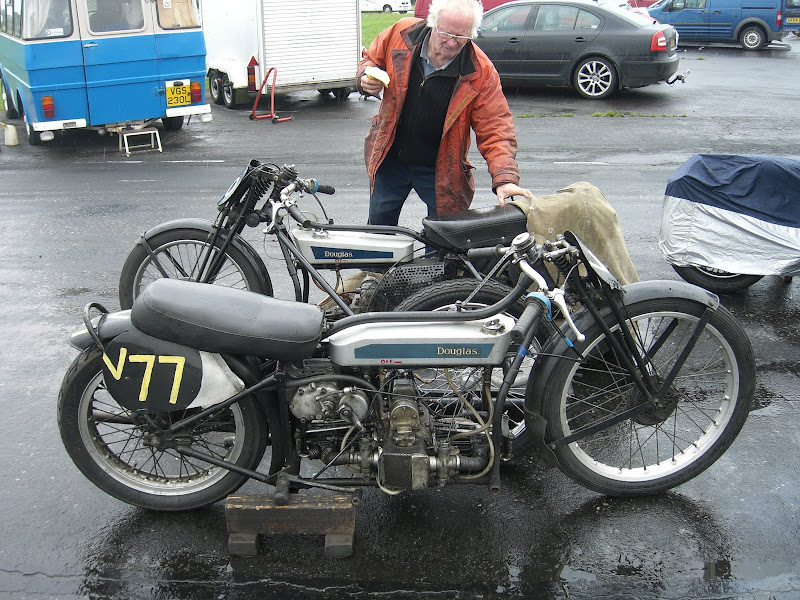 A drive to collect a Honda 350 K4 from its Manx owner led me to Keevil airfield, near Swindon, south of England, on a soaking wet autumn day. The Manx team’s members – the Lonan Gentlemens' Motorcycle Club - have near-dominated TT and Manx Grand Prix sprints for the past few years. The Honda I was collecting had won its class three years in a row. 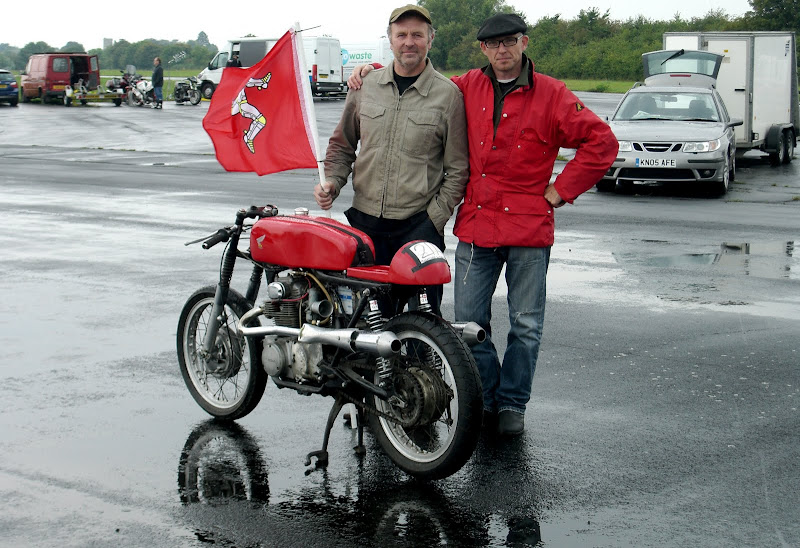 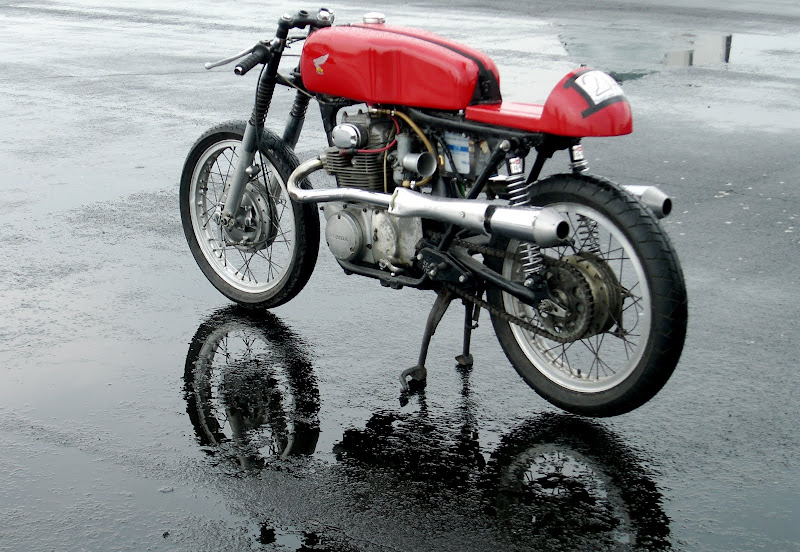 The team’s Paul ‘Hodgie’ Hogson would take his class fastest time (and course record) later that day at Keevil when the rain eventually eased, running 9.79 secs on his Yamaha FZR 500 based sprinter. He took the 250 class too, on a RG Suzuki based special. While the rain fell I took the chance to photograph and chat to the owners of some wonderful machinery. 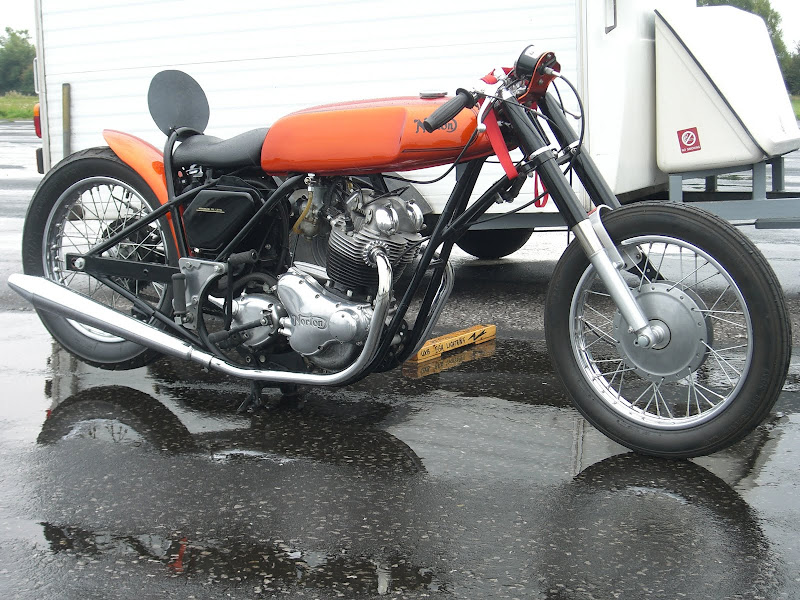 British Douglas’s were out in force, supported by the company founder’s great grandson, Bill Douglas, featured on the left of a shot here, with blazer and handlebar moustache. His family bikes were built not far from the airfield, in Bristol. Pictured with him is Henry Body, now in his 60th year of motorcycle competition, and still fast on his solo and sidecar-lugging Dougies, taking the best in the vintage sidecar and solo classes that day. 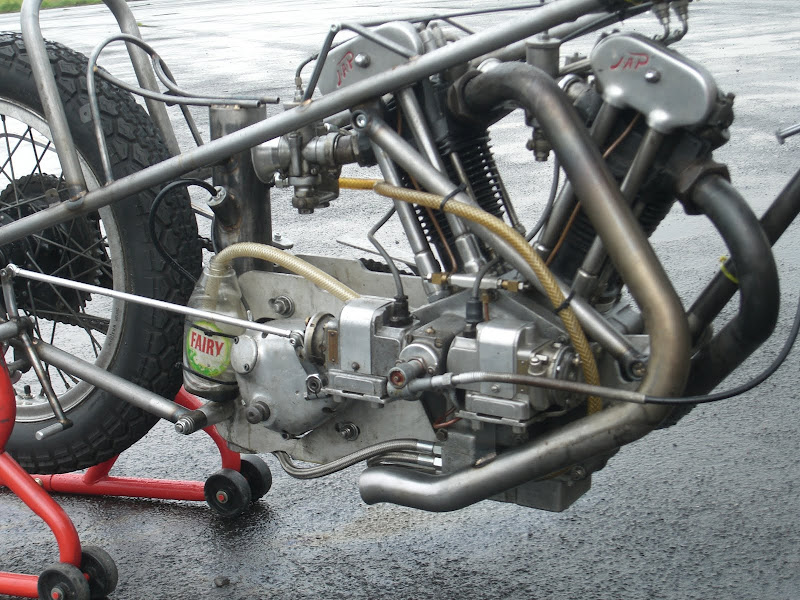 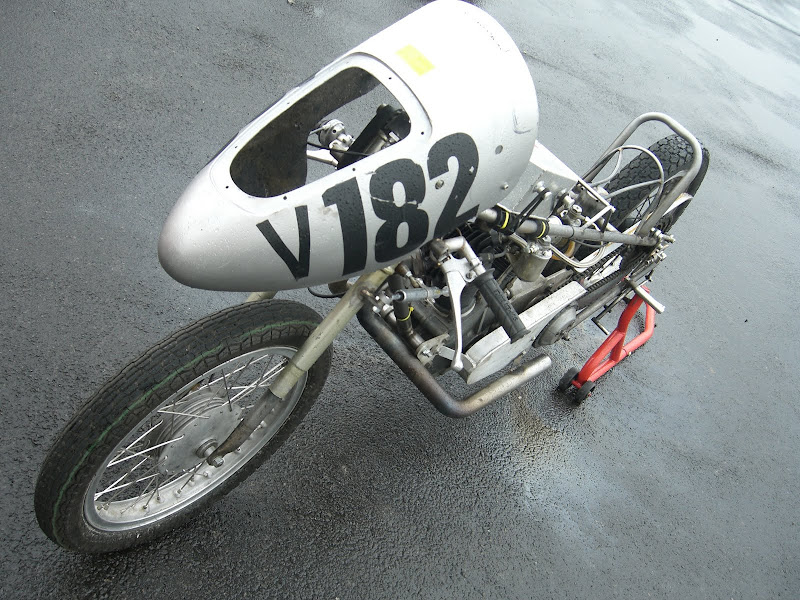 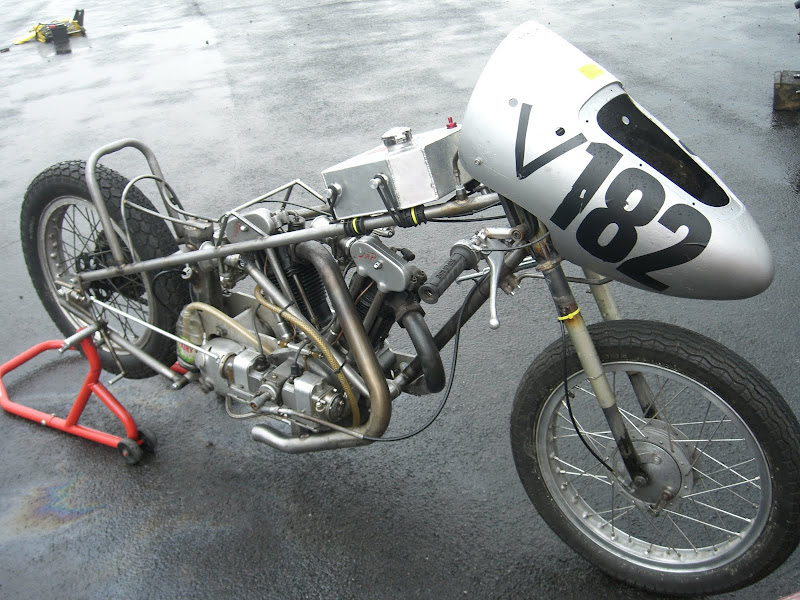 Jap engined-specials are popular with vintage sprinters; the units are ‘built to tune’ according to one rider. Yet others, such as the lad pictured, cut their teeth on tuned and stripped scooters, with kicked out forks. Keevil airfield itself played a key part in the war effort. It was built solely for the war, and was mostly out of use by 1947. Not only was it the launch pad for fighters, bombers and gliders, whose pilots would land in mainland Europe on secret missions, but Spitfires were built there too. In response to the successful German bombing of the south coast assembly plants, production was shifted to a new hanger at Keevil and by 1945 some 600 were dispatched. More info, with photos. 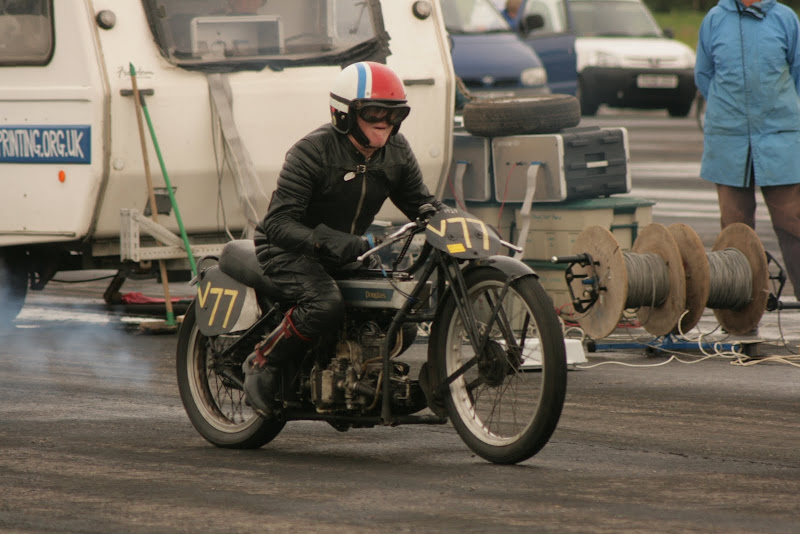 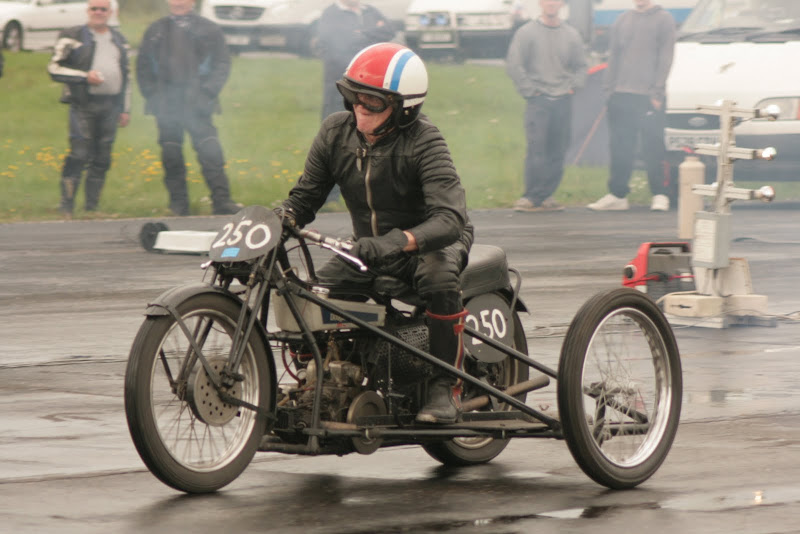 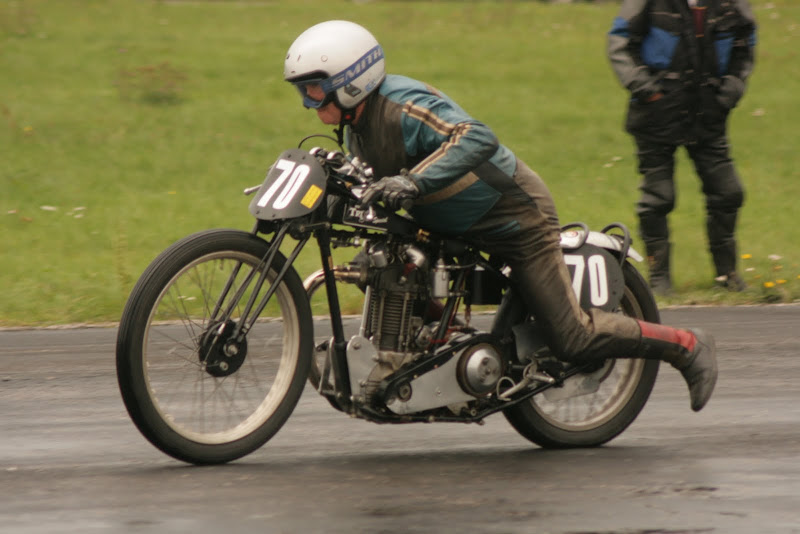 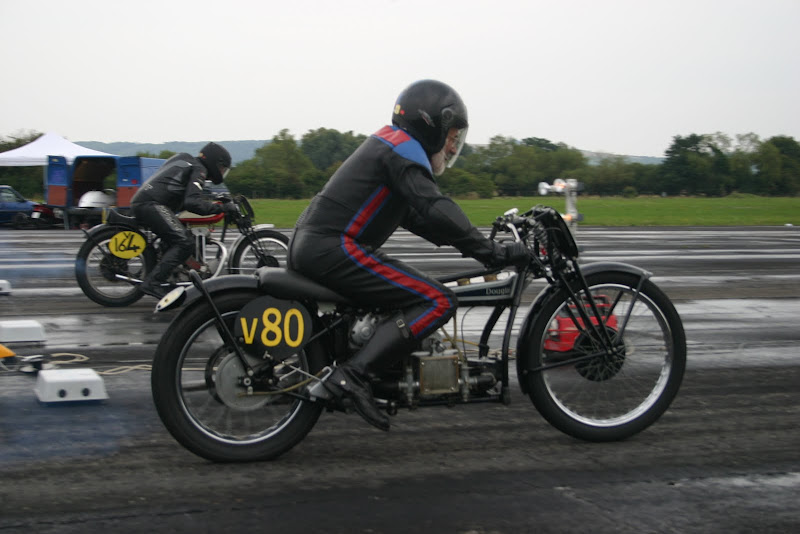 Action pics by Alan Turner
I came away more than happy with my new old Honda, and as ever impressed with this most subtle form of racing. Technique and split seconds matter – in the sprint time, of course, but more importantly in the launch. Just as appealing is, though, is the range of machines and the skills and depth of knowledge of the riders. And, at somewhere like Keevil, there is a sense of riding in the tyre marks of the RAF and USAF crews, launching themselves into the dark night heading toward mainland Europe, relying just as much as the sprinters on technique, skilled assembly, horsepower – and luck.