Paul d'Orléans is the absolute Connoisseur, a true historian. PdO knows all the machines, knows where to find the rarest pieces and owned himself more than 200 motorcycles. Paul D'Orléans is the one and only : the Vintagent. 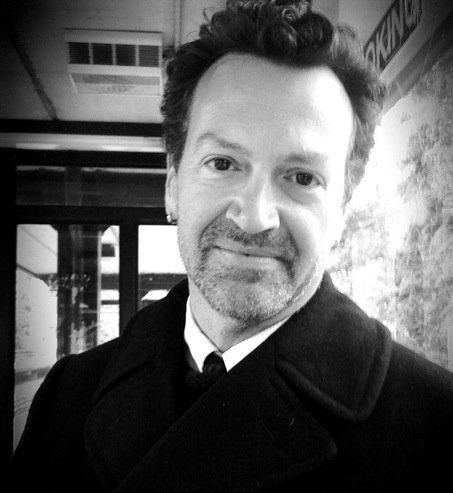 I was recently asked by the Southsiders M.C. to contribute to their novel website project, a series of 'Favorite 5' motorcycles of collectors, enthusiasts, and builders. One might think it difficult to determine such a short list from the endless stream of fantastic motorcycles through history, and it did take a bit of editing, but surprisingly little actually. My criteria are strictly personal, no claims are made that these are the best, most important, technically innovative, or beautiful bikes Ever. But to me, they are the most compelling of all, and I will never own any of them (well, the Guzzi is possible, although fakes are rampant). In chronological order: 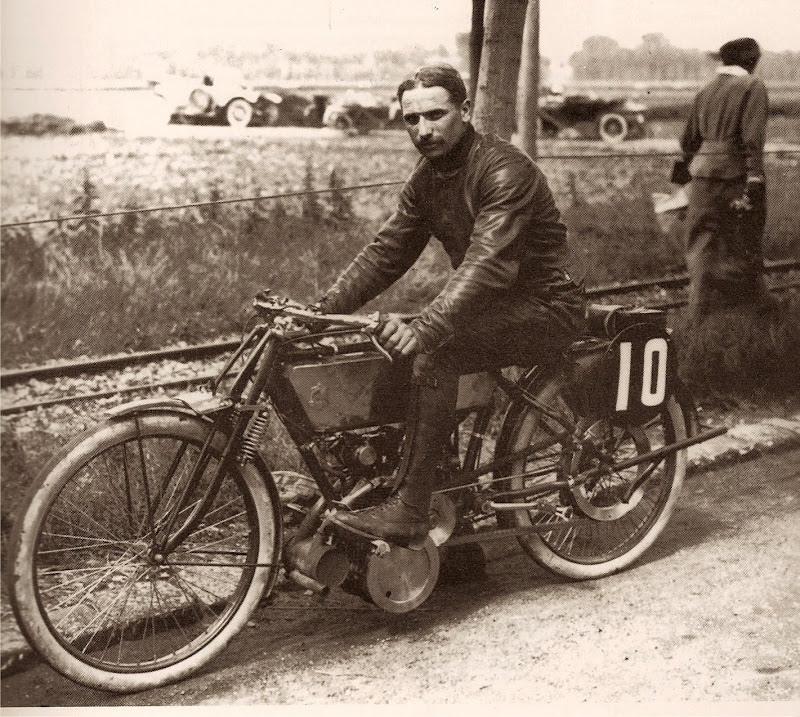 1. 1914 Peugeot M500 dohc twin-cylinder, 500cc
In an era when most motorcycles had no brakes and atmospheric inlet valves, when horses were more common than powered vehicles, when paved roads were very rare, Peugeot delivered a machine with technical specification from outer space; a parallel twin with gear-driven double overhead camshafts. Astounding, shocking and not a one-off; they continued to develop this machine for racing until 1920, when the original Ernest Henry design was revamped with gears alongside the engine (which greatly simplified maintenance) and a 3-speed gearbox. None of these early machines have survived. 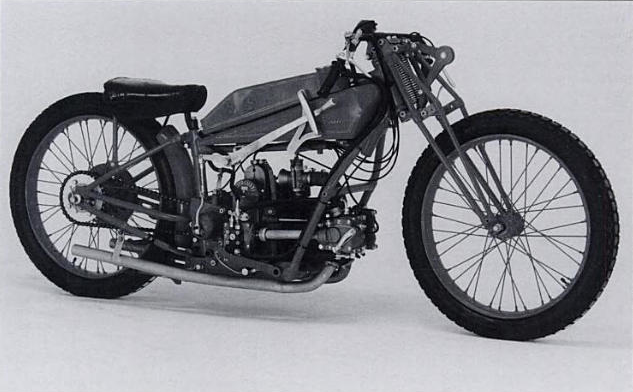 2. 1925 Moto Guzzi C4V 500cc ohc
The very first Guzzi built in 1920 was an ohc machine, the GP1 (Guzzi/Parodi, the designers), and in 1924 the overhead-cam laid down single cylinder engine returned as a purpose-built racer, the Corsa Quattro Valvole ('racing 4 valve'), using shaft-and-bevel drive to the single ohc. Winning the European championship first time out, the C4V was good for near 100mph, and development gave 32hp. Guzzi produced the machine in small numbers, and it's my favorite flat-tank motorcycle, period, looking fast from any angle. 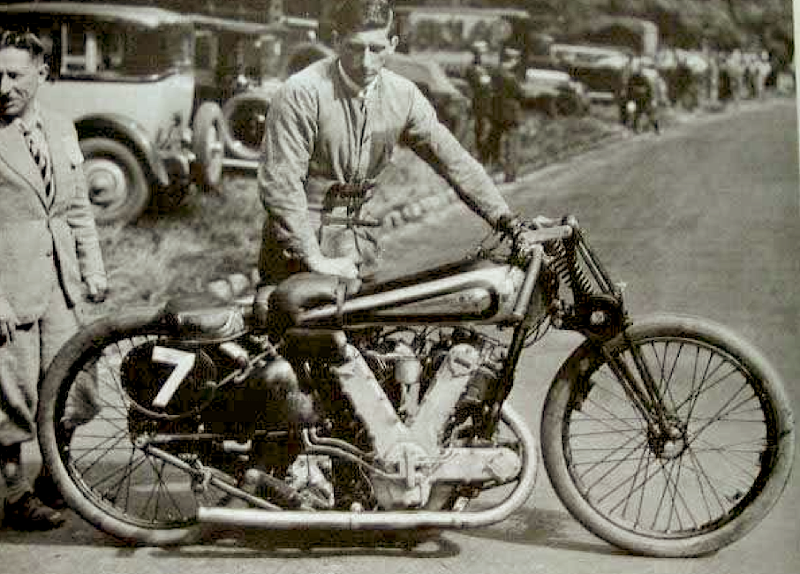 3. 1929 AJS ohc v-twin, 990cc
Built for an attempt at the Motorcycle Land Speed Record, AJS used two of their 'K' series top ends with chain-driven single ohc, on a common crankcase, with a third chain drive to the magneto at the front of the engine. By integrating all 3 chains thus, they created a truly dreamy powerplant; visually balanced, with more than a hint of technical finesse. The long tapered tank and otherwise spindly 1920s running gear make this bike one of my all-time favorites. It made 130mph, not quite fast enough, and was developed further in 1933 with a supercharger, which added serious machismo, but lost the delicate beauty of the original. The bike lives in the National Motorcycle Museum in England now. 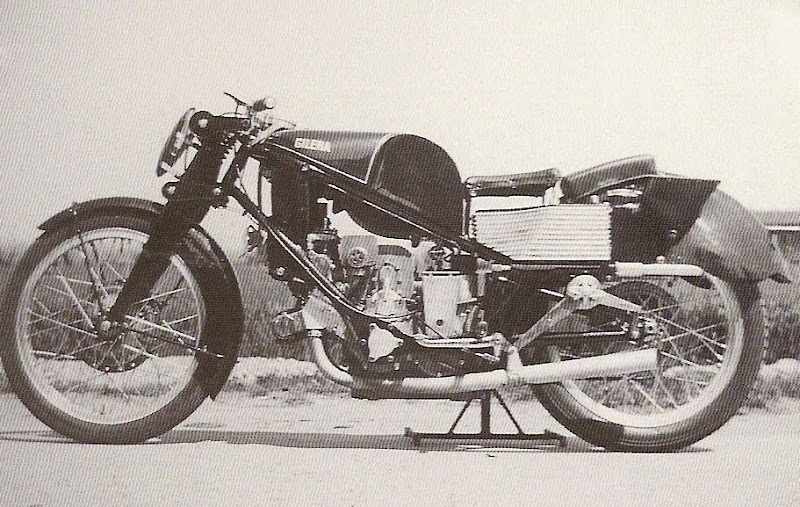 4. 1934 CNA/Rondine supercharged, watercooled, dohc 4-cyl 500cc
The bloodline of this amazing four-cylinder racer start in 1922, with a sohc air-cooled four, designed by Carlo Gianini and Piero Remor, under the GRB name. The basic machine was developed over the next 35 years, changing ownership via OPRA and Rondine, eventually becoming the world-championship Gilera Four postwar. This watercooled and supercharged version was designed in '33 by Gianini and Piero Taruffi, produced 60hp @ 8500rpm, and won races immediately at the Tripoli GP, and took the flying mile World Speed Record for 500cc at 152mph. The atypical design solutions for laying out engine, frame, cooling, and suspension make for a futuristic vision of Motorcycling, even though this particular dream died out with WW2. 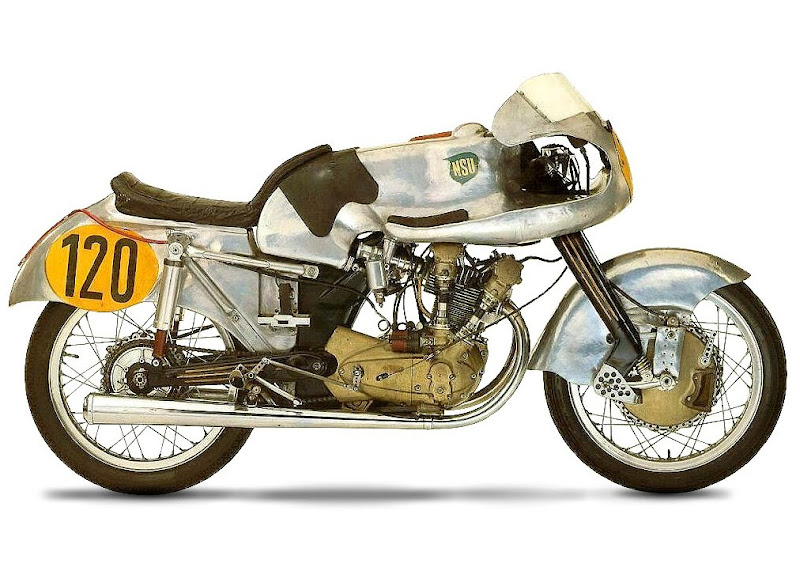 5. 1952 NSU Rennmax 250cc dohc twin.
While NSU experimented with two and four-cylinder racers pre- and post-war, with variable success, it all came together in 1953 with the Rennmax, which came to completely dominate 250cc GP racing in the next few years. Designed by Ewald Praxl and Walter Froede, the engine developed 36.8hp at 11.2k rpm, good for 131mph, and weighed only 117kg (270lbs). Its performance was astounding in the day, with utter reliability. The design of the shaft-and-bevel dohc twin-cylinder engine in its modified roadster pressed-steel frame is impeccable, while the hand-hammered aluminum bodywork is breathtakingly beautiful, the absolute pinnacle of the era.


all the best, Paul


Nice selection Paul, I agree with you, the NSU and the Peugeot are real masterpieces...
Hey, you liked that? send me your selection and rendez-vous next week !