.
The first time i met Patrick it was in Biarritz at the Bar Jean for the "apéro" he was there with his girlfriend and the main feeling i had and still have today is that this guy is full of energy regardless if it is positive or negative but the second and most important point is that he is a real Guy, nice and tough at the same time.
Frank 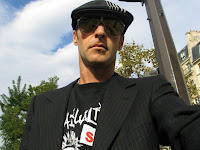 "who the fuck is Patrick Cariou?
As far as i can see he's a little part of you and even bigger part of part of me...A rude boy. An outlaw. A rebel. An artist. A phototographer and a tortured soul. One minute he's fine, the next he's out of control. to the crew, he was something else. the thought he belonged locked up in the zoo. but in is defence, i got his fear, his angst and his truth. All those so concerned should look at their lives and then we'll see who's who."
Danny "boy" O' Connor

Patrick has traveled the globe, from the North Shore to Peru, from Tahiti to Brittany, tram Long Island to Easter Island, searching out net only the world's great living surfers and legends, but also the dedicated, unsung wave riders living on and surfing distant shores and out-of-the-way breaks the world over.

With a penchant for adventure, is it no wonder photographer Patrick Cariou journeyed to Jamaica, a land that he calls "pure madness, and one of the most dangerous places on earth that is not at war." There he entered the secluded world of the Rastafarians, a world, culture, and religion closed to outsiders. Cariou slowly gained their trust, and they began to let him take their picture. With bold black-and-white portraits and landscapes, Cariou indelibly captured the strict, separatist, jungle-dwelling, fruit-of-the-land lifestyle--popularized by reggae legends Bob Marley, Peter Tosh, and Burning Spear-in never-before--seen images, until now.

Cariou has been living in New York for nine years and since then his passion for photographic culture and photo books has endlessly intensified. He embraces everything universal about photography.

His love for style and the youth culture, accompanied by his constant search of the truth, is not only found in his fashion photographies, but also in the portraits he pictures and the choice of his subjects. Cariou’s selection of themes and subjects is far from being neutral; his view is piercing, incriminating and fairly proud towards the injustices and realities of our time.