The Type 950 Vanguard was a British short/medium-range turboprop airliner introduced in 1959 by Vickers-Armstrongs, a development of their successful Viscount design with considerably more internal room. The Vanguard was introduced just before the first of the large jet-powered airliners, and was largely ignored by the market. Only 44 were built, ordered by Trans-Canada Airlines (TCA) and British European Airways (BEA).

The Hawker Siddeley HS.121 Trident, or DH.121, was a British short/medium-range three-engined airliner designed by de Havilland in the 1950s, and built by Hawker Siddeley Aviation in the 1960s, after the former became part of that group in 1960. Designed to a British European Airways (BEA) requirement, it sold in small numbers, with 117 produced.

The Bendix RIM-8 Talos was a long-range naval surface-to-air missile, and was among the earliest surface-to-air missiles to equip United States Navy ships. The Talos used radar beam riding for guidance to the vicinity of its target, and semiactive radar homing (SARH) for terminal guidance. The characteristic array of four antennas surrounding the nose are the SARH receivers which functioned as a continuous wave interferometer. Thrust was provided by a solid rocket booster for initial launch and a Bendix ramjet for flight to target with the warhead doubling as the ramjet's compressor. 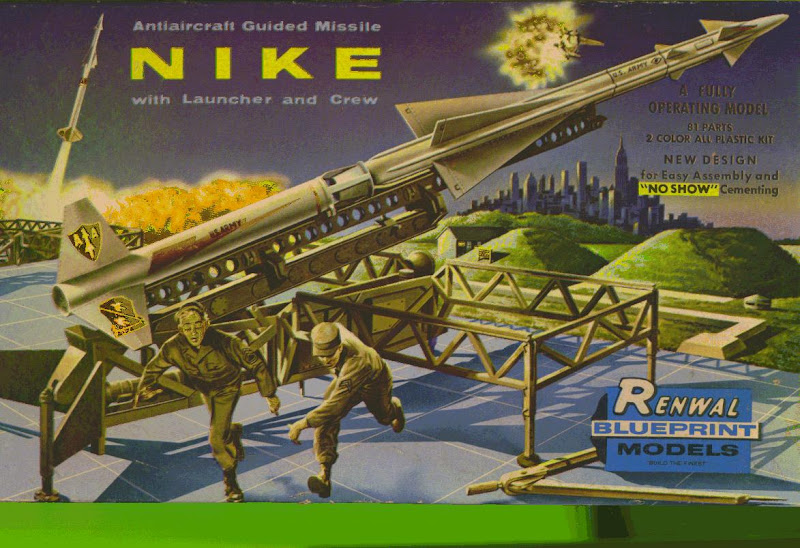 Project Nike was a U.S. Army project, proposed in May 1945 by Bell Laboratories, to develop a line-of-sight anti-aircraft missile system. The project delivered the United States' first operational anti-aircraft missile system during 1953, the Nike Ajax. A great number of the technologies and rocket systems used to develop the Nike Ajax were re-used for a number of functions, many of which were given the "Nike" name (after Nike, the goddess of victory from Greek mythology). The missile's first-stage solid rocket booster became the basis for many types of rocket including the Nike Hercules missile and NASA's Nike Smoke rocket, used for upper-atmosphere research.

Carried on the XM34 rocket launcher, it could carry either nuclear or conventional warheads. It was primarily intended for use in airborne assault operations and to complement the heavier, self-propelled Honest John rocket systems. Development of the missile was started at Army’s Rocket and Guided Missile Agency laboratory at Huntsville, Alabama, the Redstone Arsenal, in June 1955. In June 1956, the first launch of the XM47 Little John occurred. The Littlejohn was delivered to the field in November 1961 and remained in the Army weapons inventory until August 1969.

The Aerobee rocket was a small (8 m) unguided suborbital sounding rocket used for high atmospheric and cosmic radiation research in the United States in the 1950s.
It was built by Aerojet General. The company began work in 1946 and test fired the first complete Aerobee from the White Sands Proving Grounds in New Mexico on 1947-11-24, it reached an altitude of 34.7 miles (56 km).