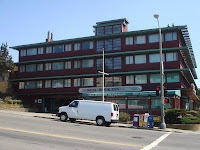 The first night we arrived in San Francisco with my friends Vincent and Come going to Half Moon Bay we stopped in the Cliff House for dinner. It was just a 100 m from our hotel, The Seal Rock Inn and it reminded me my hometown Biarritz. It was a really cool night...

all pictures courtesy of : the cliff house project The Cliff House is a restaurant perched on the headlands on the cliffs just north of Ocean Beach on the western side of San Francisco, California. It overlooks the site of the former Sutro Baths and a room-sized camera obscura and is now part of the Golden Gate National Recreation Area, operated by the National Park Service. 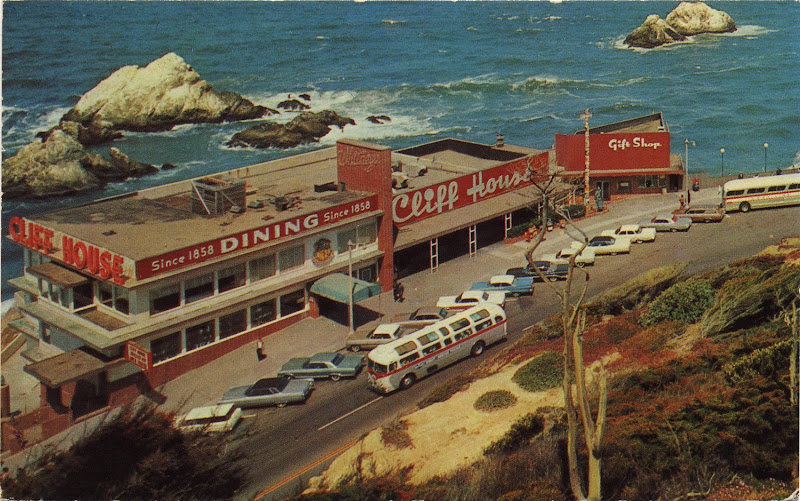 Cliff House has had five major incarnations since its beginnings in 1858. That year, Samuel Brannan, a prosperous ex-Mormon elder from Maine, bought for $1,500 the lumber salvaged from a ship that foundered on the basalt cliffs below. With this material he built the first Cliff House. The second Cliff house was built for Captain Junius G. Foster, but it was a long trek from the city and hosted mostly horseback riders, small game hunters or picnickers on day outings. With the opening of the Point Lobos toll road a year later, the Cliff House became successful with the Carriage trade for Sunday travel. The builders of the toll road constructed a two mile speedway beside it where well-to-do San Franciscans raced their horses along the way. On weekends, there was little room at the Cliff House hitching racks for tethering the horses for the thousands of rigs. Soon, omnibus railways and streetcar lines made it to near Lone Mountain where passengers transferred to stagecoach lines to the beach. The growth of Golden Gate Park attracted beach travelers in search of meals and a look at the Sea Lions sunning themselves on Seal Rock, just off the cliffs to visit the area. 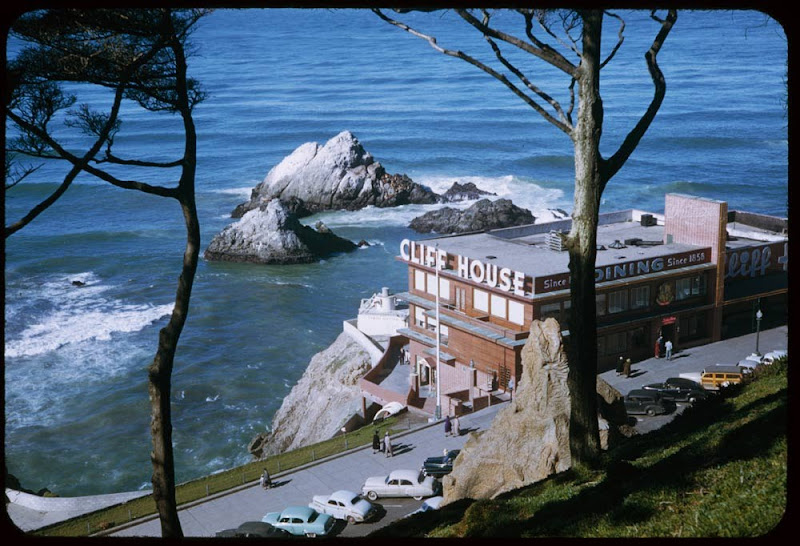 In 1877, the toll road, now Geary Boulevard, was purchased by the City for around $25,000. In 1883, after a few years of downturn, the Cliff House was bought by Adolph Sutro who had solved the problems of ventilating and draining the mines of the Comstock Lode and become a multimillionaire. After a few years of quiet management by J.M. Wilkens, the Cliff House was severely damaged by an explosion of the schooner, Parallel, that went aground under the reasons of dynamite. The blast was heard a hundred miles away and demolished the entire north wing of the tavern. The building was repaired, but was later completely destroyed on Christmas night 1894 due to a defective flue. Wilkens was unable to save the guest register, which included the signatures of three Presidents and dozens of illustrious world-famous visitors. 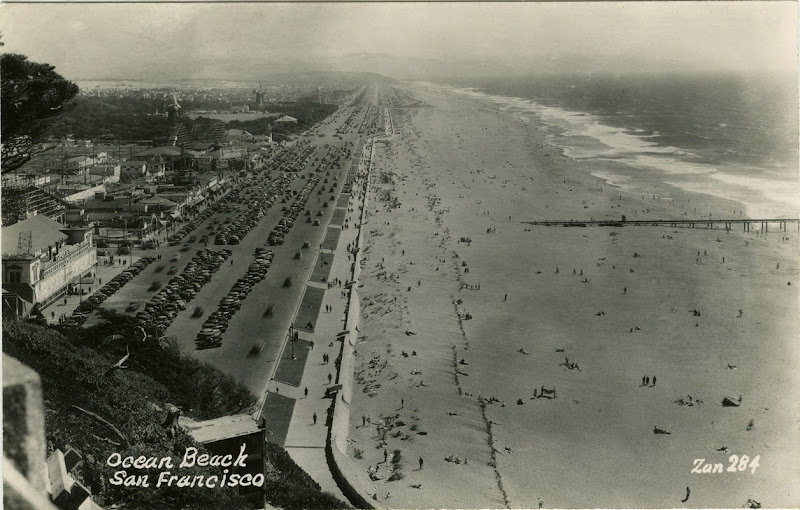 In 1896, Adolph Sutro built a new Cliff House, a seven story Victorian Chateau, called by some "the Gingerbread Palace", below his estate on the bluffs of Sutro Heights. This was the same year work began on the famous Sutro Baths, which included six of the largest indoor swimming pools north of the Restaurant that included a museum, skating rink and other pleasure grounds. Great throngs of San Franciscans arrived on steam trains, bicycles, carts and horse wagons on Sunday excursions. 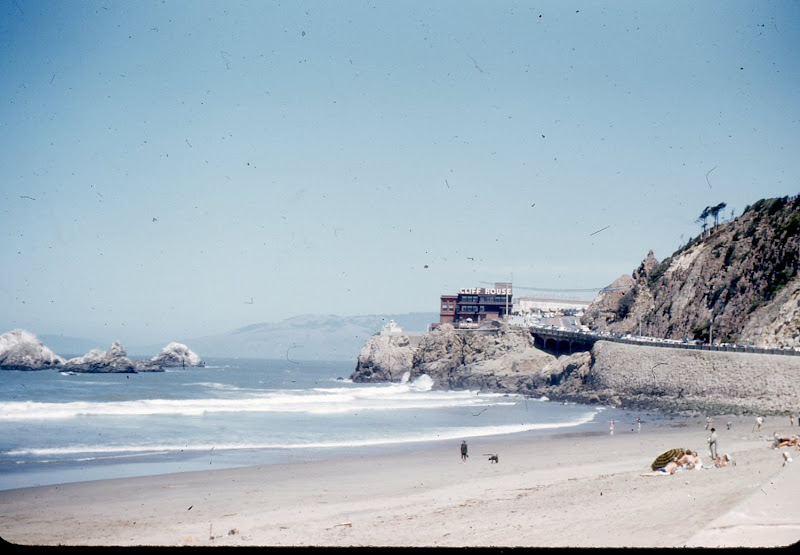 The Cliff House and Sutro Baths survived the 1906 earthquake with little damage but burned to the ground on the evening of September 7, 1907. Dr. Emma Merritt, Sutro's daughter, commissioned a rebuilding of the restaurant in a neo-classical style that was completed within two years and is the basis of the structure seen today. In 1937, George and Leo Whitney purchased the Cliff House, complementing their Playland-at-the-Beach attraction nearby and extensively remodeling it into an American roadhouse. The building was acquired by the National Park Service in 1977 and became part of the Golden Gate National Recreation Area. Many of Whitney's additions were removed and the building was restored to its 1909 appearance. In 2003, an extensive further renovation added a new two-story wing overlooking the Sutro Bath ruins. 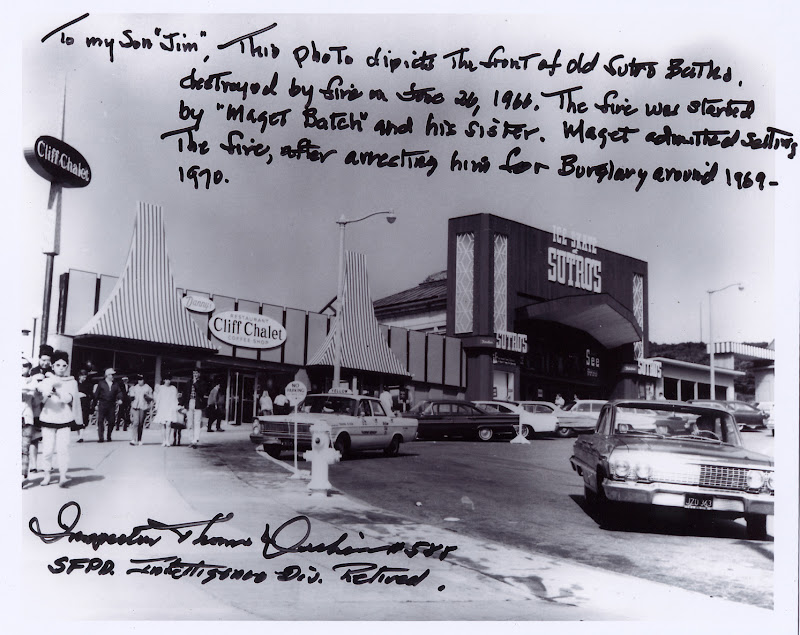 Cliff House in background, past Sutro Bath Ruins, 2008.The site overlooks the Seal Rock and the former site of the Sutro Baths. More than thirty ships have been pounded to pieces on the southern shore of the Golden Gate below the Cliff House. The area immediately around Cliff House is part of the setting of Jack London's novel The Scarlet Plague (1912).